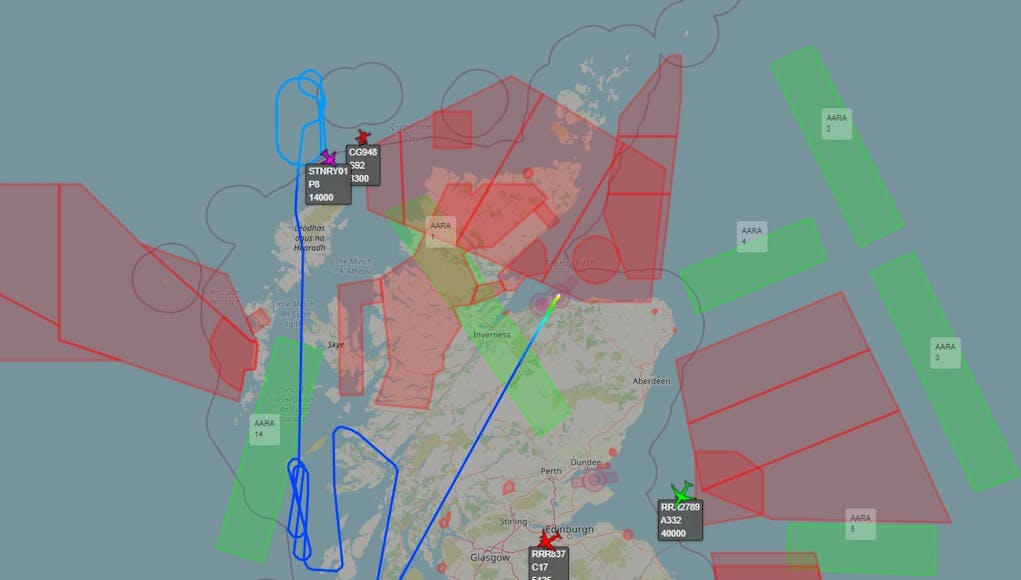 Why have I published this? Many people I speak to in the real world appear to still be under the impression that there have been no Maritime Patrol Aircraft in Scotland since Nimrod was retired. The point of this article is just to highlight that the aircraft are out there day after day.

Nine Poseidon MRA Mk.1 aircraft have been ordered for the Royal Air Force.

According to the Royal Air Force, Poseidon is primarily tasked with patrolling the seas, “hunting potentially hostile submarines and helping to defend our nuclear deterrent”.

The RAF added in a release last year:

“It uses the very latest in cutting-edge technology to detect, identify and monitor hostile contacts both above and below the waves. It can carry up to 129 sonobuoys to search for enemy submarines and can be armed with Mk54 torpedoes if required to attack enemy submarines. Our Poseidon aircraft are operated by 54 Squadron and 120 Squadron.“

I wonder if we’re buying the Mk54s with their flying kits or will drop them only from low(ish) altitude?

Nice to see the Brits once again having the capability to patrol their own waters.

Indeed Dan. A wonderful asset for the whole of the United Kingdom as is our Royal Air Force, the oldest in the world

Yes, Dan, something to celebrate and a reminder that a (US) friend in need is a friend indeed.

Hopefully this will now be a permanent state of affairs, and we never again lose this capability!

Well, a gap that has not been filled back up fully…

Nice to see and kudos to all the 5 eyes that enabled seedcorn.