An Embraer ERJ-145 operated by Loganair has declared an emergency over Scotland.

The aircraft, from Aberdeen airport, had just taken off before declaring an emergency and squawking 7700.

🚨 BREAKING NEWS | A passenger aircraft belonging to @FlyLoganair has declared an emergency over Scotland and is now returning to Aberdeen airport. pic.twitter.com/EfklkGIQR2

The aircraft is currently returning to Aberdeen, we have reached out to Loganair for more information.

UPDATE 3:55pm: It has been confirmed that the aircraft has landed safely.

“Following an alert on flight LM016 from Aberdeen to Norwich earlier today, the crew elected to return to Aberdeen Airport where the aircraft landed safely and normally. As is routine for such circumstances, emergency services were on standby to meet the aircraft on landing, however no action or intervention was required. All 27 passengers and three crew members disembarked the aircraft as normal and will continue their journey aboard a replacement aircraft. Safety as always is our top priority and we are grateful to Aberdeen Airport for its support and assistance.”

That’s a nice flight (on a clear day) off the East Coast between Aberdeen and Norwich. Used to be interesting as you flew past Leuchars with the F3s or early days Typhoons buzzing under and around you.

Glad all landed safely. Assume it wasn’t too serious or they would have dropped into Dundee. 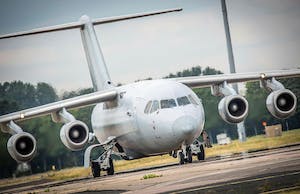