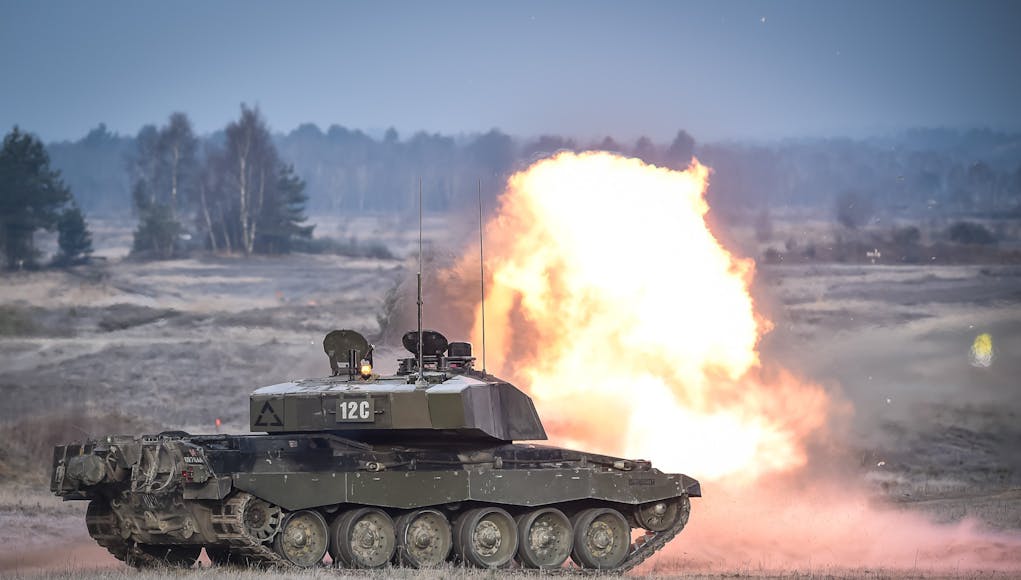 Soldiers from The Queen’s Royal Hussars (QRH) are currently utilising the vast ranges at Bergen-Hohne to conduct their annual live firing exercise.

Over the course of the 3-week intensive exercise they will be tested on individual drills, crew cohesion, teamwork and target accuracy.

Here, A Squadron can be seen firing down range with their Main Battle Tank, the Challenger 2.

The FV4034 Challenger 2 is a British main battle tank in service with the armies of the United Kingdom and Oman. It was designed and built by the British company Vickers Defence Systems (now known as BAE Systems Land & Armaments).

The Challenger 2 is considered to be one of the best protected tanks in the world.

The turret and hull are protected with second generation Chobham armour (also known as Dorchester). However, on one occasion, in August 2006, during the post-invasion stage of the Iraq War 2003 an RPG-29 was fired at a Challenger 2 that was climbing over a ramp, the front underside hull armour of the tank which was not augmented with an explosive reactive armour package was damaged, the tank subsequently returned to base under its own power and was quickly repaired and back on duty the following day.

As a result, the explosive reactive armour package was replaced with a Dorchester block and the steel underbelly lined with armour as part of the ‘Streetfighter’ upgrade as a direct response to this incident. To date, the only time the tank has ever been seriously damaged during operations, was by another Challenger 2 in a ‘blue on blue’ (friendly fire) incident.

It has seen operational service in Bosnia, Kosovo and Iraq.

That’s the live ammo budget used up for 12mths…the crew will have to shout out ‘BOOM!!’ when they press the fire button now, until the next MOD financial year starts

Challenger 2 the best tank ever produced by the UK.

Such a shame it never had an impact on export markets. I consider the major reason for this is the failure to mount the smooth bore 120mm main gun, the design of C2 makes this impossible.

The British army certainly needs to fit an active protection system to C2 to make it a viable in the decades to come.

Gun issues aside, what makes it so good? (Non-expert here trying to learn and wanting to know the counter-argument to all the “Challenger is past its sell by date” comments that I often read.)

Also re design of C2 making mounting smooth bore impossible. I thought that was being seriously considered at one point and was axed because of money. In today’s environment lack of funding would probably have killed the project stone dead anyway but what is it that makes it technically impossible?

C2 is the perfect combination of firepower, protection and mobility. This has been proven on the battlefield, whereas it’s rivals Abrams and Leopard 2 whilst excellent vehicles have proved to be vulnerable or less reliable. C1 suffered due to poor internal outlay which made it difficult for the crew to operate efficiently in battle conditions. C2 solved these problems. The Chieftain ,C1 and C2 were designed to be equipped with a rifled 120mm main gun which used separate bagged munitions (making storage easier but increased handling times) consisting of 3 seperate parts some which are stored in water containers to… Read more »

Thank you Mike. Really interesting and helpful. In retrospect such a shame that the decision was taken all that time ago to go rifled rather than smooth bore. Were there other reasons for that decision at the time beyond ease of ammunition storage?

There has been an on going arguement in the British army which is better, rifled or smooth bore since the 1960s.

For C2 it was probably politically more acceptable, cheaper and quicker to adopt a UK made modified rifled gun as opposed to buying a German made 120mm smooth one.

Not quite correct Mike, the Arjun has a rifled barrel.

Mike – sorry, incorrect. There is too much evidence – which you are not privvy to — to confirm otherwise. Lethality is a combination of many things – not just mizzle velocity or penetration depth. The round is significant. We use DU for CR2… which makes for a very significant impact (!) on the capability of the rifled bore lethality. Fact – CR2 has already been fitted with a SB L55 gun many years back. You cannot have seen the amassed hundreds of pages of information to “compare and contrast.

One of the main reasons for Challenger’s lack of export success, was the damage to the reputation of British tank design caused by Chieftain’s engine problems, but the main issue was Germany flooding the market with cheap second hand Leopards. C2 is a good tank, but it desperately needs a bigger engine and a remote weapons station at the bare minimum, an active protection system would be a bonus, but there simply isn’t the funding for any of these improvements.

I read the Challenger 1 still holds the record for the longest confirmed tank kill. The new Russian T-14 Armata is supposedly fielding a 125 mm gun. Artillery is still rifled (High explosive) but Kinetic energy rounds are subcaliber rounds (smaller than the bore) and aren’t effective if spun by rifling. So fins are stuck onto the penetrator to give it the stability lost by not spinning the projectile. Sabot around the penetrator provides a better gas seal and the smaller projectile achieves much higher muzzle velocity. Undoubtedly tanks still have a role to play, it saddens me that the… Read more »

There are reports that German Panthers and Tigers tanks were destroying Soviet T34s at ranges in excess of 3000 metres in the summer of 1944 in the battle of Târgu Frumos.

Would not surprise me.

Yes Germany did indeed flood world markets with second hand Leopard 2 tanks also that country has a restrictive export rules regarding the sale of armaments. KSA where eager to buy several hundred Leopard 2 but Germany refused to sell them. Interestingly the Leopard 2. does a design fault related to my earlier comments regarding ammunition storage. A large number of rounds are located in the front of the vehicle next to the driver. In combat this has proved fatal to the crew as the compartment lacks adequate side armour. Nothing like the test of combat to prove if a… Read more »

Healy changed the engine in chieftain,I know we changed so many.He did to keep a factory in his area in work.

There is a way to fire in camp using .22 mounting and small range in camp at rubber targets, we could do all the drills ready for gunnery camp each year,nearly won Canadian gunnery trophy one year,could never beat others who rebadged their crews,we never did this so they always had that advantage.