Home Air RAF and Luftwaffe team up over Romania 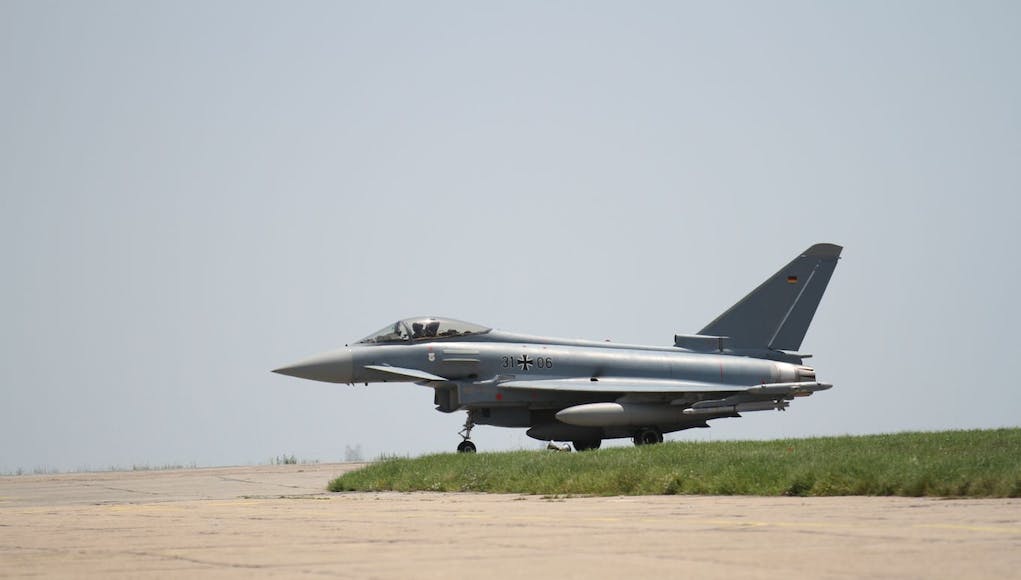 A detachment of German Air Force Eurofighter fighters have arrived in Romania to undertake combined Quick Reaction Alert training alongside the British Typhoon fast jets already deployed there, according to the RAF.

“Two German Air Force Eurofighters have flown into Mihail Kogalniceanu Air Base in Southern Romania to commence training with RAF Typhoons that are currently conducting NATO enhanced Air Policing patrols in the Region.

This is the third time since 2020 that both air forces have joined forces on active deployments as part of the bi-lateral Eurofighter Interoperability Enhancement programme. Under the current twinning programme the Luftwaffe and RAF will be flying combined training missions as part of a concept known as ‘plug and fight’. This training is designed to further develop processes by which air and ground crews can work side by side.”

“It is wonderful to welcome our German Air Force friends here to Romania; by working and training closely together with our NATO ally we are better able to understand our different ways of working. We want to exploit this training to operate our fighters in a combined manner to further reinforce our interoperability.”

Read more from the source here.

Just in time for the footie. Wonder who will be buying the beers?

Do Romanians still use MIG 21s and are there few in numbers,is this why UK GER Typhoons are policeing there sky’s ?

Romania has some ex-Portuguese F-16s. The mission is about curbing Russian agression..

Thanks James,but looks but my question needs Approval 🤔

Did the RA not buy 17 used F16’s from Portugal ? I’m sure they have received all of them by now.?

Am I missing something? This is a policing mission, but it’s suggested that for a change they are armed? Otherwise, what’s the point?

Yes , I’m not sure what is meant by the armed comment. Is it that last time they trained with the uk they weren’t armed as It’s hard to believe they would be given the policing role with no weapons. Mind you his is just one persons writing on the topic. Every humans knowledge can have some flaws in it, even mine

It’s the German aircraft being trained that will be armed for the first time while being trained. …or. is this just a way to get extra NATO airframes in region close to Ukraine after last week’s events?

Germany normally does (armed) NATO air policing in the Baltics.
It’s only recently that they started to train in Romania, getting used to the local flying conditions. So far they hadnt been armed.

This mission is meant to develop ways to work with the RAFs EFs in a joint setting, working to harmonize procedures etc. And use weapons from each others stocks. For which the Luftwaffe had to bring such stocks …

Is this really significant? – a mere 2 German jets join a NATO mission.

To many readers, yes.

GMTU from Durban.I read somewhere t’other day that Germany now has a Defence budget close to that of the UK. They must be in the process of some serious re-arming as there is no evidence of any major new assets or indeed numbers on the land,sea and in the air. Any explanation for this?
The Typhoon in my opinion is one of the best looking fighters ever built.

38 x tranche 4 Typhoons on order as of last year (order may increase to 90+) and orders for @15 x f18 anticipated next year which may eventually become 45. Also in Middle of taking delivery of 53 x A400 and have also ordered 6 x new c130. Research investment in FCAS ongoing. Some significant expenditure in the air sector.

This will be a significant contribution to NATO.

Around 40plus of the tornadoes are also being replaced by typhoons, the f18’s are purely for the nuclear role and growlers to replace the ecr tornadoes

Yes and no …. A significant force ‘if’ Germany is directly attacked (Poland at a stretch), of no use for any further wider NATO tasking, as Germany will sit back, procrastinate and let the US, UK and France do the fighting as they always do.

An unreliable NATO partner, we can’t rely on Germany to have our backs, far too energy reliant on the Kremlin to risk falling out with Putin.

German overseas deployments are still heavily restricted by German law, and German Armed Force’s are viewed very differently internally compared to the UK Armed Force’s. Mainly because of Germany’s past. The German military itself is highly trained, and very well respected.

While I agree the German armed forces are certainly well trained, the war ended 76 years ago, so using ‘the past’ as the excuse, is just that, a total excuse….

It serves them well, not to change anything and let others do the heavy lifting….

They were keen as mustard for us to fight alongside them during the height of the Cold War though …. Funny that!

I think it’s much more complicated than you are making out John.

Morning Robert, Its actually really straight forward to be honest. We have had 20 years of the war on terror and Germany has reluctantly played the very smallest part, it could possibly get away with and believe me, it had to be forced through considerable back channel pressure, to deploy anything to Afghanistan! Myself and many others, feel its time the Germans stepped up to the plate, stopped swerving their international responsibilities, rolled up their sleeves and took a ‘full’ part in operations. The Germans could (for instance) be militarily backing up the French in Mali, with combat boots on… Read more »

I had wondered if the restrictions had been lifted or did they still apply to the German Armed Forces .

Well, it was the Allies who insisted on making sure the German military would be rather weak when they put in a size limit as well as forbidding them nukes in the 1990 treaty on reunification (2+4 treaty). And that after half a century of telling these “militarist Germans” they couldnt really be trusted and should become as pacifist as possible, only defending themselves from the soviet threat if needed. Including all of hollywood, and of course the Brits constantly bringing up the 2 world wars (for the first of which they were arguably just as responsible as anyone else).… Read more »

All sounds like a giant job creation project to me …. Perhaps the RAF could buy some of the German A400’s and actually put them to good operational use?? Just an idea..

Hopefully they will never fire a shot in anger John and Europe will live in peace.

I dare say there is some job creation but thats no different to multiple defence project decisions in most leading economies….including the UK. Overall impact on economy often being the focus rather than value for money for the defence budget.

People always quick to criticise Germany for relying on others. Personally pleased to see them spill the euros on new hardware and UK economy will benefit hugely from that expenditure as well.

Hi Simon I wonder if the French/Germans will retire their C130’s once the A400 are all delivered? I think the A400 will have an air to air refueling capability.

To be jointly operated with French in a new squadron support of EU special forces.

The C160 fleet was substantial, but this was procured during the cold war, so it’s understandable.

I would imagine the 53 A400’s is representative of the same airlift capability as the once large C160 fleet?

Hard to understand, unless the Germans are planning to subsidise Defence with outsize commercial cargo services??!

If they aren’t, many of these airlifters will be sat about gathering dust….

Germany will be using 40 of them for their own purposes and plans to put 10 or so into a joint European unit, with 3 reserves in mothballs. And the main purpose of those 40 A400M is to be able, in an emergency, to do what they planned to do with the C160: Drop an airborne rapid reaction force anywhere in Europe, like Lithuania, hopefully to dissuade some little green men from doing something stupid. https://www.youtube.com/watch?v=c_L2qj5-3H4 One A400M can lift 8 Wiesel in one go, with room to spare for a bunch of grunts plus cargo. That means 40 A400M… Read more »

53 A400s is some fleet huh, That would take them above RAF AT capability surely?

I would certainly be interested to know how the number of 53 was arrived at.

It’s hard to see it as anything other than a political workshare move ….

Also, 183000 full time personnel compared to 150000 in the British armed forces. Each country has about the same number of reservists.

I’m speculating…but perhaps the heavy airlift capability allows a contribution to international efforts that doesn’t contravene their constitution ! Meanwhile it certainly looks like a major contribution to the Mali operations with just under 1000 German troops currently in country.

Again. Kit nay gave fallen out if operational readiness in past but some serious efforts / commitments currently being made

Suspect so. Maybe not the global reach of C17 but certainly a regionally serious capability Jamie.

Just on another subject leonardo have said if they are successful in the competition to replace the Puma, they will move all production of the AW149 to Yeovil

Hi George can you please tell me why apost about how Romania Aircraft numbers needs Approval ?