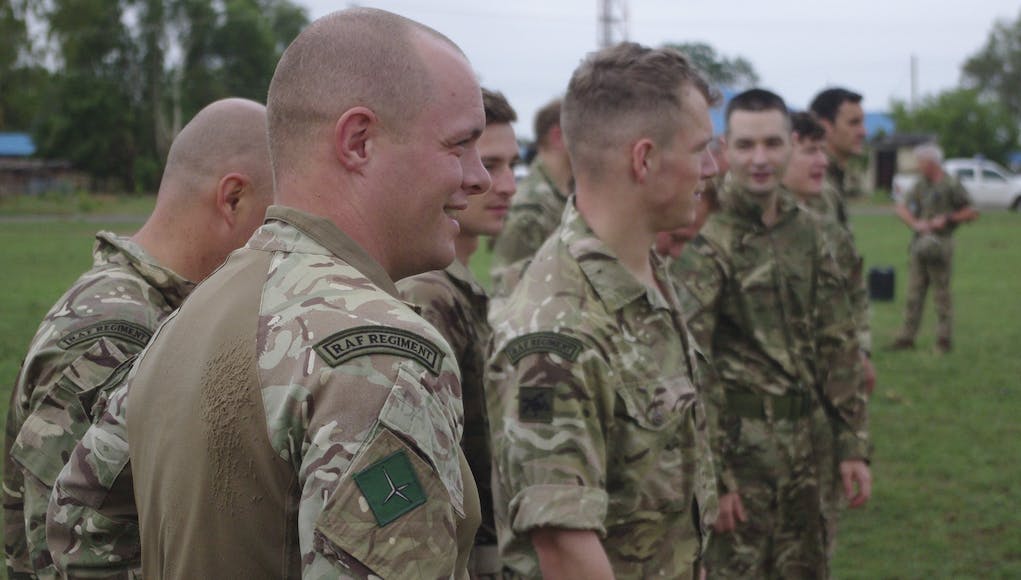 RAF personnel from RAF Lossiemouth have travelled to Kaduna, Nigeria to train the Nigerian Air Force Regiment and Air Police in Force Protection.

“The Lossiemouth detachment is made up of six specialisations from across the RAF, and has travelled to Kaduna to deliver intensive courses in Air Force Protection, military policing, conceptual planning, instructing and intelligence.

The Nigerian personnel undergoing training include personnel who will deploy to the North East of Nigeria to join the fight against Boko Haram immediately after the courses.”

SAC Jamie Massie (23), on his second STTT to Nigeria, said:

“It’s a great opportunity to work with a foreign armed force and share our skills and drills. I joined the RAF Regt to travel the world and it’s great to do it on the 100th anniversary of the RAF.”

The 5 FP Wg deployment is part of wider ongoing programme of Defence Engagement being conducted by the British military in Nigeria.  The RAF element is currently focused on delivering FP training to the Nigerian Airforce FP Force at the request of the Nigerian Government.

The Nigerian military is currently fighting Boko Haram in the North East of the country. Attacks on Nigerian Air Bases by the terrorists resulted in the request to the UK for bespoke Air FP training and 5 FP Wg have been tasked to share their expertise in this field over 5 years.

train them to do what? stag on? shoot their own body armour? those lucky Nigerians.

If you genuinely think the RAF Regiment have shot their own armour or that the ‘5 miles of death’ is a real thing, then congratulations, you are a genuine mong.

Haha mate if you don’t know the origin of that story then clearly you have no idea what you’re talking about. Cheers for the constructive comments though. Good effort.

Never under stood with all the defence cuts in the past, how or why these jokers have been spared. Afghanistan they didn’t prevent the loss of American Harriers a couple of them shot one another,need I go on. It would have been much value for money to giving the task in theatre of guarding RAF assets to the army a regularly Infantry battalion.

I’m assuming they’ve been spared during previous sdsr because the people that run defence see value in them. Of course, if you know better then I suggest running for parliament, working your way up to the cabinet and voicing your opinions. Idiots shooting each other unfortunately is common to all three services so probably not a good gauge on ability and I’m sure, given your obvious strategic excellence, that you are aware of the history of the RAF Regiment. Army units where charged with defending airfields and following Op Mercury it was decided a different solution was needed. Interestingly though,… Read more »

Don-this news bought back memories of a very enjoyable week I had at RAF Hullavington in the early 80’s with the ATC,id set my sights on joining the RAF Regiment but unfortunately medical matters got in the way.

Paul,
Funny you should mention that, as the Nigerians have been mostly ineffective against BH. All the gains that were made against them was done by South Africans. Google:
How Nigeria Engaged South African Mercenaries To Fight Boko Haram

That is not entirely true. I suppose the South Africans are still there after spending only 3 months in the country and keeping BH at bay to date? Google harder and Dom,t follow the usual narrative.

How is it that a big country like Nigeria cannot produce their own competent Defence Forces? It has been independent for close to 60 years,has vast oil wealth and a population 3 times the size of the UK! The RAF Regiment will give them the best training available but will the lessons stick? The men of the old SADF were tough and able soldiers as were those of the old Rhodesian security forces-the latter were made up in the main of Black Zimbabweans/Rhodesians. Race has nothing to do with it. The key lies in disciplined leadership, Esprit de Corps and… Read more »

🙂 It is such an open secret Paul that I don’t think anyone would object even in these ultra PC times!

That is not entirely true. I suppose the South Africans are still there after spending only 3 months in the country and keeping BH at bay to date? Google harder and Dom,t follow the usual narrative.