Typhoon jets, a Voyager tanker and a Falcon 20 playing the target have been practising Quick Reaction Alert skills today off the south coast of England.

The Open Source Intelligence Twitter account Intel Air & Sea followed the event earlier, if you don’t follow them then I’d suggest you go do that now.

How does Quick Reaction Alert work?

According to the RAF website, the National Air Defence Operations Centre (NADOC) at RAF Air Command, High Wycombe collates information from radar sites across the UK and from civilian air traffic and intelligence agencies.

“They decide the threat is sufficient to scramble Typhoon jets and pass the order to to the Control and Reporting Centres (CRCs) at RAF Scampton and RAF Boulmer. The CRCs have direct contact with the pilots at RAF Lossiemouth and pass on the scramble message. Pilots at RAF Coningsby are ordered to standby in the cockpits of their Typhoons. RAF Coningsby is the second QRA station in the UK.”

Essentially, the jets and their crews are at a moments notice to launch and intercept unresponsive or dangerous aircraft.

To read more about QRA, the visit the ‘Quick Reaction Alert’ section on the RAF website by clicking here.

Wondered why Boris1 was orbiting over South West, not usual AAR area, see it’s back off Norfolk again

Well the anniversary of 9/11 is approaching, so good to keep practising in areas where much inbound civilian air traffic flies.

If they had to take down an airliner not much time to react before it’s over heavily populated areas of the South east.

No way anyone in Goverment or Forces would give the order to shoot down Airliner. While over un/spars populated ecountryside they would dither, Even if they had the backbone by the time they gave order the the jets can’t just vaporise it so it would cause deaths on the ground and if it got over London they wouldn’t risk being to person to order shootdown as they would be blamed.

Or blamed when they did nothing and it flew into Canary Wharf and killed even more than would have died otherwise.

A direct line exists from the NADOC to Downing Street.

I have more faith than you that if it ever came to it action would be taken. Especially after the events of 9/11.

Before hand, with no precedent, I’d agree.

Trouble is heathrow approach flys right over central London all they have to do is act normal fly the authorised route, then shove throttles forward and nose down and decide which landmark to aim at. Nothing anyone could do 🙁 except build 2 more runways Gatwick and very fast trains into London an close Heathrow (tree huggers might go it)

Well, if a terrorist attempts the take over an aircraft that late in its flight or even just after take off from LHR then yes little or no time to react.

I would hope there are other arrangements we are not privy to.

yeh fully loaded 777/A330 with 100 tons off fuel taking off to east then just pushing nose over. makes for scary thoughts. perhaps making LGW main airport isn’t such a bad idea!!!

Wouldn’t make mych difference. Most planes take off westwards from LHR but I take your point!

Depends on time of day. They alternate west/east and north/south runways. I live right under the western flightpath and there are well established patterns

That’s interesting. Thought the majority was west simply due to the prevailing wind. Info I read was wrong then.
The approach was always by my experience over London from the Thames westwards after coming from one of the stacks.
Never seen one take off eastwards but its not a place I visit that often!
You live under the flightpath! Poor you!!!!!!

mornings are virtually always landing from the west, evenings are nearly always taking off to the west. at a certain point in the day they change it and also alternate between South and North runway (in normal times.) I’m happy to live under the flight path. planes are far quiter than they used to be and they still have a 1000′ or so height above. You get used to it and barely notice it after a while. The upside is a 10-15 minute transit to airport which is useful

A terrorist wouldn’t be able to get access to the cabin these day’s. Many procedures have been put in place both on the ground and in the air that make it extremely difficult for even the most determined bad guy.

Andy a
Reply to  Robert Blay.

No you mean badly trained suicide “donuts” can’t get access.
Thank god these suicide attackers so far seems to exclude people with average or above brain cells and bit of training or intelligence or the west would be in big trouble!!

Even worse, London City airport, the aircraft have to bank to avoid CW. Fact is, most large office buildings are nearly empty, so unless you go for a residential block, shooting down an aircraft is likely to create greater casualties over London

I hope they haven’t learnt from 9/11 the huge loss of life caused the whole Afghan issue, but taking out the Tower Of London or Tower Bridge / Statue of Liberty or Golden Gate Bridge would have huge media coverage etc, but without the loss of life no politician would go to ‘WAR’. PIRA learnt that certain things could be blown up without huge repercussions but kept them on the front pages 🙁

Scary to think it only takes a Rouge Pilot like (German wings scumbag!) To take out thousands of innocent people in London from Heathrow.

It actually seems far too easy to do… I wonder if planes will one day have computers that make it impossible to deliberately crash Aircraft, I hope so.

Fully agree Daniele, I’m sure the intelligence data would also play a part in the rapid decision before the airliner is taken down. Hopefully over the sea.
Cheers,
George

Dan don’t forget the hijacked Afghan airline which saw nearly everybody claim asylum in the Uk (Including the hijackers)
https://www.theguardian.com/uk/2006/may/11/afghanistan.immigration 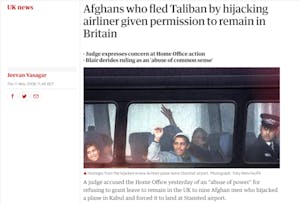 Indeed I did. They went to Stanstead.

The SAS came very close to assaulting that aircraft, If I remember correctly they threw a sick flight attendant out the aircraft and the sniper thought it was a dead body!

Look at how the QRA aircraft on 9/11 were sent away days before from the area and on the day sent in the complete opposite direction or told to stand down.

Suspicious Passenger planes in usa before 9/11 were intercepted within minutes! so for a handful of passenger planes to not get anywhere near intercepted and fly around for ages and especially near the capital seems dam deliberate.

Have they invited any Taliban observers to see what we can offer ?

Are these the tranche 1s that will we scrapped soon yeah?, how much better are the other tranche Typhoons?
Also could we keep the 1s as reserves? Or even give them to the Red Arrows as an upgrade? or will they get T2s. Sorry for all the questions guys lol

On another note, Chinooks have been flying up here around the moray Firth near Nairn/ kinloss, anyone know what they would be doing way up here?

So concerning to be reminded that we have only 2 UK bases operating Typhoons, no doubt just a QRA pair at each. Is this down to defence cuts in the last decade or so? All our eggs in just 2 baskets – not good.