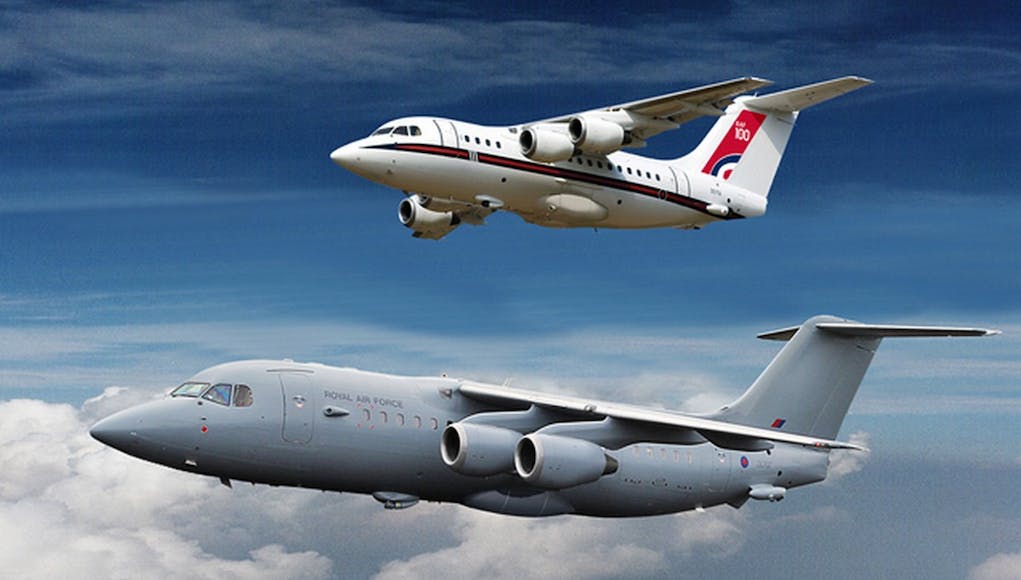 The RAF is looking to sell off its BAE 146 transport fleet, aircraft primarily used to transport the Royal Family and other VIPs.

Jane’s 360 was first to report on this news after noticing that the Defense Equipment Sales Authority (DESA) included the BAE 146 aircraft in a brochure at the Defence and Security Equipment International (DSEI) industry event.

BAE Systems converted the latter aircraft and delivered them to the RAF in 2013 when they were designated as the BAe 146 C Mk3.

Last year, BAE Systems was awarded a four-year £42 million contract from the Ministry of Defence for the support of the fleet of four BAE 146 aircraft operated by 32 (The Royal) Squadron from RAF Northolt in West London.

The contract commenced on March 1, 2018 and runs until 2022. There were reportedly options in the contract for extensions of one or two years.

Taking their place would be a refitted Voyager usually tasked with flying senior ministers to global events and summits.

The Voyager aircraft was refitted at a cost of about £10m, in order to save about £775,000 per year as the plane will be cheaper than chartering flights, delivering significant savings for the taxpayer say the MoD.

The Voyager is available for refuelling when not in use.

Is this the end of the road for 32 Sqn and the closure of RAF Northolt?

No chance. Project MODEL closed several MoD sites and their lodger units moved to Northolt. There is more there than just the RAF. The Defence Postal Centre and RLC Bomb Disposal as just 2 examples.

Even if the station becomes non flying the ground units remain.
It was used in 2012 too so it would be wise for Mod to retain the runway.

See to recall a buzz that RAF Northolt unit’s would move to RAF Benson when Puma force retired, but I think that was before the Puma was extended so now look at 2025. Also Heathrow new runway could effect Northolt and airspace management. Political pressure is now on to free up land for housebuilding, that Project Model money has been spent will not enter into the matter.

Well shows the utter farce of MoD management if that turns out to be the case with the money spent on the place! We shall see.

I think Northolt showed its importance during the 2012 Olympics – I don’t think it will close, too strategically important to London. Besides, it is a very busy civilian/business airport so the RAF don’t pay for all of it. Benson is not strategic and I see more chance of Benson closing particularly if the RAF doesn’t replace Puma or focuses solely (on more Chinook.) with regard to the 146 phase-out, its ok to replace with voyager as long as the RAF takes back some or all of those Voyagers leased to civilian operators. Otherwise a small immediately available fleet will… Read more »

They already have excess flying hours available in the 9 aircraft we have immediately available, so no need to bring the surge fleet back to brize to fly the odd politician and Royal around. ?

what about the tactical transport role? I accept that may have been an afghan-specific mission and may not be required now

Not sure to be honest, I guess the Atlas fleet is performing this along with the remaining Hercules.

I think
Reply to  Robert blay

The Hercules (SF) fleet is under-equipped and under-manned according to recent reports. Indeed, some of the short-bodied aircraft may be kept on. I doubt that fleet has capacity. Atlas is presumably too big for the need since I assume the tactical/146 capability is based on relatively small consignments. What exactly was the tactical/146 requirement, since it didn’t seem to exist before the afghan conflict (or 2010 when the cc3s were acquired.)

julian1
Reply to  I think

But without Benson, I’d Odiham hasn’t the space for the RAF SHF, hence the OCU ( 28 ) moving to Benson.

Spot on, the pressure to exploit that land for house building will be, eventally irresistible sadly. Matter of when not if I suspect.

I havn’t been past there in the last few weeks, but the runway refurb & resurfacing project was almost complete. A significant proportion of the movements there are civil. At just over 5,000 feet, I assume this would preclude Voyager flights. C17 is the largest I’ve seen there, Typhoon the fastest!

I’m not so sure – really great real estate and a good time to cash in. The roles that you mentioned can all be transferred to Army or Royal Navy management.

I’ve read that. Read that 2 planes might be converted/used as transports.

Indeed, not wholly surprised albeit the devil is in the detail when comparing the cost of running the 146 vs the PFI Voyager. Nevertheless the 146 has been largely been retired by most airlines from fare carrying service usually with an Embraer E-Series or Bombardier CRJ being the choice replacement. I think you are right to note that they might be too big for our needs albeit with modern engines that might not be that much of an issue. Something like the Embraer E-175 would be a tidy replacement if they were looking for something similar sized and available to… Read more »

Bring british airways under british ownership and send the royal family out on their travels on these.Would be great advertisement = cash for the british.

I flew on British Airways when it was in public ownership. From a service standpoint, not to be recommended.

Thank god. Get rid of those stupid QC models. They were utterly useless.

Sad-in some respects marks the end of all-British designed and built commercial aircraft even though of course, production ceased in the UK many years back. The decision to sell our stake in Airbus some years back means that the UK now is essentially a sub-contractor to the EU and Americans and with no real say in Airbus going forward.
As I said-sad.

On a related topic it would seem i touched a nerve with my comments about the Shipbuilders Union on the Clyde on another topic. My overwhelming view of Unions is that almost all of them are organisations made for conflict with little interest in the workers they are supposed to represent. Their bosses live the good life out of the contributions of thousands. Here in South Africa militant Unions have wrecked the economy particularly in the mining Industry and their leaders live lavish lifestyles that would make Marie Antoinette blush!!

What about buying/leasing a couple of A220s. Wings, tail and nacelles made in belfast.

Flew in the Avro built version here in SA. Anyone know what the rationale was for 4 engines on such a small aeroplane?(without Googling it 🙂 )

It was envisaged when the 146 was developed that it would have a strong market in Africa, the Aircraft was designed to be able to operate off rough dirt strips in remote locations. One issue with operating out of remote dirt strips is if one of the engines fails there is no ground services available to repair it. To that end the aircraft was designed with four engines to allow redundancy and can safely take off with only three engines working. The aircraft was certified with that capability. As it happened the expected sales in Africa never came to be… Read more »

Sad, I like the look of these aircraft,they look good,

Yes, and to come to an end. I remember the prototype buzzing over Hatfield. Sounded like a vacuum cleaner. The magnificent de Havilland is no more, the might Hatfield aerodrome reduced to a business estate and food delivery service. The history of the 146 was a dogs dinner. Like the rest of the British aircraft industry and Governments over the years – naive fools. But what might have been with a bit of leadership and vision…

With a done Brexit, you imagine these aircraft will have less use – no flights to Brussels anymore!

Considerably premature to plan selling them, isn’t it?

A bit sad, but not exactly the most crucial capability to lose. It will be interesting to see if the QC aircraft are replaced as there obviously some reasoning/ niche that they were acquired for.
A few Spartans may make sense? As they share components with C130j. But probably not worth it. We coped before Afghan without these.

Wasn’t there a plan to convert 146’s to cheap refuelling tankers.

It along with the Hercs were some of the few aircraft that could fly slowly enough to aerial refuel helicopters. The A400M generates a lot of turbulence behind the wings from the props and the standard 90m drogue was too short necessitating a 120m long drogue line. Airbus are still trying to find a solution of using the A400M to aerial refuel helicopters. BAE did investigate using the 146 as a tanker for helicopter refuelling, but the Mod never took up the option. BAe also looked at developing a maritime patrol variant as cheap alternative to the Nimrod, again it… Read more »

DaveyB. I mention above the possibility of Border patrol / fisheries protection after Brexit.

Border patrol / fisheries protection for a few years after Brexit.

In that case a 4 year contract will need to be renewed several times!

What I find odd is that a 4 year support contract was signed only a year ago. If this story is correct it suggests a lack of planning somewhere.

Flogged off to be Waterbombers’ in the USA.

A lack of planning? Who’d have thought!

A lack of planning? Who’d have thought!

This was exactly what I was thinking. But rather bringing here to the USA they’d stay there to be available for your wild land fire protection or at least other neighboring countries. They are a heck of an aircraft for fire drops here. Very well worth to have them to be retrofitted for such thing.

Typical MOD farcical, amateurish, ambivalent toss. The money that is wasted is incredible and no one gives a toss. I tried for a number of years to introduce life cycle management using guidance applicable to MOD. Doh!