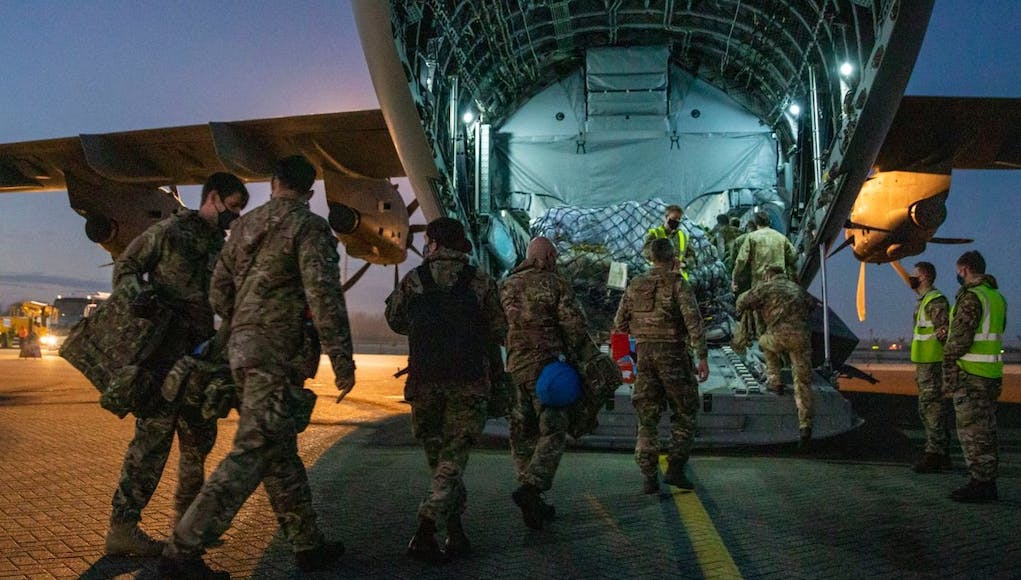 According to the Royal Air Force here, the advanced party led by Lieutenant Colonel Tom Robinson, the Commanding Officer of the Light Dragoons, flew out to Mali on board a LXX Squadron A400M Atlas transport aircraft last week.

“The main contingent followed on 3rd December on board another Atlas, which after a refuelling stop at Gibraltar flew into Gao Mali.  The full deployment is planned to be completed by early next week. The new British Army mission is to provide the ongoing UN mission in Mali with a new long range reconnaissance capability that will enhance the UN peace keeping mission.  All UK UN personnel will be based at the UN camp in Gao at the newly constructed Camp Bagnold, which is named after Brigadier Ralph Alger Bagnold.”

“The 300 strong Light Dragoon task group is joining over 14,000 peacekeepers from 56 Nations as part of this challenging UN mission in Mali to help protect the people from violence and support political dialogue. We bring years of experience on operations, first class equipment and exceptional people. We’ve trained hard for the last year to make that we are ready for this challenging mission. We’re proud to be the first British soldiers to join in this team effort to help combat instability in the Sahel.”

It is understood that the new mission is separate to the ongoing RAF operation that has three Chinook helicopters conducting combat support operations as part of the French coalition that is conducting counter insurgency operation in Mali.

Well done the boys and girls of LXX squadron! Worked with them for many years. Good aeroplane good people. Keep up the good work.

With the army taking over old RAF stations…would it be easier for the plane to go to the troops and pick them up rather than move troops and equipment to Brize ??

Easier for the troops maybe, cheaper for the MoD as a whole, no. Given the costs associated with running an operational airfield, additional fuel and maintenance implications of additional take-off’s and landings.

That would make some sense, ive just had a look – the Light Dragoons are based at Catterick Garrison so they would have had to travel to another Location anyway.

Leeming is nearby. Places like Rock Barracks ( Woodbridge ) and Wattisham have army units garrisoned and an operational runway.

As Ian says, I’m a fan myself of keeping army aligned with airfield infrastructure.

No idea on costs though.

Cost would be a massive issue, but the logistics in general are a nightmare, so sorry if this is a bit ranty Daniele. 1) You can’t just have a runway and land on it like a parking lot (at least not in the UK). You need functioning infrastructure, air traffic control, assurance, and certification. Even maintaining a airfield as an emergency landing strip is a surprisingly resource heavy endevour. 2) Most airfields on Army Airbases would be lucky to see 1 flight per year, even if it was 10x that amount of traffic it would not make sense to maintain… Read more »

Not at all ranty, a thorough demolition and explanation of the pitfalls.

I still see the advantages in a balloon gone up, need to expand situation like wartime with your point 2 though, as the RAF could then provide such services and the runway would be available rather than built on and lost like so many.

A sort of keep on MoD estate just in case scenario.

Agreed there are advantages if the balloon goes up but those are surprisingly limited. You still need to create additional defence estate, but now you’re just pushing the burden off of building an airfield and onto the army which you have just evicted out of their Barracks. Made worse because (assuming this is a big war that required major infrastructure investment) you’re now having to build an Army Camp, while re-building an RAF one, instead of just building an RAF camp. IRL I think if the RAF needed a major uplift in airbases for a war you’d simply see places… Read more »

Also: Thank you for the kind words XD
And just to sort of make clear: I think Points 1 and 2 ultimately lead into Point 3. You can give RAF airfields over too the army, but unless there is an outside agency that is forcing their maintenance (AAC, Civil Aviation, RAF willing to pay for upkeep), then that Airfield will quickly reach a point where you can’t simply rock up with a RAF ground crew and quickly set up a RAF station.

No worries. No issues from me on being thoroughly debunked! ??

There’s pesky things like Flight plans, air traffic control etc you need to keep in mind however…
You don’t need to worry about that with a white bus.

Another police action with no end in sight. Ugh

Jesus dan can you be ever more stereo typical lol.

Not saying we shouldn’t contribute, but it should always be in support of a popular government with the will of the majority of the population as changing regimes or try to prop up corrupt ones tends not to end well.

The deployment is under a UN banner.

It’s also selerate from the French counter insurgency campaign and this time we are taking a fairly low commitment, compared to the size of the overall UN mission.

Considering the French losses have been pretty low to date, I also assume it’s a different level of conflict to Iraq/afgan.

Why are British troops deployed in a French conflict zone without British parliament approval ? Why are we doing the French dirty work when they want us to suffer economically often??

We are not doing France’s dirty work. Isis is a major problem for the western world…witness the outrages that have been committed in this country. The French are taking the lead in combatting Isis in sub-Saharan Africa ….good for them. It is only right that we give assistance where needed. Xenophobia is very unattractive, as is deliberate ignorance!

I do think James makes a fair point in so far as they are kicking sand in our face in several respect right now.

Confronting Isis is not Brexit….why conflate the issues. Brexit came about as a result of idiot decision making…..we are now seeing the consequences!

Hmm “idiot decision making”, it came about because slick boy Cameron gambled on winning the referendum and being clapped back into the EU parliament, hailed as a returning hero….. Something Warmongering Blair would never have allowed us to have by the way. It blew up in Camerons face, because these things happen when you allow the British public to do a dangerous thing like actually have a say about their own future. Anyway, don’t be surprised if a trade deals already been agreed, all sides are currently engaged in a standard face saving diplomatic dance, to appease their respective domestic… Read more »

Pretty much, but then he has a track record so hardly surprising.

The irony of the racist repeating himself and calling other people scratched records.

I’m sorry you’re having trouble moving on Herodotus, I respect your position on Brexit and find it rather sad that you can’t respect the vote of the majority and many that contribute to this generally excellent forum.

To be fair, the general sneering and superior attitude of elements within the remain camp, certainly helped them loose the popular argument and as a result the vote, so perhaps there’s food for thought there….

A little strong James …. First off we work closely with our French colleagues in these sort of operations.

As the pre eminent European countries in terms of defence capability, it’s only right we step up to the plate and do our bit in these UN mandated operations.

My personal caviats would be that there is a clear mission goal and exit strategy and yes, any serious escalation of our involvement is greenlighted by parliament.

Even the Germans are getting involved, I believe they have sent a strongly worded letter to ISIS, registering their disappointment in their bad behaviour…..