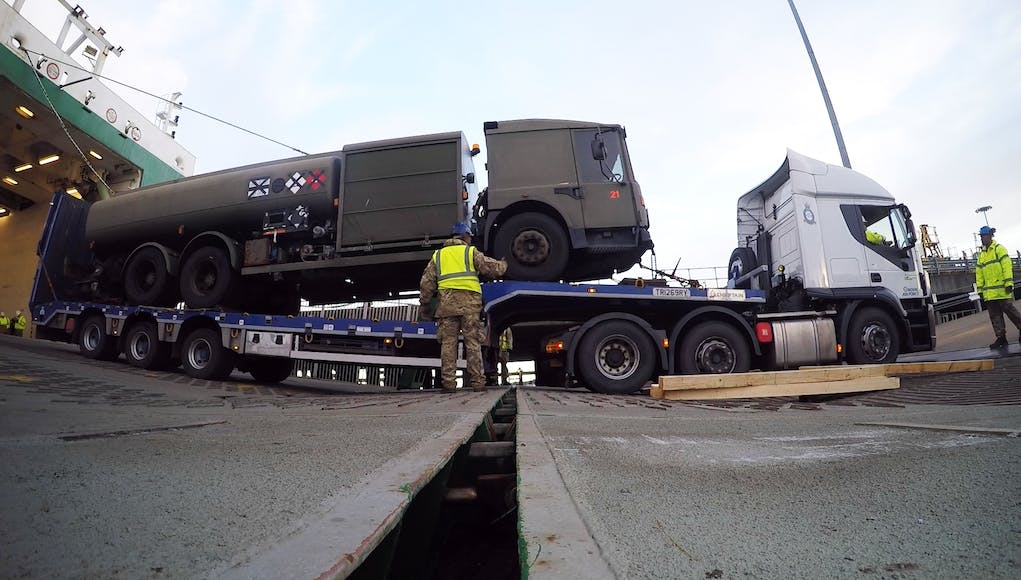 Royal Air Force vehicles and supplies have sailed from Southampton to mark the start of a new deployment to Estonia, say the RAF.

The mission, announced last year by the Secretary of State for Defence Gavin Williamson MP, will see four RAF Coningsby based Typhoon jets deploy to the Amari Air Base in Estonia. According to a release:

“On arrival they will conduct NATO Air Policing activities over the summer alongside other NATO Allies. In Estonia the RAF deployment will complement the already deployed British Army Battlegroup that was forms part of the NATO Enhanced Forward Presence mission.  Both operations are a part of the British contribution to the NATO Assurance Measures agreed by the Alliance at the NATO summit held in Warsaw during 2014.

The vehicles, including aircraft tugs, fuel bowsers and other speciality equipment, boarded the cargo ship MV Eddystone at the Army’s Sea Mounting Centre for their five-day journey to Estonia to support NATO’s Baltic Air Policing mission.  Also, on board are British army vehicles including Challenger 2 main battle tanks destined for the British Army Battlegroup.”

The release also added that the responsibility for getting the RAF vehicles from their bases in the UK to their new temporary home at Amari was given to drivers from RAF Wittering based No.2 Mechanical Transport Squadron RAF.

Flight Lieutenant James Eyles, from the Cambridgeshire based squadron said:

“The squadron is involved in the three phases of the operation; the deploy, the sustain and the recover. Once the equipment is there and the operation is up and running, a small team will remain to manage a fleet of more than thirty vehicles and provide aircraft refuelling for all the Typhoon jets 24/7.”