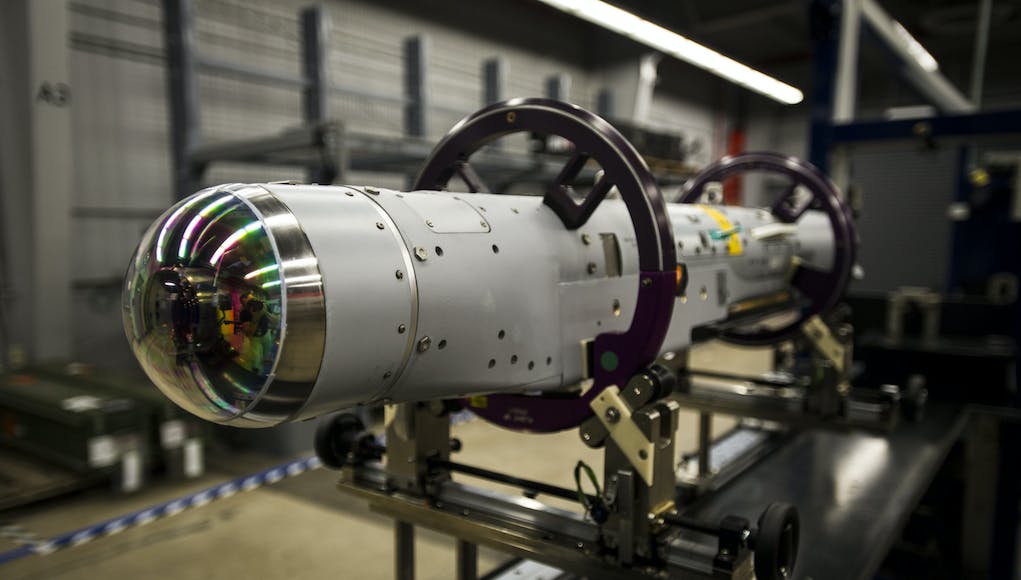 Raytheon say they have completed the first guided release of a StormBreaker smart weapon from an F/A-18E/F Super Hornet.

The aircraft will become the second fighter jet to add the weapon when the project reaches initial operational capability later this year, say the firm.

During the U.S. Navy flight test, Raytheon say that the StormBreaker safely separated from the jet and successfully received guidance data from the plane, enabling it to be directed to its target while in flight.

“StormBreaker features a revolutionary tri-mode seeker that uses imaging infrared and millimeter wave radar in its normal mode. The weapon can also deploy its semi-active laser or GPS guidance to hit targets. The F-15E Eagle is the first platform to add StormBreaker; it’s also being integrated on the F-35 Joint Strike Fighter.”

Much Brimstone tech in these?

I doubt it, the US tends to do it for itself. They appear to have caught up with the Brimstone capability mind. The RAF have had something of a monopoly in this field for 10 years or more.

Does Brimstone have all weather capability does anyone know? Ratheon are claiming Stormbreaker is the only weapon with that capability (including dust clouds).

Sad we were not able to make it count in terms of sales. Both France and Germany have admitted it fits their requirements but since it isn’t made there they will just do without. Looks like Poland is keen on them though so hopefully the put in a substantial order.

Seems that the Americans are re-inventing the wheel. Dual-mode Brimstone is all-weather: https://www.army-technology.com/projects/brimstone/

dan
Reply to  Will

A comparable U.S. weapon to the Brimstone would be the JAGM that is now in production. It features semi-active laser with millimeter-wave radar sensors for stationary and moving land and maritime targets in bad weather or obscured conditions. The Stormbreaker is a totally different weapon with different capabilities. Tri-mode seeker, much longer range, ect.

Hi CR. SPEAR 3 is the competitor to Stormbreaker (aka Small Diameter Bomb II) rather than Brimstone, Stormbreaker being a glide bomb, while SPEAR 3 is turbojet powered, for something like 2x range plus loitering option. As to your question, according to MBDA, SPEAR 3 “… is designed to precisely engage long range, mobile, fleeting and re-locatable targets in all weathers, day or night, in the presence of countermeasures, obscurants and camouflage …” which seems to cover most scenarios. Stormbreaker has a tri-mode seeker, Brimstone has dual-mode seeker, i.e. no imaging IR, while SPEAR 3 AFAIK has only been described… Read more »

Rudeboy
Reply to  Glass Half Full

FYI – SPEAR 3 is the MoD Programme NOT the missile. The missile is now called the MBDA Spear. MBDA have caused a lot of confusion by pinching the name… Nothing has been heard on how many seeker modes Spear has. As you point out we know that at the least it will have MMW radar, Semi-Active Laser and GPS/INS and a 2 way datalink. MBDA have also proposed an IIR capability in the past to be added to the Dual Mode Brimstone. But….there was interesting point made by the MBDA Spear Programme Director recently at an RAeS lecture. He… Read more »

Glass Half Full
Reply to  Rudeboy

Thanks for the update, I hadn’t heard about SpearGlide. Let’s hope the MBDA Spear family gets wider adoption to help lower costs across the board. I use SPEAR 3 because most know what that means in terms of what is now the Spear missile but yes SPEAR Capability 1-5 is the series of programs. I understood from other feedback that SPEAR Capability 4, an upgrade of Storm Shadow, had been cancelled – is this your understanding? The last program I am aware of is SPEAR Capability 5, the Storm Shadow replacement, which would be FC/ASW if that program holds together,… Read more »

Rudeboy
Reply to  Glass Half Full

The Storm Shadow/SCALP MLU was signed in 2018 so is still going ahead (might even be underway at present). But the numbers were for around 400 Storm Shadow for the RAF and only 100 for France. This means the UK stockpile was being cut in half and the French stockpile being cut from 400ish to 100. Absolutely bonkers… Think Saudi, Kuwait and Oman will go for Spear. The Germans appear to have interest in the Spear-EW version, and that may lead to normal Spear. But they’re all Typhoon users, the trick will be getting a sole F-35 user onboard. Looks… Read more »

Glass Half Full
Reply to  Rudeboy

Thanks. Hopefully once supported in F-35 Block 4 s/w it will be attractive to at least other European F-35 users, particularly if it offers a superset of SDB I/II and maybe MALD-J/X capabilities, with a plus of significant commonality across all options. Seems like a good fit for the Italians at least and I suppose if we add flying pigs to the inventory then the French might be interested, despite apparently no French content.

Does anyone else have anything like this currently, i.e. jet powered, quad pack inside F-35 weapons bay?

Yes, Brimestone is all weather capable. It uses a multi-mode sensor made up with an active RF (see through water and dust clouds) and laser sensor backed up with a combined inertia navigation unit and GPS.

None. Brimstone is an MBDA product with UK IP. The Tri-Mode seeker for StormBreaker (SDBII) was developed by Raytheon for its entry in the US Joint Air to Ground Munition (JAGM). This is a missile to replace Hellfire and is successor to the failed Joint Common Missile (JCM). This is a US Brimstone equivalent, but has yet to arrive in service. However, JAGM looks like it is only destined for helos and UAV’s. JAGM appears to have far less range than Brimstone 2/3 and has yet to be funded for integration to fast air platforms. Raytheon actually lost that competition… Read more »