The U.S. Air Force has given Raytheon a contract to deploy two prototype high energy laser weapon systems to protect its units overseas.

“It can target a single drone with precision. The HELWS is paired with Raytheon’s Multi-spectral Targeting System. It uses invisible beams of light to defeat hostile UASs. Mounted on a Polaris MRZR all-terrain vehicle, the system detects, identifies, tracks and engages drones.”

“These threats aren’t going away, and in many instances, shooting them with a high energy laser weapon system is the most effective and safest way to bring them down.”

The contract follows successful demonstrations of Raytheon’s directed energy systems for the US Air Force and the US Army.

https://petition.parliament.uk/petitions/268589
Please sign this new petition.
We need to expand our royal navy and stop leaving our country exposed physically and diplomatically.
Please support this petition to let our government know its not only required but wanted by the people. 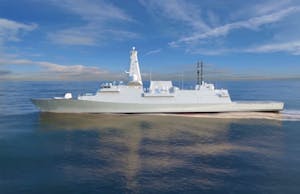 July 20, 2021
The MoD has confirmed that resources have been allocated for the next batch of five Type 26 Frigates to be ordered on the Clyde.