Home Air Red Arrows to tour the USA and Canada 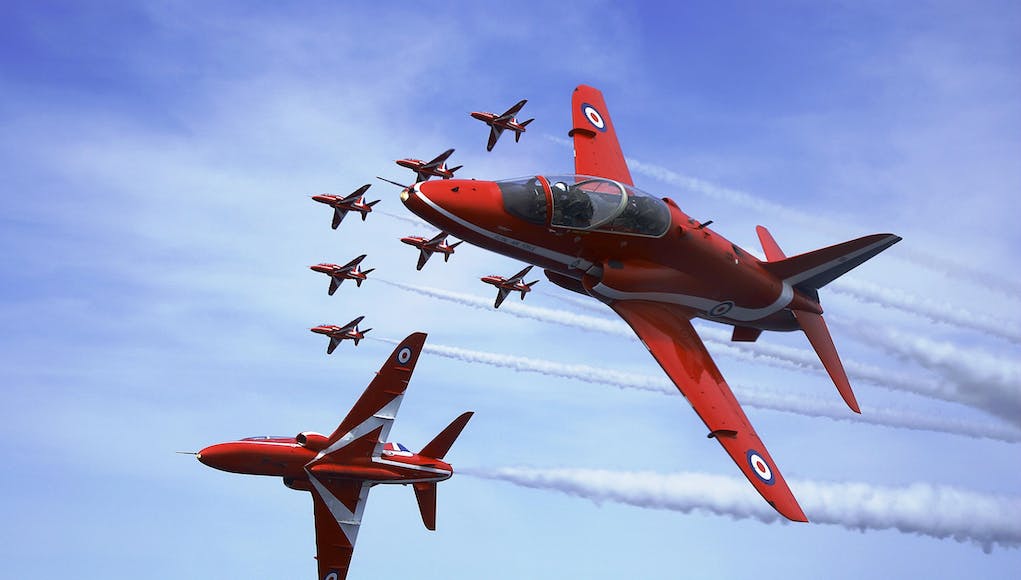 The Red Arrows will fly to North America for the Western Hawk 19 tour and will travel across two nations with ‘a view to promoting trade and co-operation’, say the Royal Air Force.

The Red Arrows will display at several US air shows and areas with strong UK links – the first time they have done so in more than a decade.

“The Red Arrows are an international symbol of Britain and this landmark event will generate a significant amount of investment. It is only right that, after more than a decade away, they return to the home of our closest defence ally.

Previous tours, which include China, Greece, Jordan, Saudi Arabia, Kuwait, Qatar, Oman, Pakistan and Bahrain, have led to the UK gaining as much as ten times in sales and investments as the cost of the tour.”

“One of the key roles of the Red Arrows is to support UK interests overseas and this major tour to North America will provide an important opportunity to both showcase the best of British and highlight the strong relationships we have with the US and Canada.

The deployment will build on the recent successful Red Arrows tours to China, the Far East and Gulf regions and the team is already preparing extensively – to present a safe, memorable and visually-exciting formation display to new audiences across the Atlantic.”

Now how about some new T2 please? Eventually.

I would actually like to see the RAF purchase the Hawk 200 or even better the Advanced hawk for operations where air superiority is available. They would be cheap to operate and cheap to maintain. It seems crazy using Typhoons to hit a few terrorists in a ditch…

I’m in your camp on that.

There are counter arguments that have been stated here many times though.

Or just keep the Tornados for the same role.

Tornadoes are more expensive to run and maintain and that cost will increase as time goes by.

More expensive to run than to purchase x amount of Hawk 200s and then run them?

@Steve, Yes, the Tornado would be a lot more expensive to maintain – so long as the question implies buying something like a Hawk 200 and operating it for several years. The purchase cost is almost always a comparatively small part of the through life cost of a platform.

Tornado costs go up dramatically once the spares recovery (or reduce to produce) stops churning out spares from what was a large fleet, to keep a smaller fleet going. That point has been reached.

Hawk 200 has been out of production since 2002, it might well be cheap to operate and maintain but the act of procuring a modernised version would be to draw scarce funding away from other programs that are more needed!

There are many other things that I would prefer spend on than buying a Hawk 200 variant!

The Bae systems and India are currently working on the Advanced Hawk (I think based on the 200). The saving on our Typhoon airframes would be beneficial going in to the future as the Typhoons will last longer and need less maintenance. Plus with the number of missions being carried out in Syria I imagine the hawks would pay for themselves.

The only way they would save costs on Typhoon is simply not to fly them, the cost per flying hour is the same regardless if the aircraft is flying over Syria or Lincolnshire, with the exemption of live ordnance cost.

Yep, and they are not going to be doing the sort of flying rate in training as they are in Syria right now.

The Advanced Hawk is a development from the Hawk 132 and has no connection with the 200 series.

If we want something cheap to drop 500lb bombs in the Sandpit we already have Reaper and will be getting the Protector RG.1 soon.

Adding another Hawk variant for such a spurious reason when we have other platforms that can do the job is nonsensical!

Definitely. Get a two or three squadrons of advanced hawk for low intensity conflict. They can do QRA or be the hand off from the typhoons once the initial intercept has happened. Where we have air superiority that can be used instead of more expensive assets, and can also be used for intelligence/search functions too. Finally you get to use the same as training craft and for red arrows. From an initial cost perspective For one f35 you get 6 hawks price wise (£18 million I think). There are ofcourse other costs too but all of this money would go… Read more »

“Definitely. Get a two or three squadrons of advanced hawk for low intensity conflict.” We already have Reaper and soon Protector to perform the low intensity roll. “They can do QRA” Only if they wait patiently for their target to come to them or we develop some telepathic system to get them up early enough to intercept outside our airspace. “or be the hand off from the typhoons once the initial intercept has happened.” As per my above point how can they perform the initial intercept and then handoff to Typhoon when the latter will arrive at the target first?!… Read more »

The UK has left it too late for the Hawk, the Advanced Hawk has no backing from India and the Boeing TX will take most NATO and allies orders imo. It’s highly likely the TX will also develop into a light attack platform also cornering that market also. Boeing and SAAB invested 2 years and their own cash into a clean sheet design. BAe have had over 1000 orders for the Hawk and have failed to invest in a new airframe. Almost all updates to the Hawk have been paid for by customers. Other than drones the UK could invest… Read more »

Absolutely wonderful reply, a very rare well informed reply to the above comment, well informed commentators are becoming increasingly rare on this site. All i see are fantasy fleets and totaly un-realistic views about our armed forces and how everything is funded.

I am not going to in a pint by point answer, and by all mean this is not fantasy fleets you still get a capability just not high end. However if we don’t invest in our manufacturing and sustain it as well as use that capabilities in our forces it will disappear and we will end up buying everything from abroad. Eventually there will be no money to buy that as the taxes will not be raised in the first place. Hawk may be aged but not everything needs to be latest tech, and with the advanced hawk upgrades it… Read more »

“I am not going to in a pint by point answer” I am “and by all mean this is not fantasy fleets you still get a capability just not high end.” It is fantasy fleets, it is a capability that the RAF has expressed zero interest in…not even a hint of a concept study let alone an RFI. We already have low end capability in the form of Reaper and soon Protector as well as Shadow R1 in the ISTAR role. “However if we don’t invest in our manufacturing and sustain it as well as use that capabilities in our… Read more »

Could not agree more. The Hawk 200 was and still is a perfect low cost but high spec aircraft for the right role

The Hawk is perfect for destroying a couple of Toyota pick-ups with a machine gun or 20 mm cannon in the back. You don’t need a Tornado or F-35 for that. With modern methods of CAM a production line would not cost as much as in the past.

Exactly. We need to invest and use it (or we will lose it) with all the other knock on effects.

Anyone know how much life is left in those airframes and what we replace them with when they need retiring?

Only RAFAT get as far as 2030, the rest drop off in the intervening years.

80 Hawk T1/T1A had their centre and rear fuselage sections entirely replaced in the 90’s and 00’s so they can slog on for a few years more.

The UK will probably be purchasing the Boeing TX to replace the Hawk, can see Boeing offering a tag on deal to the 350 ordered by the US.

Such a shame the UK Gov are closing the ?? Red Arrows ?? UK base, RAF Scampton! The base 617 squadron were based and left to go bust some dams in WW2! We shouldn’t close this base! We aren’t going to have any bases left at this rate! We should sign the save scampton petition guys.

I do agree that some of these bases are just not viable to keep open. However I do think we should keep parts of some of the bases (the runway and some apron) in order to be able to make them partially operational again with a small effort. We may need some of them again in the future and will run out of places to put runways… Not sure how viable that is but it seems like if we needed to suddenly grow our air force then we might struggle with places to put them.

I’d keep airfields. Like I would keep naval bases, dockyards, the GPSS, POL installations, bases with rail access, RAF ststiobs with comprehensive SSA, underground installations, all stuff with strategic or defensive importance that if needed again have not just been chucked. Would take billions to reestablish. I think, hope that the Mod share this thinking as look how many RAF stations become army barracks. The infrastructure is there. If bases need to go I would close army barracks. Especially those with small numbers of units. Again Mod already appear to be going down this route with the last round of… Read more »

When will they publish the shows and dates? Jones Beach (Long Island) is closest show to me but being a beach there’s no static display. Wish they’d demonstrate a Typhoon too

My attic – in June/July it’s like a tandoori oven

With a Prawn Biryani. ?