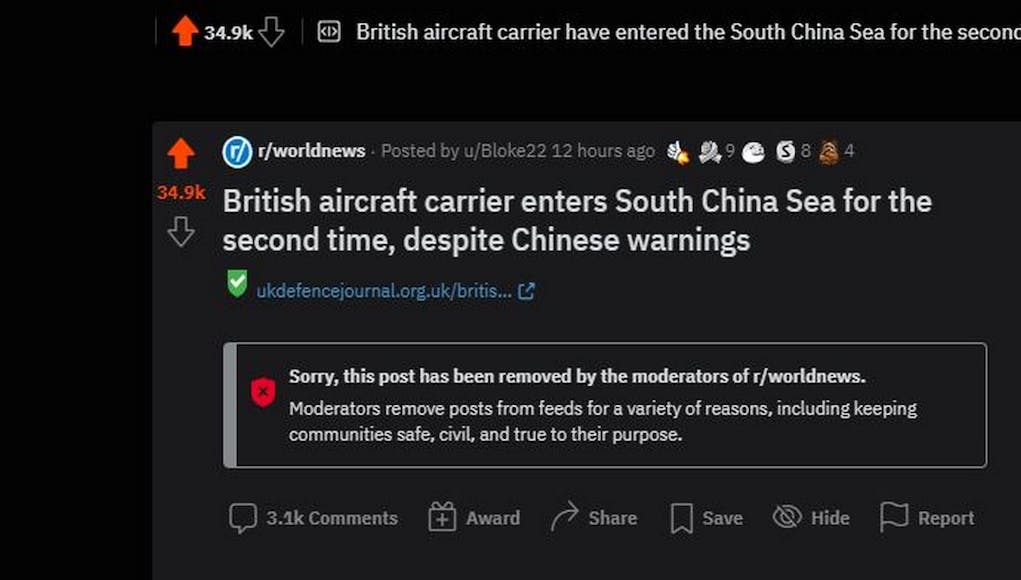 A post on a subreddit called r/worldnews was seemingly removed for presenting information regarding a British aircraft carrier standing up to China.

The post had reached the ‘frontpage’ of reddit, attracting tens of thousands of upvotes and thousands of comments.

The post was removed half a day after it was posted.

Former moderators claim that r/worldnews has been "infiltrated by China's 10 million strong army of Internet propagandists" and that "most of the moderators now aim to glorify China and Russia and demonise the west". pic.twitter.com/8j8bQlYBeC

Why is /r/worldnews so biased? from AskReddit

“r/worldnews has been infiltrated by China’s 10 million strong army of Internet propagandists. Most of the moderators now aim to glorify China and Russia and demonise the west. I was a moderator on r/worldnews but I was removed as a moderator by /u/green_flash for criticising the Chinese government and banning Chinese shills who savagely abused China critics.”

So, what’s going on?

Aircraft carrier HMS Queen Elizabeth and her Carrier Strike Group have entered the South China Sea for the second time, despite Chinese warnings.

This is the second time the British carrier strike group has entered the disputed region, you can read more here.

10 million Internet propagandists, far exceeding the number of military, active and reserve. Is that like a youth opportnuities training scheme, or more like conscription?

Moderation is only as good and balanced as the moderators or the mechanism undertaking the moderation. In my view it should be used sparingly and there are arguments for not using it at all. That said are all publications in some way biased?.

Supportive Bloke
Reply to  Mark B

There where 4 carriers operating together the other day. Great Photex

Under Mao the Chinese killed/starved up to 70 million of their people as well as sponsoring Pol Pot to kill 20% of the Khmer population. One is instantly stifled if one mentions Tien An Mien Square democratic demonstrations. Quite rightly we abhor the Nazi regime in Germany but why are the same standards not applied to the far worse Communist regime in China – well of course we have enough Marxists in the West who block their ears to any criticism of their own sides crimes.

I don’t think there are many Marxists who’d recognise China’s late capitalism as Marx inspired.
Personally I find more similarity between China and Nazi Germany.

“A rational stirpiculture in the wide social interest might, however, require a repression of the spread of degenerate or unprogressive races” So basically anyone who doesn’t tow the line should not be allowed to exist.

Yes China is changing again, I’m not going to claim to know what it’s changing into.
Actually I believe that quote is Hobson.

Yes, Hobson. I look at it this way, politics is circular start at the 12 o’clock position and go right or left the extremist will meet at 6 o’clock 🙂

Indeed. It will be interesting to see what the result of re centralisation of the Chinese economy that is rightly mentioned above if it continues results in. Will such a return still work now that economy has such momentum or will suppressing much of the economic freedom that generated that immense momentum eventually disable it. The leadership is doing it as much as anything ideological inspired to protect itself in reality as other factions are seen as a threat so that will be interesting as it plays out too if no doubt equally scary.

Indeed I have made the same reference a fair few times. It may still call itself the Communist Party but in all but name the Country is run on classic Fascist economic and political lines. How easy communists can slip into Fascists is ably demonstrated by Putin a man who served the Communist Party in the KGB is now perfectly happy to spend his down time riding his Harleys with the openly fascist biker gangs. Let’s be honest when you run a country openly Socialist and Nationalist being a National Socialist must come quite easily to you with your population… Read more »

Bringer of Facts
Reply to  Steve

Sounds like all the Marxists have left China and come west, to propagate identity politics and victimhood culture.

The simple answer is money, cash if you prefer. China has huge clout because its online presence is so large in terms of users. Western companies have ‘freely co-operated’ with the C.C.P. for many years so they can make vast sums through advertising. More than decade ago one western satellite broadcaster carried an English Premiership game between what were at that time the fifth and eighth placed clubs. The mainly Chinese audience was estimated at 350 million by the Financial Times. Just think what advertisers for jeans, fizzy drinks, etc., etc. could be charged for reaching that size of an… Read more »

To be honest I find the BBC with it’s leftist agenda and forced subscription worse than any Chinese propoganda. The TV license in the UK needs to go. Why should UK citizens be forced to pay for that utter eltitist crap that is forced down everybodies throat 24 hours a day. I don’t think the BBC are even allowed to mention the armed forces in a positive light for fear of upsetting the dogooders, I don’t recall ever hearing the taskforce mentioned. The world will always be too small for communists and western style democracies to co exist. Both are… Read more »

It’s precisely this illogical attitude that allows China to exploit us. Do you really find the BBC worse than the Global Times for example with its reminders to anyone that dares criticise the motherland that they are within ballistic missile range. Not sure I have heard that from George Alagiah or Jane Hill as yet though I’m willing to see some evidence to the contrary.

Yes, but also that a more middle class China would want more freedoms and therefore change, but it has backfired and we realised it too late.

Glorify China and Russia and demonise the west. Got a couple of commentators who do that on this site at any opportunity. (F35)

Yes, the west has its 5th column, usually linked to the usual selection.

unfortunately there will be a lot more of this, the was a story recently where wikipedia has become infested with chinese shills to the point where its existence is threatened.

If it was removed it is back up now. I commented on it a few times and I can see the post and all comments.

Hope that means that mods who took it down are taken down themselves as, it appears to be, a purely factual post.

Strange that mods can be taken down by other mods, must be some central committee of mods in play I presume.

By sheer chance, I glanced at reddit last night and saw that post. I was pleasantly surprised to see that every single comment I read was on the side of the RN. Quite honestly, given my past experience of reddit, I was expecting howls of “colonialism” and “can afford weapons but not nurses”. If the moderators have indeed been infiltrated, then I’m not surprised the post was pulled given the overwhelmingly pro-Freedom of Navigation sentiment.

Went in to r/worldnews for the first time from the link above, the first thing I saw was a post saying they are looking for new moderators? No idea if it is linked.