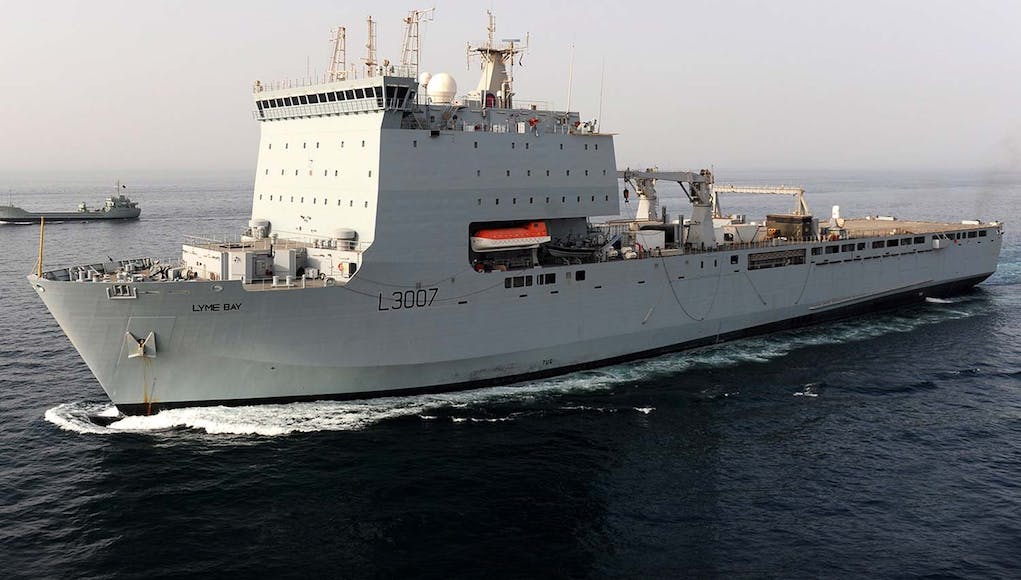 After completing a refit, RFA Lyme Bay is now back in the fleet.

Since leaving her home of Falmouth, Lyme Bay has been based in the equally familiar ports of Portland and Devonport on the South Coast, conducting safety and readiness checks for aviation, machinery breakdown drills, damage control, fire-fighting and administrative checks and the like, say the Royal Navy in a release.

“Ahead of impending Operational Sea Training (OST) – and in-order to prove aviation capability – the amphibious support ship embarked an 815 NAS Wildcat helicopter, based at RNAS Yeovilton, for the day.”

“Following our drydocking and refit in 2017, together with the hard work and preparations by the ship’s company, Lyme Bay is ready for OST,” said Commanding Officer Captain Jed MacAnley RFA.

“On successful completion, we will resume our duties delivering global maritime operational support to the Royal Navy – and our coalition partners – wherever and whenever required.”

Having completed regeneration, Lyme Bay’s enhanced capabilities will be tested for the first time during a demanding four weeks of OST, due to complete at the end of March. This will be closely followed by forthcoming Exercise Joint Warrior 18 off the west coast of Scotland in April according to the Royal Navy.

Good, we need every ship we can get into active service.

For transporting illegal immigrants into Europe.

marc – As long as they stay there I couldn’t care less….Mrs Merkel loves them.

Something needs done about the legal ones too. Britain was 20% non white back in 2011 from the census, they have been letting more in non stop since then, add illegals and our European country is already around 25% non white, and still letting more in. A few and no one would have been bothered, but it has went way beyond that by now. What are we going to do, deliberately make our own race outnumbered in our own country? We cannot go along with this any longer, start saying so openly. Can anyone imagine the Chinese making China 25%… Read more »

Does it matter? The UK has pretty close to full employment and it has been proven that immigrants on average pay more in tax than they take in benefits. Time to stop all this rubbish unfounded racism around immigration.

Best get making some white babies then:-)

Agree with Stephen. G This is PC in action and failed multiculturalism with free speech about whether the nation want that becoming a crime. Bit like never having a say for 40 years on what the Common Market has become with the EU. Remember that? We had a vote and they are trying to sabotage it as I speak. Steve, with respect you may be right concerning tax vs benefit. What you ignore is an ageing indigenous population with net immigration adding to that 300,000 to 500,000 a year. X that by 10 and see what state public services are… Read more »

Also, what is that vessel beyond her?

Any idea about the details of the refit?

Is she missing her Phallanx?

It’s so sad that we sold the 4th Bay to Australia. I was reading in Gabrielle’s blog a few minutes ago that apparently it was done to save £12m a year. £12m out of our supposedly over £40bn a year defence budget seems to me a disproportionate loss of capability vs the savings realised.

Makes you want to weep.

In fairness if we ever needed it again I’m sure Australia would make it available again for the same price it was sold for. If we don’t even have the crew to man it, at least the Australians are getting good use out of it.

That’s true. If the choice really was letting her rust because of no crew or giving her a good home where regular maintenance would be kept up then we did the right thing.

This lack of personnel really is a very core issue that needs to be addressed and to address it HMG needs to realise that terms and conditions of employment need to improve. It’s not going to get better by itself.

Phalanx I see in top photo? Fit them as standard!

One on the Heli deck?
Nothing in front of the bridge, looks a bit odd?

According to Wikipedia they also have 2 x DS30 30mm cannon. A pair of Phalanx (I assume the Bay in that picture has a matching Phalanx on the starboard side) plus a pair of 30mm and some miniguns and GPMGs (4 MGs and 6 GPMGs for a Bay, again according to Wikipedia) seems to be a pretty standard defensive armament for our RFA vessels. From my very brief research that actually seems pretty OK compared to how other countries arm their supply vessels. I was having a discussion with someone in the comments section of another article about moving Phalanx… Read more »

Might be. I have one of those touch screen PC’s where you can expand an image on screen and I think I see the barrel facing forward.

Yes I remember your comment re the Phalanx store. Curious how many MoD actually have.

Looking at some of the high resolution pictures of Cardigan Bay one of the 30mm is as you describe on Lyme, the 2nd one is in the same position on the other side.

Some of the Phalanx in Guz where land based in Afgan and Iraq. Mounted on trucks they where used to shoot down incoming rockets and mortars. They where maintained by RN Engineers with assistance from the Army who provided ammo loading teams. RN PO and CPO tiffs and Squaddie NCOs do not make a good mix…the army are just so serious and well…”regimented” in their routines. Anyway they did a good job out there but now they are back. Most Phalanx ships are FTR(Fit To Receive.). The base is there. The Cooling water connection and the wiring is in place.… Read more »

30s are aft on the bridge wings.
Not really plug and play either. Again you bolt them on , wire them up and do the set to work. It takes a couple of weeks

Thanks for both explanations Gunbuster.

Thanks from me too.

I’d Love to see a plug and play VLS we could add to OPVs and the RFA, surely there is room on Lyme bay for a little sea ceptor coverage.

Plug and play VLS would mean having a rather large hole in the deck Andy, you’re better off with something like a RAM mount. As for actually fitting missiles to RFA ships and OPVs, its a nice idea, and in wartime it would definitely help the RFA ships, but its an exercise in futility. An OPV is at most only going to fight pirate boats, with the small chance of a heavy machine gun or RPG, it doesn’t need anything more than a cannon mount, miniguns, and a radar for locating small surface contacts over large distances (I still don’t… Read more »

Just a thought, how about and extra Bay class and fewer river classes? Not really comparible I know but in terms of flexibility and capability?

The issue with that is that we don’t really need another Bay class as much as we need more ships, even OPVs. Between the 2 Albions and 3 Bays (and a QEC operating as an assault ship), we’ve got enough capability to land about as large of a marine force as we can still muster. Meanwhile, we’ve got a huge volume of water to patrol, and at the very least OPVs free frigates and destroyers up from tasks they’re not needed for. Sadly, I don’t think a Bay would be much use trying to chase smugglers or pirates.

Misread that as ‘Largs Bay’ – was thinking we had bought it back.

The Bay class are fantastic vessels, so it’s good to see Lyme Bay going through refit and rejoining the fleet.

Don’t get all excited everyone. One of the others will be off into refit soon enough. It’s not like we fund enough crew for all three.

And on the Phalanx units, how many short are we and how much does it cost to keep moving around the ones we have? Would it be better to not share important kit and actually have enough of it to go around?

Better: yes. Possible with current budget: no. Honestly though, its bad, but not awful. I mean, its not like Dauntless is using her Phalanx mounts or Aster missiles, so why not put them on operational ships? The MoD needs to be smart with the money they’ve got, if ships are stuck in port and not going to sail for a long time, pinch pennies and keep the rest of the fleet operational by looting them.

It would be interesting to know how many phalanx units the navy actually owns. If i read correctly, the one that was used by the ground forces to protect the british base was pulled off a ship, meaning that there clearly isn’t any spares, but is there enough to cover the full navy in the time of conflict.

Even in a time of conflict, the entire navy couldn’t sail. The manpower doesn’t exist to get even the ships that aren’t in refit deployed simultaneously

Harpoon gains reprieve as decision to retire the Anti-Ship missile is...