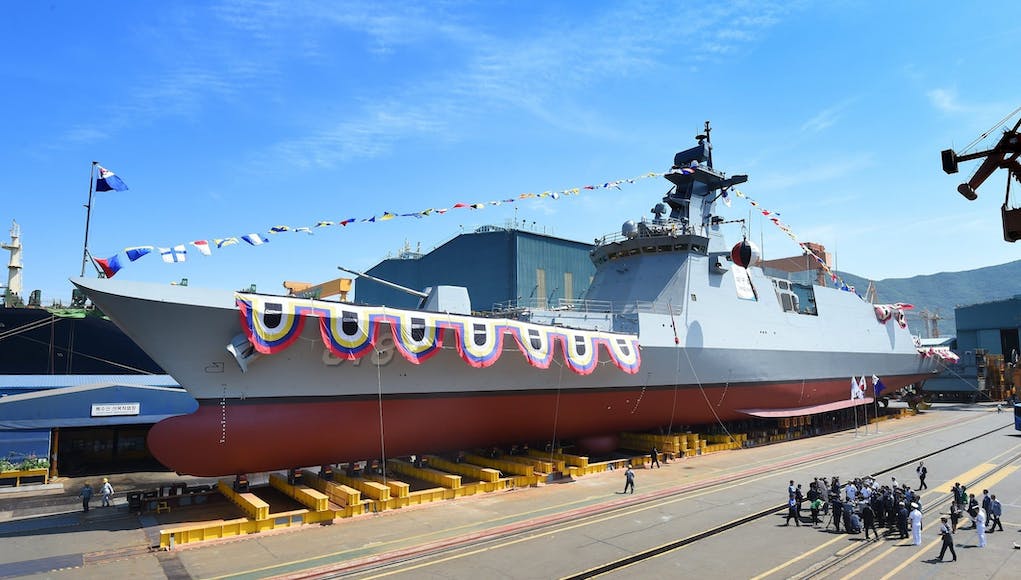 Rolls-Royce has won a contract to supply MT30 marine gas turbines to power the next three ships in the Republic of Korea Navy’s Daegu-class frigate programme.

Eight Daegu-class frigates are scheduled to be built. The first ship being built by Daewoo Shipbuilding and Marine Engineering (DSME) was launched at DSME’s Okpo shipyard in June 2016. Ship 2 will also be built by DSME and Ships 3 and 4 by Hyundai Heavy Industries (HHI) SNSD. The MT30 gas turbines for Ships 2 and 3 are due to be delivered in the second half of 2018 and for Ship 4 very early in 2019.

“Our continued supply to this programme validates our on-going relationship with DSME and HHI. The Daegu class is an exciting programme. It is the world’s first frigate to use a single MT30 in the compact package and our first application for MT30 outside the UK and US markets.

The MT30 gas turbine has been successfully installed in Ship 1 and is currently successfully supporting the commissioning of ROK Daegu’s propulsion system. We understand that MT30 has powered the ship to meet its full speed requirement.”

“The MT30 is derived from Rolls-Royce Trent aero engine technology and builds on over 45 million hours of operating experience and ultra-high reliability. It is initially built as separate modules on the same build line as the Rolls-Royce Trent aerospace engines in Derby. It is then assembled and tested at the company’s Bristol facility.

With testing complete, the MT30 engine is shipped to Korea, where Hyundai Heavy Industries (HHI) Engine & Machinery Division integrate it into the steel enclosure which also houses the air inlets, exhausts and ancillary equipment, prior to installation in the ship.

The MT30 gas turbine is the world’s most powerful in-service marine gas turbine with the highest power density and will deliver a high power output in a compact space.

Rolls-Royce MT30s are in service with the US Navy’s Freedom class Littoral Combat Ship and already successfully powering the Zumwalt class. MT30 has been selected for the Royal Navy’s Type 26 Global Combat Ship and is powering the Royal Navy’s new Aircraft Carriers. On HMS Queen Elizabeth the two MT30 gas turbine alternators have now been released to full power. MT30 has been recently selected for the Italian Navy’s new Landing Helicopter Dock.”

The frigates are intended for a variety of missions including anti-submarine warfare, anti-air warfare, patrol, surveillance, search and rescue, protection of EEZ, and transport.

The MT30s really are cleaning up here., they seem to be getting everywhere and success like this tends to snowball as they get seen more and more as the safest and best-supported choice. Well done Rolls-Royce, the MT30 is a real UK success story.

Hopefully will reduce price down for type 26 programme a little. Obviously the more MT30s exported abroad the better for UK industry and reduction in price per unit?

Just as an aside we normally read in the media so much about foreign companies buying up British ones but its good to see Rolls Royce purchased MTU engines in Germany and Bergen in Norway some while back. They supply very large diesel engines for maritime, defence, off road and mining applications and smaller engines are fitted for rail applications. When I say ‘smaller’ it is relative. They are still big!

40,000 jobs at risk due to Government shipbuilding plan warns union