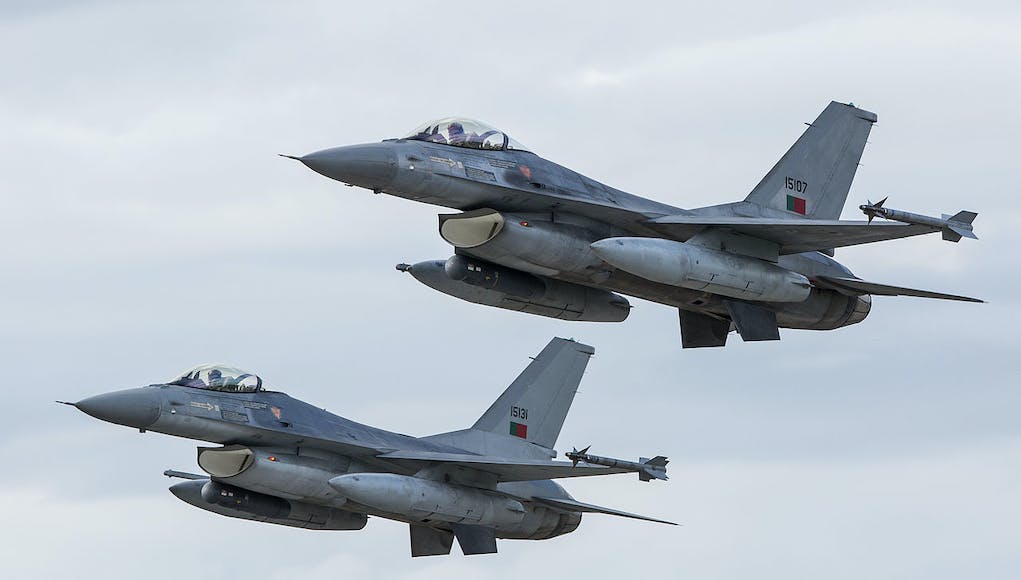 Under a draft law passed on November the 28th, the Romanian government outlined the procurement, noting that the additional aircraft will have the same M.5.2R configuration as the Romanian Air Force’s existing inventory of 12 F-16s also sourced from Portugal. Eventually all 17 fighters will be upgraded to a new standard called M.6.X.

According to local media, the draft law must still be approved by the Romanian Parliament, though due to the limited scope of the procurement, it should not be an issue.

Romania procured its first batch of 12 F-16s from Portugal under a government-to-government deal inked on October the 11th, 2013. These consisted of nine single-seat A-standard units acquired by Portugal from the U.S. in 1999 under the Peace Atlantis II program, as well as three two-seat B-standard fighters purchased by Portugal in used condition from the U.S. through its Excess Defense Articles (EDA) program for resale.

The 12 fighters underwent revamps and upgrading to the AM/BM standard by Lockheed Martin prior to delivery, which began on September the 27th, 2016, with the handover of the first six units. This was followed by the delivery of three more on December the 13th, 2016; the final three units arrived in October 2017.

In March 2019 the entire 12-unit fleet was declared to have reached Initial Operational Capability by Defense Minister Gabriel Les at the 86th Air Force Base in Borcea.

This story just makes the people complaining about the new UK carriers look a bit daft.
Here we have a country that are happy with a fleet of 17 F-16’s and we have people moaning that the carriers will only sail with 12 F-35’s in peacetime configuration.

I think this also shows that aircraft can and are being used way beyond manufacturers stated lifetime for the air-frame(sp?). I wonder how long the Eurofighter can be in service for if well maintained?

I see where you’re coming from but, Romania are in my opinion one of the many eastern NATO members that know that even if they had 170 F-16’s they’d be flattened by Russia in an afternoon. So they maintain a token force and fully expect the UK and mainly the US to use their forces to save the day. And possibly more to the point, Romania tend not to poking about in the Middle East, East China Sea or have any islands in the South Atlantic they might need to defend.

Wrong Phil C. Incoherent nonsense. Romania has deployed its troops on a number of occasions since the end of the Cold War in support of her NATO allies. During the NATO bombing of Yugoslavia in 1999, Romania placed its territory and airspace at disposal for NATO troop and even sent troops to the Kosovo Force contingent in the summer of 1999. Romania has taken part in the War in Afghanistan since July 2002, with its commitment rising to more than 1,500 troops in 2009. Their armed forces also took part in the War in Iraq from 2003 to August 2009,… Read more »

Romania should still buy a few more and build up a bigger millitary and not rely on other nations so much.

the refits done to the two type 22’s they bought from the u.k have it has been claimed to have greatly improved the life expectancies of them both

I’m not so sure.
The F-16 is still an impressive bit of kit and upgrading the radar and weapons could still see it do a job. Yeah, it may need help and not be a first response asset but as a weapons truck it’s still agile and fast and a squadron of F-16’s is always going to be a welcome bonus asset.

depends on the weather, and standard of storage and maintenance

I’m sure Nigel will be all over this (that is not meant in a derogatory way) but it seems to be that a combined order of Gripens for NATO countries needing to update their fleets would be hugely beneficial to the alliance. A modern aircraft procured in numbers is just what they need even if it would require some others to help fund it. Alas such joined up thinking seems to be severely lacking.

I suspect the f16 is at give away price and coming from excess NATO stocks, doesn’t its procurement represent joined up thinking? Perhaps Romania will continue to secure a steady trickle of used but updated examples as european fleets are upgraded

the u.s at AMARG has over 300 f 16’s in reserve and being maintained in a condition to be available for future reactivation

To be fair to the Romanians, aside from the millions of Euros pumped into the country (most of which seemingly ill-used) they are still pretty skint, but at least maybe starting to wake up to the Russian threat right across the Black Sea! They made an effort with their older Lancer upgrades in the late 90s, and the heli fleet, so let’s give them a slap on the back and say well done, but more effort needed! Then, possibly we can address their neighbour Bulgaria, and see what they can sort out wirh that scrapyard they call a military!

Bulgaria has changed dramatically for the better in the last 12 years that I have been visiting and is now among the countries that are within the NATO 2%. I believe this last year they also purchased second hand F16s. I appreciate that the amounts are small but going from the old planned economy to a market system has hit them hard and corruption was deep rooted under the old system – it takes time. Its pretty hard to justify new Typhoons when pensioners have to live on less than £200/month.

Romania always gets lots of millitary gear for cheap! Fair play I suppose. Wonder how much the type 22 cost them.

Cam they were ripped off massively with the type 22s, so much so it became a bit of a political issue, in regard to possible, or should I say routine, corruption, back handers and bribes!

the sale of the two t22’s to romania was the issue of a major fraud squad investigation after £6 MILLION WENT TO AN UNIDENTIFIED ‘FIXER’THE ACTUAL SHIPS COST UNDER 50 MILLION EACH.

I guess at the end of the day its down to lack of Budget.

AND A SMALLER ECONOMY

I believe the Portuguese are receiving replacement F16’s from US stocks.

There’s obviously a reason why the Romanians are receiving US aid via Portugal, some political slight of hand ….

portugals surplus stocks?!! the only thing we have in surplus are admirals and brigadiers

They have been culled already and all whom remain have a job to do. It takes a vast background organisation to put assets and people in the field.

an architect mate of mine(not naval) did a calculation on what the removal of the ski ramp would the Q.E in terms of deck space he worked it out at over 40 yards of take off and recovery space i’ wonder if that would make an emals system more attractive i see an emals system has been tested using a grippen which took off without a problem. shame there wasn’t not a folding wind version on the f 35, the Q.E fighter capacity could be greatly increased

With the size and capability to operate 36 jets plus helos, the QE class don’t need to be concerned with wing folding Andy.

Agree, if, which I doubt, the QEs ever fo go CATS and traps they will still only embark 50 aircraft possibly a bit more in all out war surge.

From what I’ve heard the US Navy has had nothing but problems with their EMALS. Glad we didn’t go for it.

Ski ramp works 100% of the time, costs barely anything to maintain and needs little to no maintenance as it’s just a ramp. We would only need CATOBAR or EMALS with F35c, and that ship has sailed.

If the F35b’s range becomes an issue we could just do what the Israelis have done with their A models and fit CFTs to them.