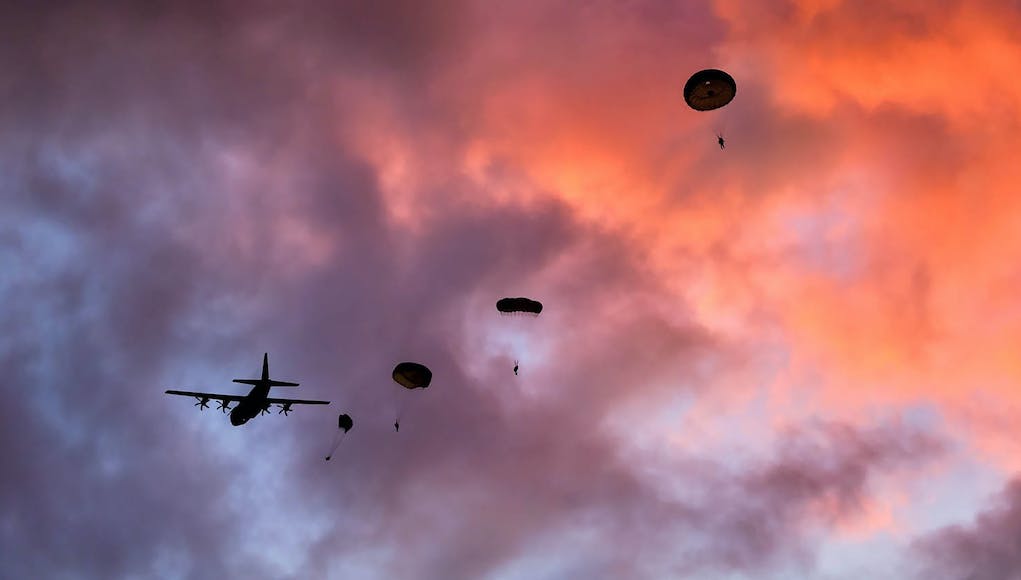 Royal Marines performed a parachute drop over Denmark as part of the Baltic Protector deployment.

The Pre-Landing Force, 30 Commando, landed outside the small town of Varde in western Jutland.

After a 90-minute flight in a C-130 Hercules from RAF Brize Norton, the Plymouth-based commandos jumped over their dropzone using special low-level parachutes, landing on their target with pinpoint accuracy at twilight, say the Ministry of Defence.

“The drop is just one element in the opening stages of the two-month-long Baltic Protector deployment, led by Britain and involving more than half a dozen nations which border either the Baltic or North Seas.

The force was established seven years ago to demonstrate the resolve of the military of northern European nations to operate side-by-side in the event of an international incident or crisis – everything from responding to a natural disaster through to conflict.

Interesting article I did not know the marines had a parachute trained unit.I thought the paras were the only ones that had pathfinders that jumped out of aircraft. Everyday is a School day it seems ??

While not strictly RM, 148 Meiktila Battery, the NGS element of 29 RA, which supports 3 Commando, is also Para trained.

And of course the SBS.

The SPAG is another fascinating Para trained outfit on the RN side of things.

The SPAG are a very specialised unit, which is one of the many capabilities which we have, and most others do not. Not a job I would like to be fair.

Jumping straight into the water, possibly at night, with rescue kit.

Instructors from the RN Submarine School I believe?

Do you know how many ranks? Cannot be many I guess?

Average of 30, give or take a gapped position or two. They all have a set of RN wings, and can use LLP or basic steerable static line squares, or 22 foot steerables. It’s not all about jumping though, as they will form a liferaft/surface team once contact with the stricken sub is made, and set up the rescue, either assist the self rescue as the crew exit, or set up their own. They are on 6 hours NTM, and while I don’t know that much about them I know they do have female members and that has caused a… Read more »

Thank you Airborne. My Respect.

Quite a high percentage of Royals have a set of wings on their arms mate.