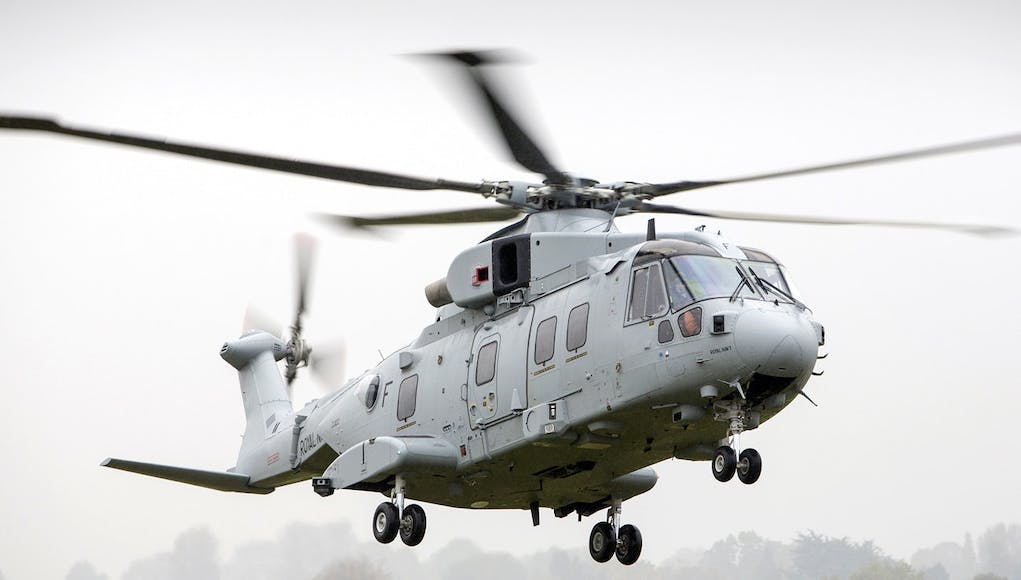 The Merlin Mk4 helicopter is better adapted to operations at sea than the Mk3 it is replacing and will be the mainstay of Commando Helicopter Force for the next decade and beyond.

The first Mk4 took to the skies over Somerset earlier this week.

According to a press release, the differences are significant:

“Well, for a start it’s maritime grey not battlefield green (although it’s easily distinguishable from its submarine-hunting Mk2 sisters by the lack of a sonar dome under the cockpit).

Less obvious to the eye is a folding main rotor head and folding tail which make it much more suited to operating from RN carriers and assault ships at sea.

In addition, inside the crew of four have access to a vastly-improved avionics suite.”

The first Mk4 is likely to be ready for front-line operations by late 2017, with the entire fleet of 25 converted by the end of 2020.

“What a fantastic achievement for Leonardo, the Merlin project team and all those involved at Commando Helicopter Force.

This is truly a leap forward in CHF’s capability to support 3 Commando Brigade at the speed and range required on the modern battlefield, whether operating embarked in Royal Navy warships or on land.”

“lack of a sonar dome under the cockpit” Radar dome surely ?

No. The Mk2 is anti-submarine so it has a sonar dome.

Not surley because sonar is for detecting below the water and radar is for above water.

I love this. “New” These helicopters were nicked from the RAF to replace the Sea King Commando’s of 845,846, and 848 NAS. They are not “new” Robbing Peter to pay Paul. Thanks I believe to the 3 billion cut in the helicopter budget that genius Gordon Brown made around 2007 timeframe. The RAF has been compensated by 14 additional Chinooks ( down from 22 promised ) but it still means as usual a cut in overall numbers. Even worse, the additional Chinooks that were never ordered were supposedly paid for by scrapping 2 squadrons of Harrier GR9’s and the RAF… Read more »