Ahead of Exercise Cold Response – the UK’s largest Arctic deployment in nearly a decade – Green Berets of 45 Commando and 47 Commando have combined to raid along the frozen Norwegian coastline, say the MoD.

According to a news release here, this is all in preparation for further raids inland as part of the Norwegian-led Cold Response 2020, which will see around 15,000 troops from ten nations test themselves on the seas and along the demanding Arctic shoreline.

“These latest missions saw commandos take on well-defended coastal locations, used by the ‘enemy’ to control vital supply lines into the Nordic country. The key for the raids, which are being conducted during the day and under the cover of darkness, was keeping the element of surprise before destroying infrastructure in a coordinated attack.

The small, fast raiding craft of Plymouth-based 47 Commando took a force of marines ashore using Offshore and Inshore Raiding Craft, while others moved into position on skidoos before the assault on the enemy stronghold.”

“Amphibious raids are the commando forces’ bread and butter. As the UK’s elite amphibious troops, we’re one of the few nations in the world that has a genuine ship-to-shore capability. Although conducting these sorts of missions may be second nature to some of our people, that’s no reason to rest on our laurels; regular training in difficult conditions ensures that we remain at the top of our game. This is even more important in the Arctic where the consequences of a mistake can be even more serious and the meaning of the phrase ‘train hard fight easy’ becomes self-evident.”

More than a thousand Royal Marines have been in the region since January on Arctic training missions building up to Exercise Cold Response.

A new big fast amphib class is sorely needed to accompany and complement the carriers.

Agreed- was there not talk of Littoral Mission Ships under Gavin Williamson?

Yes, but not in a traditional LPD role with LCVP / LCU or like Ocean.

If they ever materialise, they will probably be primarily SF support platforms, carrying smaller craft and helicopters, and loitering long term off places like the Middle East.

I hope we get them as I can see their usefulness.

Morning Steve. Agree with you the RN needs 2 new ships to replace the LPD’s, with aviation facilities for lots of helicopters, and fast LC, LCAC to replace the LCVP’s. Concerning the LSS. Although you’re right with the T26 mission bay and big flight decks, my belief was ( may be wrong ) that the LSS would be permanently deployed in their region, a floating base in effect. The T26 and other assets who could also launch these sort of small raids will most likely be needed elsewhere, like the North Atlantic doing their ASW role, given the lack of… Read more »

I think the LSS was supposed to be operated like that SOCOM container ship? The thing is the US has the assets to support such a vessel being forward. T26 etc. wouldn’t be a substitute but they are being touted as ‘bases’ for special operations. But as you point out, and I quite agree, we will have to few off them. It was a dig at those who are obsessed with Chinook capable fligtdecks and the missions bays……..sorry…. Never sure about aviation facilities for LPD / LSD. They add complications to design beyond a flight deck. If this hypothetical LPD… Read more »

Don’t think it’s likely unless MOD told to get rid of an assault ship – why would you? Get impression GW is copping the blame for committing to stuff that was never in the forecast.

The US can have such assets because they have the depth and breadth to support such gloabally.

It depends on what you mean by big fast amphib? The USMC are recognizing the increasing risk to their Wasp/America class assault ships, Antonio class transport docks and dock landing ships when these ships are stopped in the water disembarking equipment and troops. Its a major loss of troops and equipment when there are so many eggs in one basket, if successfully targeted before disembarkation. I doubt the US are the only ones exercising their brains on this issues. While stealth and super/hypersonic missiles are increasing threats, the major risk is ballistic missiles. Ballistic missile have been largely paper tigers… Read more »

Going to post this again as it seems to have been deleted the first time. It depends on what you mean by big fast amphib? The USMC are recognizing the increasing risk to their Wasp/America class assault ships, Antonio class transport docks and dock landing ships when these ships are stopped in the water disembarking equipment and troops. Its a major loss of troops and equipment when there are so many eggs in one basket, if successfully targeted before disembarkation. I doubt the US are the only ones exercising their brains on this issues. While stealth and super/hypersonic missiles are… Read more » 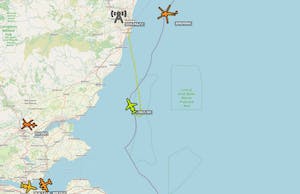