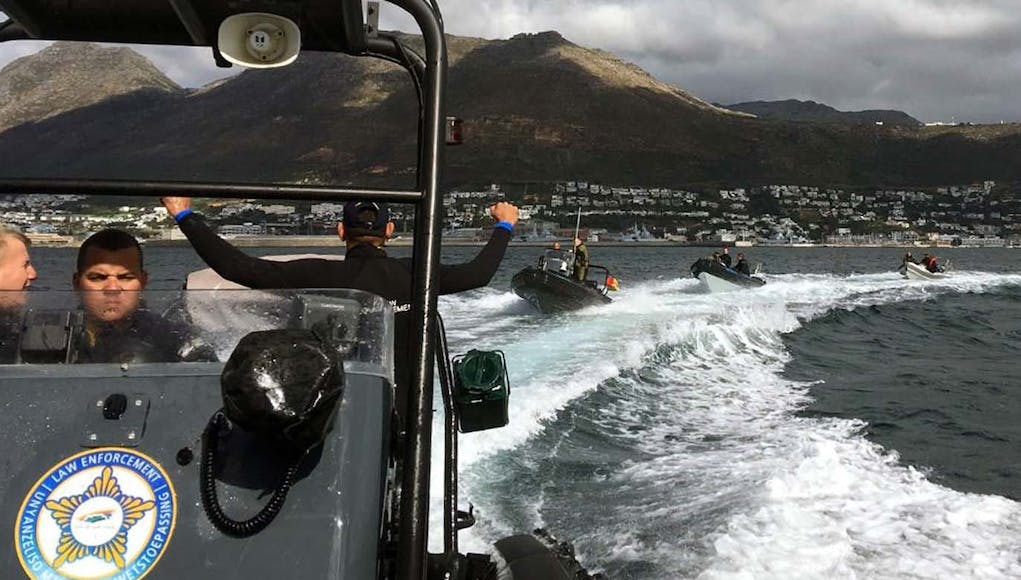 Royal Marines spent a fortnight in Africa teaching local law enforcers how to keep their waters secure, according to a release.

The Royal Navy say that a group of commandos from 1 Assault Group in Plymouth shared their expertise in boat work to provide maritime security training.

“In Cape Town, the team linked up with the local Law Enforcement Team to move from basic drills all the way up to using several boats to interdict criminals on the water by night and day.

They then flew 2,200 miles to Dar es Salaam, another of Africa’s great port cities, to deliver similar training to the Tanzanian Peoples’ Defence Force – whose waterborne police craft include some old British fast boats.”

“Conducting training in Tanzania was more challenging as there was a language barrier but we soon adapted using various methods of training and the students came on leaps and bounds,” said Marine Tim Lombard.

Hear Hear!! South Africa’s Navy is still one of the best in Africa and still modeled in many respects along the lines of the RN but along with other branches of the Military in SA has deteriorated in the last two decades due to budget cuts,corruption and lower standard levels since the dawn of democracy!

Indeed. South Africa bought some very capable kit with the big Zuma-era arms deal, e.g. the Meko-200 derived Valour class frigates and the Saab Gripens, albeit almost certainly at inflated prices due to all the backhanders that were allegedly flying around. Unfortunately I read various reports in the SA press that the serviceability on both the Valours and the Gripens is appalling but then again if countries such as Germany battle similar issues I guess they’re in good (“good” as in rich nation that should know better) company. I’ve seen both a Valour and 3 of the Gripens active in… Read more »

Hi Julian-Howsit! Went to Durban Bay during the Armed Forces Day two(?) years ago and saw an impressive display anchored in harbour-Fleet Replenishment ship a couple of strike craft, one frigate and a sub which we queued for two hours to board. Was in the company of an ex US Navy chief engineer who had served aboard a Nuclear attack submarine so it was a must do. Must say I was impressed all round although as you say low numbers in service and I believe one sub is unsalvageable due to a major electrical mishap. Apart from that the Navy… Read more »

Geoff – Pre the Nelson Mandela era South Africa had a very capable and innovative home grown Arms Industry,is it still the case or has it deteriorated since ?

Hi Paul. It has deteriorated but to be fair, the need for a home grown Arms Industry has largely fallen away. When South Africa was isolated from the rest of the world it became a matter of necessity to manufacture locally. SA and Israel co-operated closely in Defence matters, the latter being in a similar situation of isolation, albeit on a lesser scale. From that variations on the various Mirage airframes were developed. In addition strike craft from the Israeli navy and some world class Artillery and a range of military vehicles were developed.

…for example, although the Police Service could only be described as quasi-Military, one of our larger local SAPS stations manages to fly the National Flag and the Police Ensign upside down on a regular basis and has done so for years now!! They just don’t seem able to get Page 1. right, so you can guess how their effectiveness elsewhere mirrors the lack of attention to basics!