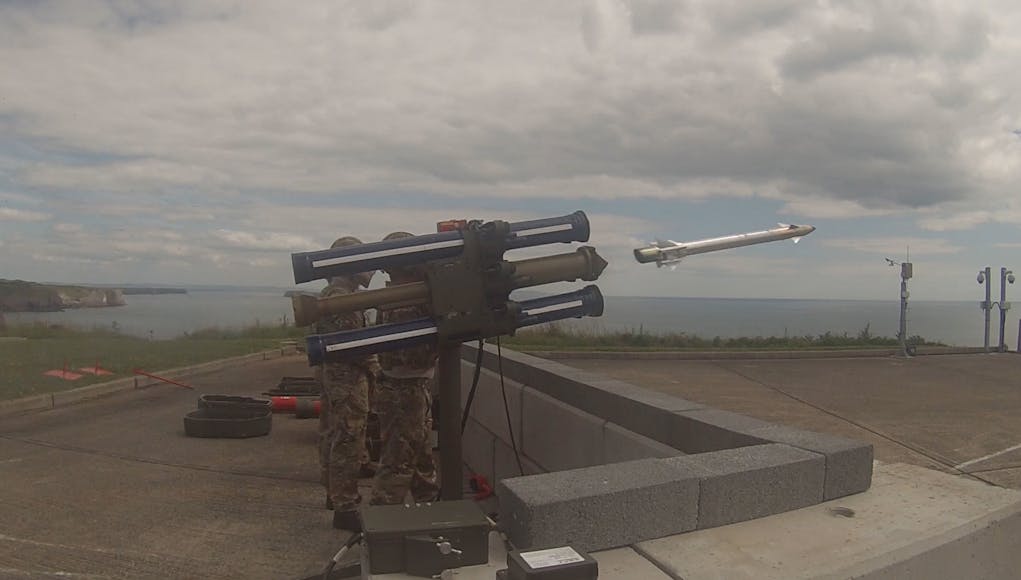 Royal Marines have tested the Lightweight Multirole Missile against a drone.

The missile is fired from a small shoulder launcher and the operator guides it using a joystick which controls a laser beam on which the projectile flies.

LMM was initially conceived as Thales’ response to the MoD’s Future Air-to-Surface Guided Weapon (Light) requirement. LMM has been designed to be launched from a variety of naval, air and land platforms against a wide range of targets.

“It gives us more utility across the battlefield and gives the brigade a different option.” Said Captain James O’Rourke, Officer Commanding of Air Defence Troop, in a news release.

“It means we can start enabling attacks on targets that won’t be able to see us. It’s got a laser beam system as well and it’s a passive system so we won’t be spotted by the enemy when we pull the trigger.”

The exercise took place at the Air Defence Range Manorbier in southwest Wales.

wouldnt bullets be far cheaper at short range for drone atacks…after thinking about it large millitary drones might need a missile after all.

It’s not a overly small missile, so my guess they are testing against survalliance targets which would be operating well beyond the range that a bullet could easily operate. Saying that I can’t imagine a laser guided missile is going to be overly accurate against a moving target, so assume it has to have a proximity fuse with a fragmentation charge to be effective, which adds size.

The LMM uses the same system architecture as Starstreak HVM which is a highly agile and accurate surface to air missile.
The dit above shows a picture of a prop powered Banshee target drone. The LMM is said to have a speed of around Mach 1.5, so have they tried it against anything faster? If it could target faster aircraft, this would the troops a much more useful weapon. Not only targeting fixed structures, moving vehicles, small boats, drones, but also ground attack aircraft.

I don’t have any real experience but having to keep a laser on moving target that is not moving on a constant trajectory (evading a missile for example) I can imagine will be less than easy. If I remember reading correctly the problem with the systems of the falkands was that the laser targeting just couldn’t track the jets accurately enough to shoot them down.

Yes the earlier system used beamriding, whereby the spot of the must be kept on the target and the missile tracks the reflection. Starstreak uses a different method. The target is mapped with a laser grid. The delta between the target and the missile is measure by the ground unit, with corrections sent over a data-link. This makes Starstreak able to track very highly manoeuvring targets.

I still don’t understand how it works. Does the laser beam cover a wide area and the missile then holmes in on the area the light is reflected? In my head I’m imagining the operator having to keep the laser fixed on the target which would be next to impossible if it was a narrow beam over a large distance. So that can’t be right.

Generally a beam rider involves shining several different beams towards the target that are slighlty offset. The missile sensor points backwards and tries to sit in the overlap of the beams riding it to the target.

The weapon operator keeps the target inside the field of view by panning the weapon and can fine track within that by moving the cross hairs within the sight to keep the point of laser overlap on the target. The sight will have different magnifications.

Some more modern systems have an auto tracker for the fine track but not sure about this one.

The Starstreak HVM uses a development of the SACLOS sighting system. This is semi-automatic command line of sight. The manual part is done by the operator keeping the target within a sight picture using cross hairs. The angular difference between the operators sight picture and the tail of the missile is triangulated and a command is sent to the missile’s control surfaces to intercept the target. As Dave says below, it then paints a grid over the target using two lasers. The light reflection is used to adjust the missile by comparing the aiming unit and the missiles path. The… Read more »

Thats what the HVM is for matey….. LMM to give ground target capabuility, HVM for surface to air targets ??. They have used the LMM against the uav to show it can be used is all.

Yes, but the Army is short on flak cannons; Martlet is what is available. IINM they cost something like half a million pounds, but it can reach up to hit MALE UAVs. Not all AA cannons can do that.

An airburst 40mm CTAS is best I say.

Bullets that miss(i.e. most of those fired) are going to hit something, so spraying even a short burst on an airport is very dangerous with high collateral casualty probability. I assume that’s why Manpad guided misslies here are being tested.

Sounds to me like this might in part be a response to a future need to take out helicopter gunships in a peer conflict? Shoulder launched, passive seeking, or remotely controlled (meaning something slow moving target and within visual), target likely to have countermeasures that include direction-finding hence the “hidden” launch features. Sounds like a Stinger for modern warfare (at least in part).

The LMM with the RM is not new though.

30 Commando has incorporated the RM Air Defence Troop for years.

I didn’t realise it had been around that long- I assumed from the article that it was part of testing of a new(ish) rather than existing inventory item. Thanks.
I guess that doesn’t entirely change the premise though- it’d potentially be pretty effective for taking down Hind gunships in Lithuania in some kind of hypothetical war in eastern Europe.

The 7 Air Defence Regiments in the British Army are now down to 3, one being reserve. Last one to be cut was re equipped with UAV. UAV which themselves are now due for the chop, though there are rumours of a rethink.

Air Defence Troop can defend 3 Cdo Brigade HQ ( of which 30 CXG forms a major part ) as a critical point, but how can it defend the whole Brigade?

Even more so if I understand the (rather vague) intentions for our strike brigades; small motorised units dispersed over a couple of thousand square kms makes for a lot of units vulnerable to attack helos and the like…

The UK military already have Starstreak HVM for dealing with attack helicopters. That will remain the principal anti-air solution. LMM/Martlet is simply an updated Starburst missile (which was an updated Javelin.. which was an updated Blowpipe…) compatible with the newer control units and with a newer rocket motor and multi-purpose warhead and fusing. Starburst was replaced in the anti-air role by Starstreak HVM. The reason for LMM/Martlet is that its a relatively straightforward way of getting a smaller guided munition aboard Wildcat helicopters, without fitting Brimstone (which is politically tricky, people might question why we need Apache then…). Otherwise Wildcat… Read more »

Lot of info there Rudeboy, thanks for that! So, if I’m understanding you correctly and from wider reading, LMM/Martlet (I didn’t connect the two as being the same in my head until now) is both an anti air and anti surface (particularly maritime) small missile, good for aircraft, UAVs and smaller surface vessels. Starstreak (on which it is based) is our primary land-based light air defence system, with Land Ceptor as the “bigger brother”? It would make a huge amount of sense to make the LMM cross compatible to as many platforms as possible, particularly if Apaches are going to… Read more »

The problem with the guided rockets is that they are not very manoeuvrable after being fired. The CVR7 has proven that it can hit moving vehicles, but they are significantly slower than say a drone or a helicopter. So the CVR7/Martlett do complement each other.

Yes thats correct. Starstreak is certainly better for pop-up targets or fast movers though (can also be used against light armoured vehicles as well). APKWS and CRV-7PG are cheaper, they occupy a slightly different niche though. APKWS is the most elegant engineering solution, not sure if a model has been made for the CRV-7 rocket though. They re-use existing rocket pods and in the case of APKWS reuse the full rocket including warhead and rocket motor. The warhead is bigger and the kinetic energy is greater, so for some targets (e.g. buildings and armoured vehicles) it would be better, more… Read more »

Great news! The drone threat is ever increasing and LMM is a very useful weapon for dealing with the problem. Has a proximity fused warhead, decent range and is cheap.

HVM is a “hitile” with three projectiles which may miss a smaller drone completely. HVM with it’s mach 4 speed is great for pop up attack helicopters.

Is this a replacement for Starstreak HVM or an upgrade?

No, its primarily designed for ground targets such a unarmoured to medium armoured vehicles and fast attack craft. The trial was to prove that it could expand its capabilities and attack slower moving aircraft such as drones and helicopters. For example the Banshee propeller powered drone that was used as the target can travel over 200mph. Which is firmly encompasses the helicopters speed range.

Obviously not the Shoulder Launched version mentioned in the Initial Thread.

The F-35 will cost significantly less than you think