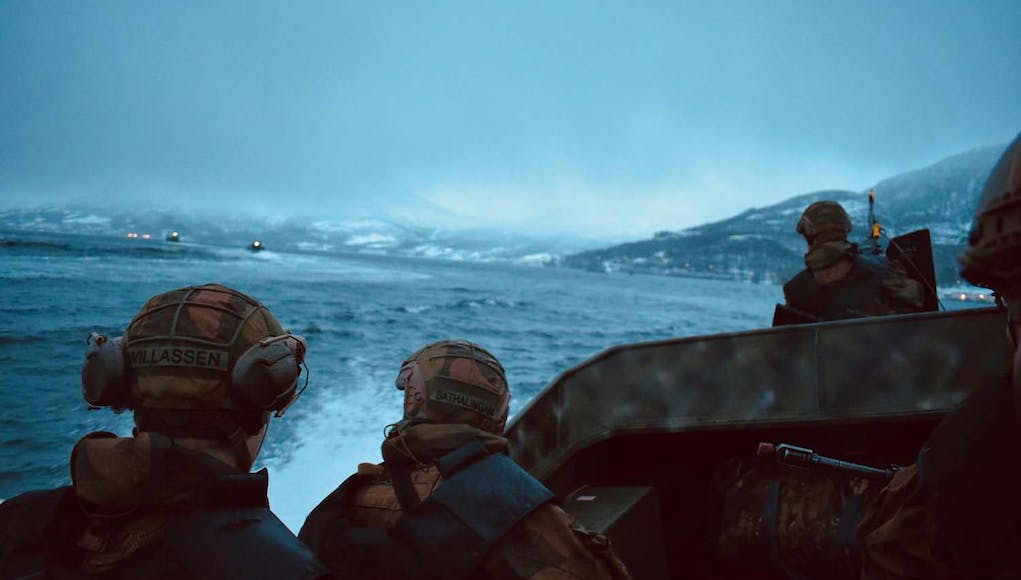 Commandos from 1 Assault Group are working with the Norwegians while based at Gratangen Fjord, say the Royal Navy.

According to the Royal Navy, Royal Marines have been strengthening their connections with NATO ally Norway.

“It started recently with joint beach reconnaissance exercises, with the Norwegian divers surveying under water while Royal Marines scouted the area for ‘enemy’ activity.

Once the beach was secured, the commandos from 539 Assault Squadron used their Landing Craft Vehicle Personnel – the largest of 1AGRM’s craft in the Arctic – to disembark Norwegian equipment and vehicles. The green berets are living and working with the Norwegians at the dock area in Hellarbogen, at the side of Gratangen Fjord, and will be ramping up their work with them in the coming weeks, ensuring they are as closely aligned as possible.”

“We have been in the early phases of working with the Norwegians, making sure we can communicate effectively with each other and that our kit is compatible,” said Captain Sam Moreton.

Great, Norway are great partners and have always helped the UK, going back to WW2 when British commandos parachuted in to supply and help them assault ze germans. And we have learned allot from the Norwegians in arctic operations and we have RM commandos who are elite arctic experts, even American marines are being trained by British marines in arctic operations these days. Norway forms part of the British led NATO amphibious assault force doesn’t it?

I thought that was the UK Netherlands group, not Norway.

I think all foreign training and deployment missions need to be scrapped. The prosecution of soldier F of the occupying English Protestant army of Catholics seeking civil rights for murder is a serious stain on the army. As was the cover up with the evidence and the government approved Widgery Commission that suppressed the truth. This allowed several English army murderers to die in peace or avoid prosecution via legal loopholes. How third world. The Torres tried to bury this by trying to put legislation in to protect these murderers with time limits and pirating ton’patriotism’ to cover up embarrassment.… Read more »

And then you woke up and had your cornflakes.

Save your rabid hate filled loonery for a soap box on speakers corner Iqbal, it’s not welcome here and neither are you.

Yeah, the British army and officers hush up murder, lie to an official enquiry and use legal loopholes to allow the murderibg soldiers to die or get legal immunity on technicalities and I’m the loony!

There is a difference between patriotism and blind nationalism.

Well that ended everything for tonight.

So Iqbal I’d like to congratulate you on your grammar. Lot’s of people struggle with the transition from Cyrillic.

Well spotted, it will be off to the salt mines for him if his covers blown you know …

In other news, sun rises this morning, will probably do the same tomorrow.