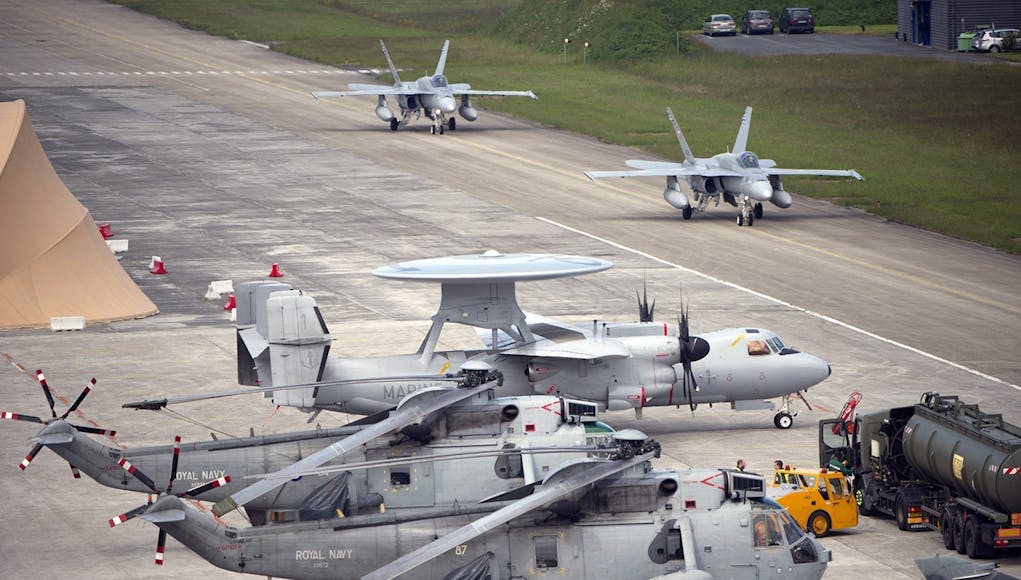 Exercise Skinner’s Gold saw 849 Naval Air Squadron send two Sea King Mk7s across the Channel to France, however it is understood that one developed a serious gear box oil leak. According to the Ministry of Defence:

“The crew set it down on the outskirts of Brignogan-Plages, 20 miles northeast of Brest and a dozen from its destination, slap bang in a field where holidaymakers are warned not to camp.

Far from admonishing the fliers, locals – led by the mayor – were quickly on the scene, offering the crew food and drink, before French commandos guarded the site overnight while spare parts were flown over from Culdrose. 849’s engineers had the helicopter fixed and ready to take her place in the exercise within 24 hours.

The Baggers serve both as the Navy’s airborne early warning against air attack and the long-range eyes helping to direct friendly aircraft on to targets, be they enemy fighters or armour and troop concentrations on the ground – so powerful is the radar and the software fitted aboard the veteran helicopter it’s equally adept looking up or down.”

“Their pilots and crews were able to impart invaluable knowledge about live CSG operations and current tactics. With the Queen Elizabeth and F-35 Lightning now looming large on the horizon, these are vital preparations for the Royal Navy.

For us, this was a rare opportunity for the Royal Navy’s only airborne fighter controllers to work with maritime fourth-generation fighters.”

“The first week gave the crews the chance to control many different tactical scenarios including air interdiction – guiding friendly fighters on to enemy fighters – and ‘air policing’, maintaining no-fly zones as British jets did over southern Iraq in the 1990s, for example.

Thanks to a data link, the Sea King crews were able to provide fighter pilots with all the information they needed about what was happening in the sky, on land and on the sea – giving them the upper hand when they entered the fight.”

“What a great chance to come to France and train with some of our closest allies. The opportunity to hone my fighter control skills with such advanced aircraft was incredibly challenging but also very rewarding.

I’m extremely proud to have completed my training as a fully-qualified observer. These are great times.”

The Sea King force will shortly pass on this skill set to the new Crowsnest Merlin.

I do agree though that at some point I would love to see our AEW on something with higher service ceiling and longer endurance and if AEW Osprey ever came to reality it would seem a good option. Presumably they’d need to pressurise the cabin though.

There might be a reason for the selection of the test pilots for the AW609 http://www.ainonline.com/aviation-news/business-aviation/2015-03-04/test-pilots-say-aw609-easy-fly%3Famp?client=safari
Already pressurised Crowsnest is portable

The osprey aew solution is still vaporware. If we had gone down that route we would have an even bigger gap in capability. The Merlin solution is highly compromised but it was the best option available considering the budget/timeframe and short sighted choice of not going cat/trap

Well said…. maybe a solution for 10 years time and beyond…

Quote: “short sighted choice of not going cat/trap” So given we decided 40 years ago there is no strategic or cost / benefit advantage to nuclear power for surface ships and that the QEs will not have Admiralty 3-drum boilers so ruling out steam Cats and the EMALS system being totally unproven with unreliable delivery and an unknown price tag in 2010 the F-35B / ramp was the only logical and cost effective choice. A choice that allowed us to build two state of the art carriers for £7 Bn / $10 Bn with the first putting to sea next… Read more »

No strategic or cost effective advantage over nuclear powered surface ships?? Ooookaaayyy… Tell yourself whatever to help you sleep better at night. The RN couldn’t have nuclear powered carriers because they couldn’t afford them. They couldn’t build them either. They would had to rely on America for the tech. The RN can barely field the two QE ships that have now. Nuclear powered ones? No chance of that. The QE ships are newer than what you had before, but they are inferior to the Nimitz class supercarriers. Let’s not get carried away now, Brit. The EMALS catapult system is new… Read more »

I understand that cat/trap might have worked out more expensive (we will never know, all we know it was more expensive once the contracts were signed to change them), the problem is we are completely stuck with helo/f35b. The other major carrier countries, ok there are not many, went down the cat/trap route meaning that there will be more options available not only for AEW but also missiles, refueling etc. We are already seeing the limitations, such as the b’s not being able to carry certain missiles that the c’s can. The whole carrier project was poorly thought out, not… Read more »

Because it would have been impossible to fly Bs off a ship with an EMALS system that took some time to get working, though the Ford Class didn’t have any problems throwing pickup trucks several hundred yards in the YouTube video last month that went viral. And didn’t the DoD say very publicly that they’d help fund our use of it?

We will only be able to support our own jets and those of the USM. It’s an embarrassment. The most expensive helicopter carrier in history, and people talk of value for money…..

Anyone know where the photo was taken with the F 18’s in the background?

You mean “help” the same way the French cant get any equipment to Mali without our C17’s!

Lets not go down that route. We also needed their help in the past and we will need it a lot in the future to escort the carriers. NATO is all about filling gaps in capability of member states

Steve Its not about going down that route, the reality is France is lacking militarily in large areas, and NATO is the US backed up by the UK with other countries. Dont confuse NATO assiatance for other countries not having our capabilities. From Intelligence to tankers and strategic lift and missiles like Brimstone used in Libya by the RAF, the French could not even use their weapons due to inaccuracy and not all weather capability. I understand we need assistance backing up our own rebuild of carrier ops etc, but this is mainly by the US and not a one… Read more »