Home Europe Royal Navy chase off Spanish ship after it cuts across path of... 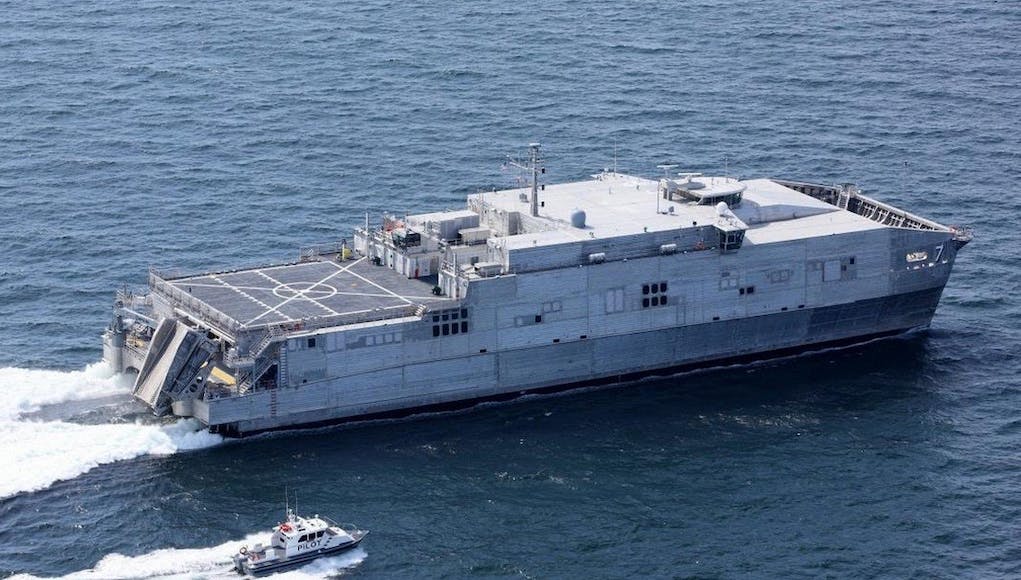 The Royal Navy were forced to chase off a Spanish vessel this morning as it cut across the path of a visiting US Naval vessel in Gibraltar.

The USNS Carson City is a Spearhead class expeditionary fast transport, currently in service with the Military Sealift Command.

The American naval vessel was the result of an effort to design a high-speed, shallow draft vessel intended for rapid intratheatre transport of medium-sized cargo payloads.

In addition, last May a Spanish patrol boat reportedly tried to “hassle” an American nuclear submarine attempting to dock at Gibraltar.

This comes despite Spanish Foreign Minister Alfonso Dastis saying Spain will not seek to regain sovereignty over Gibraltar in Brexit talks.

“I won’t make an agreement between the EU and the United Kingdom conditional on recovering sovereignty over Gibraltar. We will try to convince the Gibraltarians that this is a route worth exploring and that it would benefit them too.”

A former Ministry of Defence adviser saying that Royal Navy warships should be sent to Gibraltar to ‘protect it from Spain’ while Britain negotiates a deal to leave the European Union.

“First and foremost, Theresa May, Boris Johnson, Liam Fox, Michael Fallon, and David Davis should make a joint visit to Gibraltar as soon as possible.

The Ministry of Defence should also make a grand gesture by increasing the Royal Navy’s visible presence in Gibraltar. This would send an important message to the Gibraltarians.

The UK needs to prepare for the worse. This could include maintaining a robust air bridge if the land border is closed. Also, in the event of a border closure by Spain, the UK must be prepared to respond with appropriate, firm, and proportionate measures against Madrid.”


The Spanish government had called for joint sovereignty over Gibraltar after the UK decided to leave the European Union.

The trash bags just can’t help themselves can they ? SMH, what kind of allies are these ?

Silly and unworthy of the Spanish authorities.

Its time we agreed to base a new river class OPV permanently in Gibraltar.

Its time we actually showed some balls and boarded and seized one of their boats. This is deliberate and dangerous provocation.

Definitely agree. It would show the UK goverments commitment to Gibraltar and I’ll be able to enjoy Spains salty response.

A River class OPV, a reinforced infantry company, and a flight of fighters.

Madrid’s moves are obviously self-defeating. The small opening Spain should be exploring (if it really wants to make a positive case to the people of Gib) is that while the Rock voted squarely to remain in the EU, it is likely being taken out of the EU against its wishes by the UK’s vote to leave. So much for London’s oft-repeated statement that ‘the wishes of the people of Gibraltar are paramount’. A cynic might remark that they are – but only up to a point…. Madrid should be thinking of some kind of economic investment package, tax breaks and… Read more »