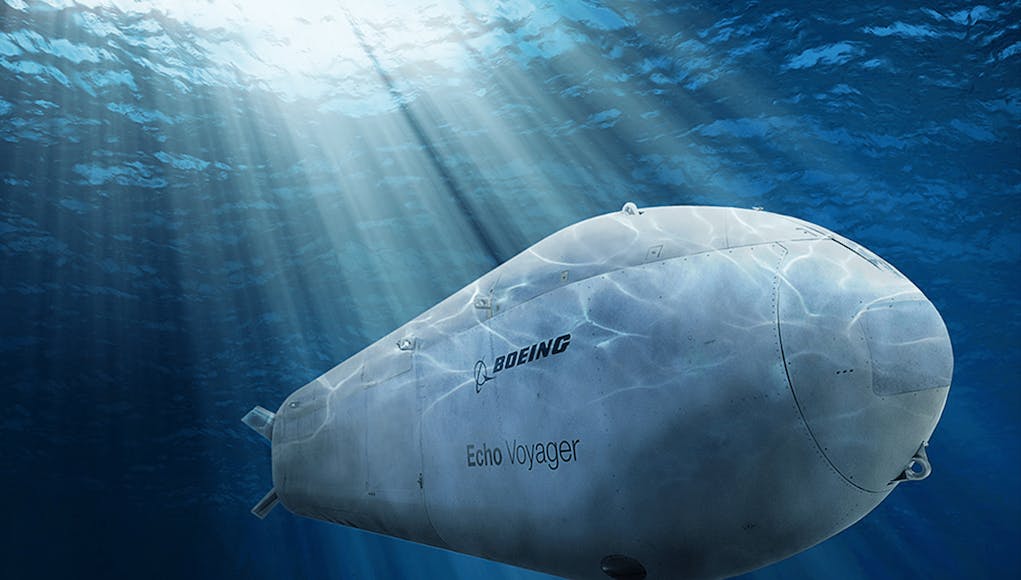 The competition seeks proposals to develop an autonomous version of an existing large underwater vehicle for the Royal Navy.

According to the competition notice, the system will be procured to address the Royal Navy’s need to understand the utility and operational boundaries of an autonomously operating unmanned underwater vehicle (UUV) system.

The Royal Navy say that contract will have two stages, a 1 year long research, design and re-fit stage and a testing and trialing stage. In the latter stage it is expected that the system will be tested in representative environments for extended periods; the sea trials in Stage 2 may be up to 2 years long.

“Broadly, Stage 1 consists of the research and innovation to support autonomous system development including fitting to an existing vehicle and a short seaworthy / autonomy test; and Stage 2 consists of more in-depth testing to understand the future utility and concept of operations. Some minor refit/adaptation will be permitted between tests in Stage 2 but the system is expected to be adaptable in order to reduce down-time.

The MoD does not propose to own this test system at the end of the contract, but reserves the right to undertake further work and procurement through the framework agreement.

In particular we are looking for a flexible UUV capable of hosting different payloads / sensors which will be utilised in a range of testing scenarios. This range of tests will determine capability limits of a UUV, to assist in the development of future requirements and the design of future capabilities.”

According to the notice, by the conclusion of Stage 2 the system should be able to:

The following is a breakdown of the above scenarios, directly from the notice.

In this scenario, an XLUUV is tasked to gather covert intelligence of traffic transiting in a maritime operational area. The XLUUV leaves its dock and autonomously, and covertly, transits underwater to the maritime operational area. It positions in the operational area either at or below periscope depth, and monitors traffic for up to 3 months; above water electronic, underwater acoustic and optical intelligence gathering using a range of sensors. It may position on the sea floor and release a tethered sensor to periscope depth that would then be recovered before returning to periscope depth. During this period a reportable incident occurs, in this case the passing of a vessel of interest, whereby the XLUUV reports the incident to control and continues monitoring.

In this scenario, an XLUUV is tasked with enacting an anti-submarine barrier in a particular location. The XLUUV leaves its dock in the harbour and autonomously, and covertly, transits underwater to the checkpoint. Upon reaching th

e checkpoint, the XLUUV proceeds to patrol a pre-determined area for up to 3 months. During this period it encounters (recognises the acoustic signature of) a target of interest, and identifies it as hostile. Upon identification, it covertly reports the incident to control, before returning to station and continuing the patrol. Alternatively, upon reporting the incident to control, the XLUUV could be re-tasked.

In this scenario an XLUUV is tasked with covertly deploying a sensor payload to the seabed and recovering it at a later date. The XLUUV leaves harbour and autonomously, and covertly, transits to just outside the operational area, rising to periscope depth to await signal. A ‘go code’ is transmitted from control; the XLUUV dives to operation depth and transits to operational area before dropping the payload on the seabed. The XLUUV exits the operational area, rises to periscope depth, and transmits a ‘complete code’ before autonomously, and covertly, returning to harbour or holding area. At a later date, an XLUUV is tasked with covertly recovering the sensor payload from the seabed.

The total funding available for this competition is £1m for Stage 1 (research and development of an autonomous control system and re-fit of an existing manned submersible to implement this innovative autonomy); and a further £1.5m for Stage 2 (rent and testing of the novel autonomous functions of the submersible at a manufacturer-proposed operating base for up to 2 years).

Very interesting. 1 million doesnt seem like a lot for such a task though? Still it’s good to start somewhere.

The beginning of the end to endless months living in a steel tube. The submariner is a special breed, but for how much longer? Recruiting such people is very specialised and training is costly. If however, autonomous subs become the norm, manned vessels could be restricted to nuclear deterrent and Astute until such time these are TOOS? Maybe, manned subs will still be necessary but a large part of the future RN operations could be autonomous?

The whole concept of Trident seems outdated to me. Designed before GPS, extensive satellites, swarms, hackers, mobile phones etc. Surely only a matter of time before any scriptkiddie with a few drones, GPS, a laptop and enough time, could find a trident submarine.

Anything is possible when it comes to ‘tech-nerds’ though, I suspect an awful lot of hidden costs are due to such precautions and countermeasures?

as long as BAE don’t get a contract out of it. and that they wouldn’t be built on the clyde, they’d be obsolete before they’re finished

Are you suggesting that your scriptkiddie is going to be fitting their drones with dipping sonar? Not sure how else they’re going to search the North Atlantic for a submarine….

Truth is often stranger than fiction however, my ‘tech-nerds’ would be employed by states, where costs could be limitless depending on which power base is behind it?

I was referring to Mad Murdoch and his or her idea that “any scriptkiddie with a few drones, GPS & a laptop” could find a nuclear submarine. Clearly he or she means it could be done without the resources of a state. I may be wrong bit I find that idea silly.

Remember, they said the English electric lightning would be the last fighter!

This is good stuff. These seem like sensible mission profiles with the issues regarding lack of persistent high-bandwidth communications with a submerged vessel taken into account and worked around.

It’s ominous seeing all the illustrations with Boeing and Lockheed Martin logos and/or credits on them though. It’s great to see the UK/RN looking at cutting-edge innovative weapons systems but I really hope that this initiative not only delivers usable systems but also helps drive forward in-country (UK) innovation and technical capabilities within our industrial base.

I’d like to think that BAE Systems can combine it’s SSN & UAV (Taranis) expertise to put together a UUV demonstrator …..

QinetiQ, James Fisher and Ultra really need to be involved in a UK consortium.

JUST KEEP BAE AWAY FROM IT THEY’VE A BIG ENOUGH MONOPOLY ON UK DEFENSE ALREADY.

So thats why my wife has been popping down to the local navy base.

Did anyone mention wizard’s sleeve!

Looks like Boeing will be getting more of our money don’t think anyone in the UK has done any work on something like this.

might make up for the small number of Astutes

AND WON’T RIP THE NATION OFF FOR£1.4 BILLION EACH.

We are accelerating into a hyper dangerous world where military technology is evolving so fast across so many domains that bad actor nations / terror groups are gong to have so many more ways to create havoc globally within the hour. Like everyone else on this site I’m a big proponent of every NATO member spending at least 2.5% gdp on defense to protect western values, but we have to face the reality that the weaponisation of AI is a Pandora’s box. The odds of an AI war by mistake or terror groups creating a 9-11 type event on a… Read more »

Agreed. A successful AI attack on power grids and other critical infrastructure would be devastating and could ultimately result in as many casualties as a full out nuclear conflict…

As predicted in the Terminator series of Films.

This is a BIG UUV. Operating for up to three months and with sufficient fuel to go 3000nm, patrol and then come back again. The specification seems to be a close match to the Boeing Echo Voyager which comes in at 50 tons plus payload. This has traditional Diesel Electric and Battery propulsion and so isn’t completely covert as it needs to snort.
With no on-board maintenance the UUV is going to need a lot of redundant hardware to have a 99% plus chance of coming back from a three month deployment.

Boeing Orca, which is even bigger, appears to be the one to beat.
But its actually more than 3 months…as the transit to and from an operational area 3,000 miles away is added on, with an efficient transit speed of c3 knots and 6,000 miles to cover its going to add a couple of weeks on to that.

Humph has an article saying we won’t use convoys in a future conflict.

Given the size of the sea (something he pushed forcefully to argue that QEC could lose itself in the ocean to avoid an enemy), how does the RN plan to take the fight to enemy submarines without convoy? How will merchant ships be organised?

I thought the best thing to use against a submarine is another submarine.

I’d expect our Astutes to be into the Barents and Norwegian Sea’s in a Russia war scenario.

So basically our submarines are going to do the offensive patrols that the RN obsessed about in WW1?

Here’s hoping they are more successful next time. It is frustrating that there are no longer any lessons from history to be gained from this sort of thing. Meh.

I do not know that for certain Geoffrey….

But in the Cold War up north is where our SSN were found, in conjunction with SSN of the USN hunting Red SSN and SSBN.

They are constrained by geography. They have to come that way to reach the Atlantic.

Seems like we will be lucky if our Astutes leave the dock. HMS Agamemnon still stuck at Barrow. What has come unstuck this time?

Pete B
Reply to  4thwatch

HMS Agamemnon isn’t planned for commissioning until 2022, so fully expected to still be in Barrow, Audacious and Anson should be the next boats to be handed over.

Command and control is going to be interesting, one of the ways submarines get around some, but not all, of those problems is having wetware in the loop.

The undersea world is a tricky environment.

So when stuff goes wrong on board who fixes it? Or battle damage?

The requirement does sound like an unmanned BMT VIDAR 7 minus crew and weapons.
https://www.bmtdsl.co.uk/bmt-design-portfolio/submarines/bmt-vidar-submarines/