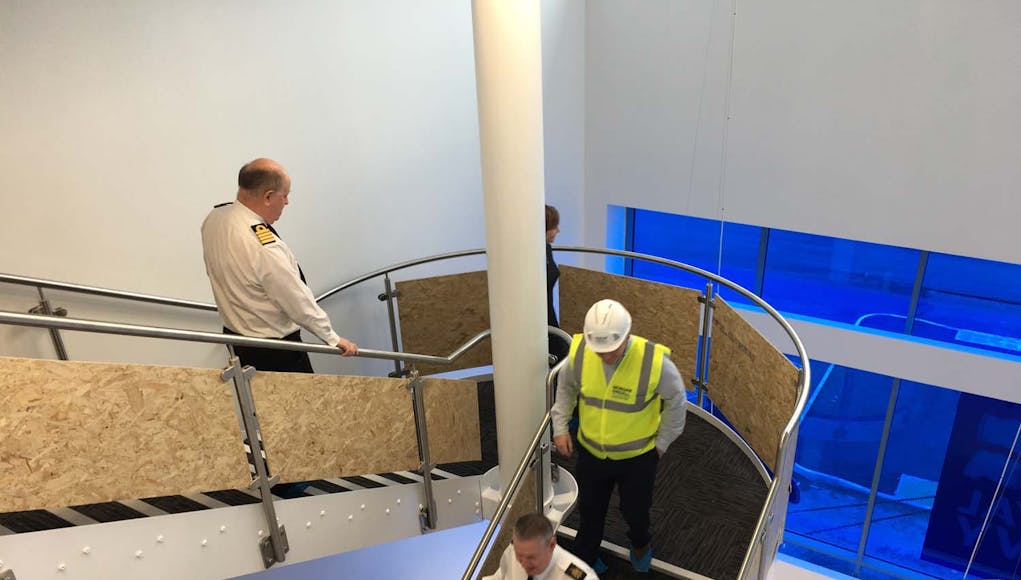 HMS Cambria in Cardiff Bay has been formally handed over to begin the fitting-out process as the Royal Navy’s sole reservist base in Wales.

“The complex – which will also be used by Royal Marines Reserves, Wales University Royal Navy Unit and Cadet Forces – replaces a 40-year-old facility at Penarth in Barry, which has been Cambria’s hometown for nearly 75 years.

Its successor is barely a mile from Cardiff city centre and its location at Roath Lock, on the northern edge of Cardiff Bay, makes it much better for supporting visiting warships. Final checks will be carried out and tarmac laid, before furniture and office equipment is delivered to equip rooms and training spaces.”

“I’d like to say a big thank to everyone involved for all their hard work, this building will make a huge difference for the Royal Navy in Wales,” Captain Wyatt said.

“It has been a team effort from Associated British Ports, Morgan Sindall, the Royal Navy and Wales RFCA. The next challenge is to get the building ready for the Royal Navy move in early summer, and it certainly will be one of the crown jewels in the Defence estate.”

Shouldn’t we be improving the living conditions for the full timers before building stuff for the reserves?

I think both are needed.

En suite modern accommodation has been standard for full timers for a good few years now. I had a double bed, en suite bathroom and shower , internet access, loads of storage space, and that was back in 2008 at Yeovilton.

Good to see there is a plan to increase reservist numbers.

Isn’t HMS Severn going to be (or already is) forward based at Cardiff with a partially RNVR ships company?

Surely we should be considering building a new shipbuilding yard to replace Glasgow in the event that the Scots decide to get indy.

Slightly off topic, but I watched Fury the other night and I was impressed by the clip where 3 Shermans took on the Tiger, with the last M4 doing a dance right at the end. Well Ive just come across something similar from Syria where a Turkish ACV 15 (in the the hands of the HTS) did a dance with a Syrian T72
https://twitter.com/Abdurahmanhrk/status/1231187080270708736?s=20