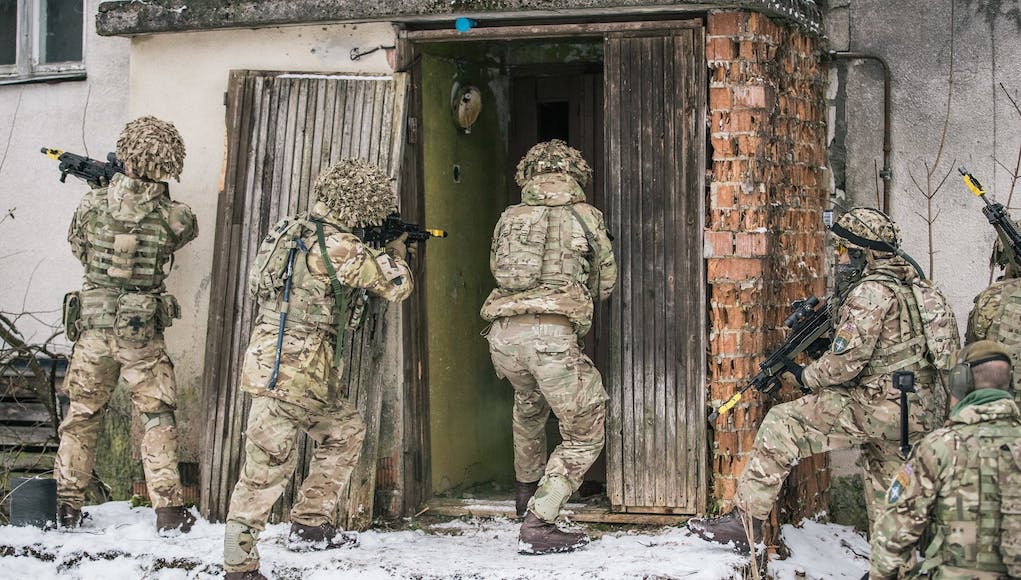 Soldiers from 1st Battalion The Royal Welsh are currently stationed in Estonia in support of the UK’s commitment to NATO allies in Europe to ward against any potential acts of aggression.

The Royal Welsh are heading up the 800 strong multinational Enhanced Forward Presence battlegroup, which has the support of a number of other British Army units.

The training took place in and around a real village called Varstu in the south of Estonia and the exercise saw the troops attack an abandoned block of flats being occupied by an opposing force. This block was next to three blocks inhabited by residents of the village who were able to watch events unfold.

“Being in Estonia is my first deployment whilst serving in the Army. It’s a new experience and my first Christmas away from my home and family. I miss them loads, and I look forward to seeing them in February when I get back.”

Fusilier Hagart appeared to be missing his family Christmas more than enjoying the training. Fibua is hard work, personal memories of Imber Village

Fusilier Hagart sounds too damn soft to facing “the Russian Bear”. I guess it is just a stark reminder of just who we are sending to protect/defend us, SMH.

Your seriously judging an 18 year old on his first deployment for admitting he misses his family? Maybe a little more respect for those who not only sacrifice so much in peace time to be deployed around the world away from their loved ones, but who might one day be putting their lives on the line to protect you.

So what make you a expert key board warrior

Steven you are a prat! He’s a young lad offering himself up to where the government want to send him.

Steven, Fusilier Hagart is braver than you and I put together. He is on the front line facing that Russian Bear…have some respect.

Steven have you ever served ?????this will be 5 tour and my last tour and i will continue to serve after i left

Unless we send robots over to Estonia, most people stationed there will miss their families. That does not make someone soft. If anything, it’s going to make them more determined to get back if things get hot. Let’s be respectful.

Well I hope no one asks them for a cup of tea. Myself and another Brit who worked for the UN in Bosnia stopped one day and did ask them when they were having a tour of duty there. We were told to bugger off. Not to bad as the Danish DANBat gave us some. Will never forget that Welsh ‘kindness’ for sure.