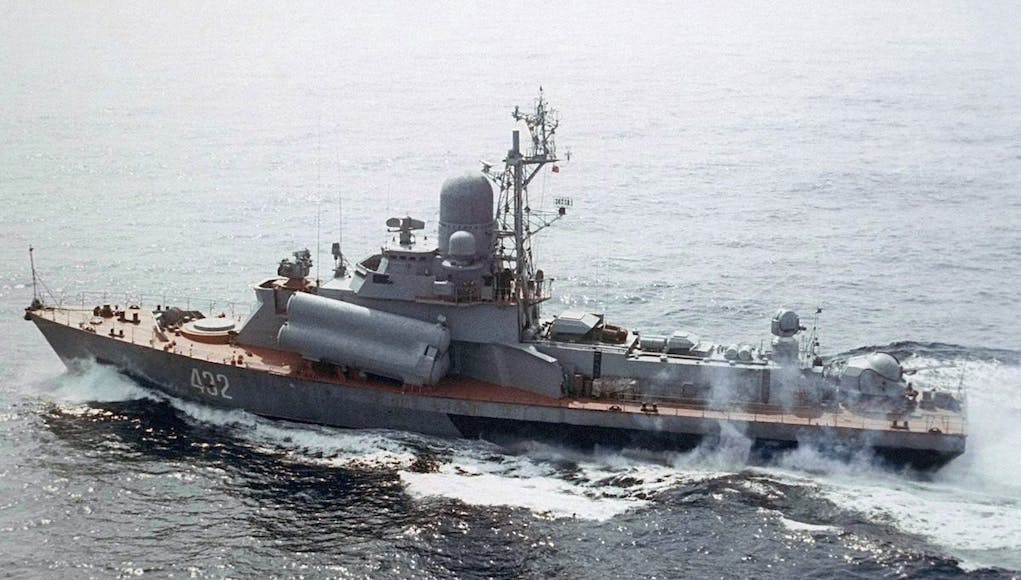 Russia is moving forward with a plan to modernise the Project 1234 missile corvettes, according to local media.

Speaking during a visit to the North-Eastern Repair Center, located in the Kamchatka Region, Deputy Defense Minister Alexei Krivoruchko said,

“Today we are discussing with the enterprise the issue of modernizing a series of Project 1234 small missile ships. We are talking about three such ships. Following the upgrade, their service life will be extended by eight years with a possibility to extend it by eight more years after the factory repairs.”

The upgrade process should take five years once a final decision has been made, according to TASS.

They may be dated, old technology but they really know how to pack a punch on a small platform….

Makes you think how effective the Rivers could be with a phalanx and some missiles.

Agreed, while we fail to see the importance of fast-tracking our Arrowhead 140’s, Type 26’s, and of course, up arming across the fleet. Our subsurface Astutes needs to be increased as well as shore-based anti-ship detachments.

An island nation offering minimal protection, what a sad state of affairs.

Why don’t we (RN) know how to pack a punch on a big platform?

We should be countering this, it’s ridiculous how a Russian Corvette can outgun our largest destroyer! The RN surface fleet is horrifically under armed.

Scary isn’t it but fact is if they came into conflict and certainly after their updates, I would not back the chances of a Type 45 which would be about as humiliating as it gets. A Corvette carrying 16 anti ship missiles, hell they could sink our whole Fleet.

Mark B
Reply to  spyintheskyuk

Is this not the standard Russian tactic – cheap and cheerful weapons in vast numbers so we literally just run of of ammunition. As long as we have quality counter measures in quantity along with the rest of NATO ….

‘Russian Nanuchka-III-class corvette “Smerch”…’. Are they taking the P Where’s Mr Bond when you need him?

Perfect fodder for a Wildcat with Sea Venom!
Although they look impressive, they have no over the horizon targeting capability and will need to rely on MPA or, become a missile carrier as part of a larger fleet.

Would be nasty in a within visual range fight though!

I’m an ex-RN aviator (70’s).
My recollection of the Osa and Komar missile boats was that NATO was scared rigid of them.
These are modern versions of those boats and probably 100 times more effective.
I wouldn’t want to be in the same ocean as them!

Now maybe I’m wrong but plenty folks in here always banging on about how the guns are never big enough on RN ships and how woefully under armed they are. But isn’t it the case the smaller the ship with more armament and munitions on board is at greater risk of going up in a Big Bang if it gets hit ? This is the reason RN opv’s don’t have 15” guns I thought. As ever though I may be wrong

The Russian chat about all the improvements they are going to make. How many actually come to pass?

To which fleet are these vessels assigned? Cannot find on Wiki. Baltic? Northern? Pacific? Black Sea?
And are they deployed as coastal defence vessels or for blue water ops
Because if the former where is the threat to the RN’s escorts, which presumably are out in the Atlantic or in the GIUK gap in a hypothetical war?
Would they last 5 minutes coming though the Norwegian sea towards NATO?

I believe the first couple upgraded are from the Pacific fleet, just for costal defence. They are waiting for karakurt missile ships but Black sea and Baltic get priority for them

Thanks Ulya. I noted Kamchatka which of course means Petropavlovsk, for this work at least.

A correction sorry Daniele, Pacific fleet might not get karakurt, different articles say karakurt just for Caspian, Baltic and Black sea, Pacific fleet will get 6-8 project 20380 and it’s variants plus Gorshkov frigate once engine issue sorted and final upgrade decided. It’s a little hard to get hard facts at the moment, Navy has big plans, the designers have even bigger hopes for fantasy fleets (and money) but as always government budget and MOD has final say

maybe design something worthwhile around the archers, sorry, typo we we should just get rid of those, remove the h.m.s from them and them navy boat archer, and give the rest to the border agency.