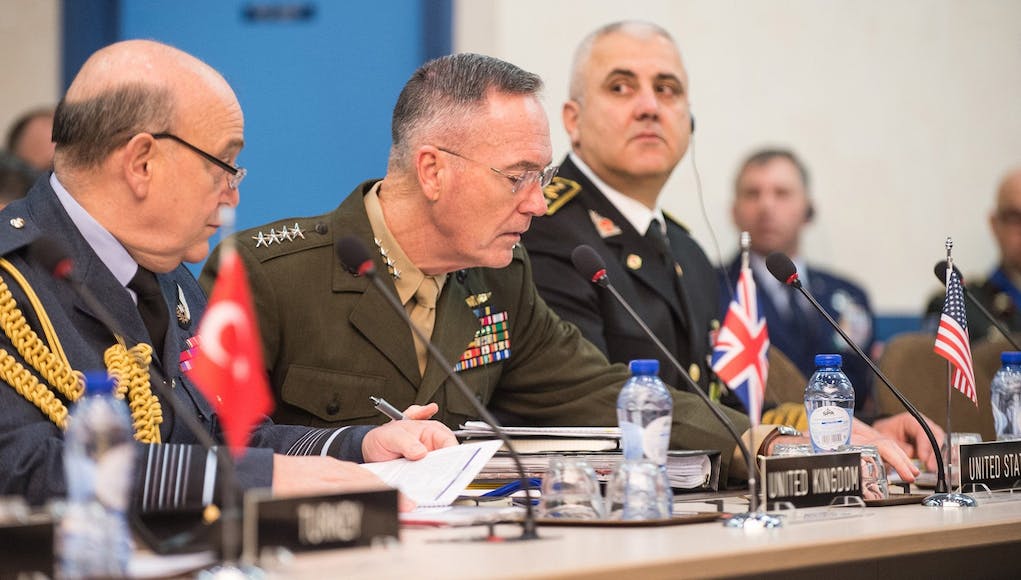 Russia ‘is a threat to Europe and beyond’, according to US Marine Corps General Joe Dunford at a NATO event in Brussels.

A resurgent Russia is the greatest threat on the continent, and the alliance is putting in place capabilities to deter the Eastern neighbor, Dunford said.

Russia has modernised many aspects of its military, including redesigning and modernising its nuclear capability, modernising its maritime capabilities, developing new cyber and electronic warfare capabilities and fielding anti-space capabilities. The alliance has been on the path to addressing the Russian modernisation program, he added.

“I would say that none of us are comfortable with where we are,” Dunford said. “If you are complacent in this business, you are obsolete. So you need to stay focused.”

He will say that its all about keeping budgets high with project fear .. The truth if you look at Russian military hardware its backwards . The don’t yet have clean drinking water in Russia its 2018

Russia has a population of 144m. France and Germany alone have a combined population of 145m. Russia no longer has the population resources to drive to the English Channel in 2 weeks. However,your point about the the lack of clean drinking water is valid. The necrotic state of Russia should not be present as evidence of a lack of threat. I would argue it is evidence to the contary. How often have external threats and adventures been used to deflect attention from domestic problems. Even though a huge amount of consideration has to be given to factor in Russian logic… Read more »

That’s just about Putin’s logic in a nutshell propaganda on steroids he will go to any Depth’s to remain in power but the facts are Russia is now going backwards and being left behind by its big neighbours ..

All with John’s answer. I also don’t think the west has played a very sensible game re Russia but we are where we are. I don’t think Russia is going to roll through Europe because it would lose but Putin is a Judo player and a student of Sun Tzu. He counter balances where the west is weak; He has more nukes than RoW capable of delivery by LS&A. He owns the arctic. He has best/most SAM batteries in world. He has best cyber in world. His self propelled artillery is the best in world. His subs are up there… Read more »

For all we know there is a pact between the east and west to fake aggression to boost respective defence spending. I’m all in favour of that, given the gradual change of the military to a policing and humanitarian role; which will ultimately lead to a global humanitarian task force. Then Gerry Anderson’s vision of the Thunderbirds, complete with additional overt corporate sponsorship, will be realised. My money’s on the first ship of type being the disaster relief landing ship “Red Bull 1”.

If there is a plan, we just don’t know if it includes military adventures beyond its current force dispositions? If Russia is a threat, then it comes at a worrying juncture in European defence planning. The EU appears intent on forging ahead with a unified military force, which will ultimately weaken NATO, purely by diluting its commitment to the former during formation? If Russia is intent on claiming back territory from bordering countries, then it must be encouraged by Europe’s current vacillations. In regards to the UK, the government is almost totally focused on the NHS woes and Brexit. Defence… Read more »

This should be for the EU to handle. If not now then soon. They can spout all the BS they like about their defence plan but they now need to deliver facts on the ground not endless posturing.

The EU will run crying to the US and hide behind her skirts the moment there is trouble.

UK should concentrate on GIUK gap and out of area expeditionary capabilities.

The British Army is in the process of being run into the ground so we do not need a new focus on defending Eastern Europe.

We should contribute elsewhere, like in the Atlantic, via the RN and RAF.

Troops are not the future moving troops on the ground up against Apache type gun ships would be sending troops to the grave its all tec these days large ground forces are a waste of money and time ..

Well said both of you.

I think we should look to be re-inforcements for Europe and not be based there at all.

To that end we should increase our expeditionary capability with more fighters and attack helicopters that can get into theatre quickly and get back if needed.

Air superiority is still the no1 task required to enable anything else.

Daniele You are totally correct the EU and our European allies should worry about their Eastern borders, the UK should definitely go back to defence position 1. Maritime power and securing our lifeline across the Atlantic and Atlantic supplies. The UKs gift to NATO should be but currently is not adequate, a royal marine expeditionary force to reinforce any incursion into Norway or Sweden Anti submarine frigates in adequate numbers eg type 26 and hopefully type 31s (at lest 8 type 26 and hopefully at lest 10 type 31s) Astute class hunter killer subs. The current force level of just… Read more »

All true. Foreign aid is just a crutch for corrupt governments and dictators to prop themselves up. Providing no insentive for them to do right by their people. As in the end overly preachy and charitable people in other countries will do their jobs for them and they can go about their lives stealing, murdering or allowing murder to be committed as they wish. One time the US gave a country 100 million $ to rebuild there water infrastructure. The next thing they did was cut their whole water department, outright steal $90 million, misappropriate $7 million to buy ex… Read more »

I’ve stated the following before and believe the EU and Nato are the greatest threat to stability and prosperity.

Nato idea was noble but the Americans do gain ten fold due to size of budget therefore projecting reach through Nato.

History shows that the vast majority of nations will unite against an evil threat when conflict occurs and feel the existence of Nato is creating more harm than good.
Russia is a European country lets work with them and slow down the pace of possible impending oblivion .

That is a very naïve view of history. Nations unwilling to take steps when they still could have done some good allowed the Bolsheviks to rise when they could have intervened in the civil war. This apathy was again repeated by peace at all costs idiots who allowed Germany to rearm and seize Czechoslovakia. Japan was allowed to rampage across Asia until they made the mistake of attacking America and it’s protectorates directly. That is just one 50yr period. Russia will always see Western Europe as a clear and present danger and will always see Eastern Europe as a place… Read more »

is there an article on this site which George Allison hasn’t written? lol

He is a one man army, Rambo with a laptop 🙂

Fearmongering by that wretched Durnford. Russia-bating has become the new antisemitism. It is shameful that race-bating lies are repeated in the media, just because a buffoon wearing a uniform utters the lies. · Did the Russians pay $5 billion for a coup in Ukraine in 2014? Oh, no, that was the US State Dept. · Did the Russians threaten Kim Jong-Un with their ‘nuclear button’? Nope… That was Trump. · Have the Russians moved their military closer to NATO by 1000km? No, it’s NATO that moved closer to Russia, breaking military and diplomatic agreements with Russia in the process. ·… Read more »