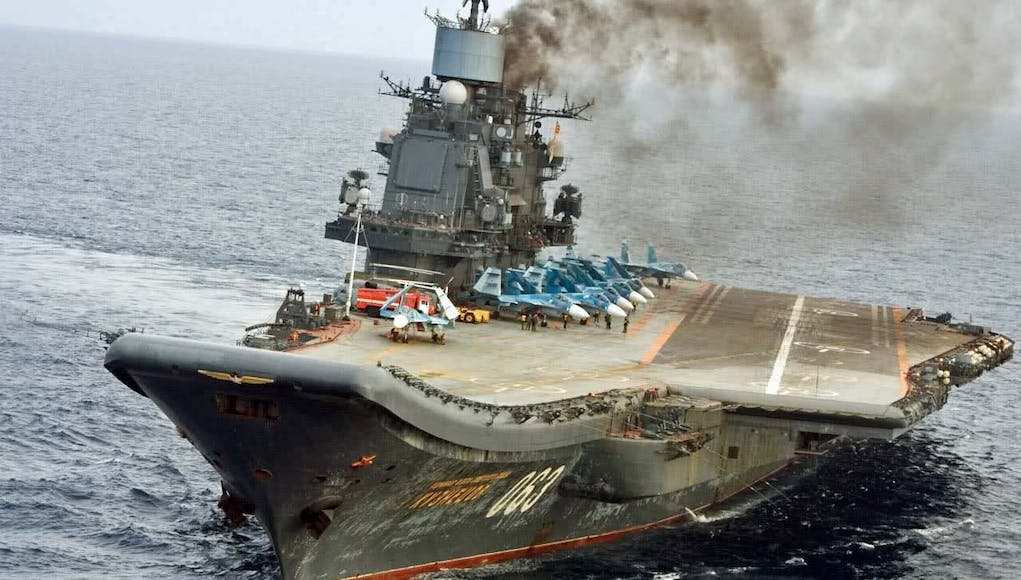 Share
Facebook
Twitter
Pinterest
WhatsApp
Email
Russian aircraft carrier Admiral Kuznetsov is seen here being towed home by a tug boat after breaking down in a storm. Kuznetsov is an aircraft cruiser (heavy aircraft-carrying missile cruiser in Russian classification) serving as the flagship of the Russian Navy.

She was originally commissioned in the Soviet Navy, and was intended to be the lead ship of her class, but the only other ship of her class, Varyag, was never completed or commissioned by the Soviet, Russian or Ukrainian navy. Later, this second hull was sold to the People’s Republic of China by Ukraine, completed in Dalian and launched as Liaoning.

This video filmed in February 2012

Doesnt look recent and to rough for the Mediterranean! Good try UK stooges!

That’s why tugs deploy with her then!

So Instead you have a British one that’s on its as after 30 years ? makes sense

You might want to look up the B52, C130, F16 and the A10 which are still being used by the US military….and were built back in the 70’s or earlier in the case of the B52.and we have a few aircraft carriers still under commission that were built in the 70’s…..Maybe you need to do a little more research before you make your comments…..and sound so ignorant……LOL

When is the least time US Navy Aircrft Carrier needed to be towed back to port Nikola?
Rotting Russian Rust Boats good for nothing except being scutteled for coral reef building.

A 40-year old Russian carrier, the “Varyag” breaks down in a storm and needs a tug. So what? 20 days after commissioning, the $437 million US combat ship USS Milwaukee broke down in fair weather. Needed a tug, too.

From the “Navy Times”:

The littoral combat ship Milwaukee, the Navy’s newest ship, broke down Dec. 11 and had to be towed more than 40 nautical miles to Joint Expeditionary Base Little Creek, Virginia.

The ship suffered an engineering casualty while transiting from Halifax, Canada, to Mayport, Florida, and ultimately its home port of San Diego.

It isn’t half advanced as nato technology though, also nato operates carriers over 40 years old that are more advanced than the Kuznetsov and they are still fine. Former british carriers that we sold to india like the 62 year old INS Viraat (HMS Hermes) is still fully functional and much more capable. The clip is showing the BROKEN DOWN air craft carrier being towed home….

Nikola Blažević, don’t see any American WEAPONS that are 40 yrs old and working?? Try looking at B52 bombers, introduced into service in Feb 1955, that makes them SIXTY years old…and working….

How about the lochead c-130, Fairchild A-10 thunderbolt, McDonnell Douglas f-15, general dynamic F-16 are all over 40 years old, and still supreme to any Russian aircraft.

How about the P-3 Orions that were sold to Iran pre-1979 revolution. Same with the F-14s. They still fly even after being hit by sanctions.

Those tomcats are in a bad way now though

And would see off Ivan with a broadside

I hope they have breakdown cover.

Flagship. Pride of the fleet.

To put a Russian Aircraft Carrier out of commission, you sink the tug ??

I also read that at least a third of their force in Syria is grounded due to serviceability and logistics problems! Is there any truth in this?

Hahaha yea just like pigs fly maybe u brits are just jelous that ussr russia always was and is ahead of u in every aspect of military tech furthermore this is a clip about most powerful tugs in storm exercise not a brake down so u brits need to slow down with ure propaganda not everybody is dumb at least out of uk.

You’ve been watching too much RT propaganda. If you don’t trust the BBC or CNN then go and watch Hong Kong or Singapore news. You may be surprised by what you hear, and its not censored by Putin.

Lmao, Russia the best!! You swallowed too propaganda yourself! Selling your scrap to 3rd world countries because your broke

Not everyone is as dumb? Apparently they are….

The Russian air force is struggling to deal with the conditions in Syria, but that doesn’t mean it has affected their efforts there. Basically the air craft need more maintenance and therefore about a third of planes at any one time are being maintained by ground crew. That still leaves plenty of perfectly good aeroplanes to blow shit up.

-How do you sink a Russian ship?
-Deploy it on water.

Ocean is just as reliable

Paul, I read the same thing…

The RAF engineer designed that ramp

Was an opportunity lost for a scrap metal merchant, to, throw a line to it and claim Salvage.

Hey Russia, you’ve done a great job of pummeling the FSA, can you help us with ISIS now?
Um yeah nah, about that…

Blimey, she’s only just come out of refit, this wouldn’t happen to be an old story?

well …. just in case no one noticed, the film is russian and since they are very aware of publishing “bad news” I went to my friend Google Translator to find out what the description of the video says …. and SURPRISE! this video is from 2012 before the mid-life overhaul. I’ve worked on fomer soviet machinery and those 70’s designed “automatic” high-pressure boilers were a real mess to fix up, Sovremenny class destroyers and even Kuznetsov’s sister, Liaoning all suffer from this unreliable boiler design.

Cheap sensationalistic journalism is cheap. This video is 3-years old. Next time, Mr. Allison, try to translate the description to the video you’re based on, at least with a Google Translate. It will help you much to not to look like a not very smart but very ignorant amatuer.

And yeah, technical problems is something unheard of, as well.

Silly me, next time I’ll bring my articles by you.

Better this, than act like a cheap clickbait tabloid.

But may be i’m expecting too much from the second-quality military web-site? You’re not Jane’s, after all.

Actually, the article only tells this happened, not when this happened. So, a perfectly good piece of information. For your next aircraft carrier, if you can ever afford one, consider buying engines from abroad. Oh but you cannot because of the western embargo. Back to rowing boats, perhaps?

Breaking down in a storm in. 40 year old tub, seems better than running aground in a brand new sub.

Ex-Cannon class destroyer escort with the Philippine Navy. Still patrolling as a frigate. Circa 1944. 71 years and counting. Is being refurbished and may celebrate its centennial birthday soon.

Why don’t they place a landing deck on the tug and call it a through deck tug!

[…] Aircraft-carrier Admiral Kuznetsov towed to base after taking storm […]

I’m more curious whether the carrier can reach the Syrian coast. It has a bad breaking habit of breaking down, especially on bad weather. https://ukdefencejournal.org.uk/russian-aircraft-carrier-towed-home-after-break-down/