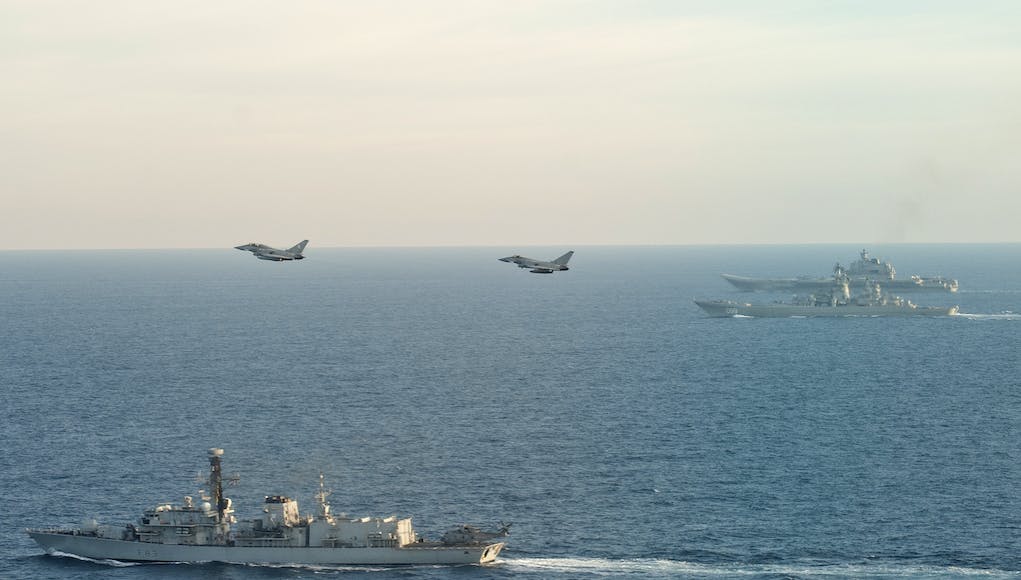 Russian carrier Admiral Kuznetsov has been labelled a ‘ship of shame’ by Defence Secretary Michael Fallon for its role in Russian military activities in Syria.

It is also understood that one of the reasons the carrier is returning home from Syria is the vessels inability to safely operate aircraft.

“We are keeping a close eye on the Admiral Kuznetsov as it skulks back to Russia; a ship of shame whose mission has only extended the suffering of the Syrian people.

We are man-marking these vessels every step of the way around the UK as part of our steadfast commitment to keep Britain safe.”

On this occasion, RAF Typhoon were also launched to monitor the Russian warships as they transit near to UK waters in order to ‘ensure that their activity is monitored and executed safely in accordance with international procedures’.

It is understood that one of the reasons the Russian carrier Admiral Kuznetsoz is returning home from Syria is the vessels inability to safely operate aircraft.

Following two incidents, the Kuznetsovs air wing was transferred to shore at Khmeimim Air Base near Latakia to continue military operations.

In November a MiG-29K crashed in to the sea while trying to land on the carrier, according to Russian officials the crash was a result of technical malfunction but it was later revealed that the jet had run out of fuel waiting to land while the crew was attempting to repair an arresting wire that broke. In early December an Su-33 crashed into the sea after attempting to land on the carrier. According to a Russian report, the jet crashed at its second attempt to land on the aircraft carrier in good weather conditions. Initially it was suspected that the jet missed the wires and failed to go around, falling short of the bow of the warship, but later it was revealed that the arresting cable failed to hold the aircraft, and was damaged in the attempt.

It was reported that Russia is to withdraw forces from Syria, with its aircraft carrier the first to leave says the chief of the Russian armed forces.

“The Russian defence ministry is beginning to reduce its armed forces deployment in Syria.”

That is a stupid, insulting and frankly hypocritical comment. We are selves have been involved in many controversial conflicts are selves such as Iraq, Afghanistan and even are own bombing campaign against ISIS. So on what grounds can that man judge that ship and more importantly it’s crew. I shore bet he wouldn’t be to pleased if one of are vessels was labelled a “ship of shame”.

Correct me if I’m wrong, but I don’t think the British were mercilessly bombing innocent civilians in their campaign.

A no but civilians have been killed by mistake by British forces and B it’s all point of view, I’m shore the Russians don’t see it as that.

Yeah i have rather bad dislexia and dyspraxia so my spelling is shit.

Hi Harry – no harm intended; I apologise if I offended you.

Given we have no air launched ASM, it’s interesting to see Typhoons shadowing the Russian carrier group. I doubt the Russian Captain even noticed…..

David, he wouldn’t be doing his job if he wasn’t aware of other nations aircraft so that’s a bit silly. An RAF 2000lb laser guided bomb dropped on a ship might ruin a captains day as well.

RN frigate to watch the carrier plus typhoons to keep a watch over the carriers aircraft, just saying…

David you should not be so pessimistic

looks klike R.N.did almost a fleet review with all our mighty fleet in one place at once

Basically they are there to make a point, British air power.. Why not!

I was just kidding you David about being pessimistic ?

It’s not old Ruskie ships in the channel we need to worry about, it’s their subs…

Russians would have us by the short and Curlys right now if push came to shove so let’s shut up. We’ve allowed too many cuts to defence and will pay a heavy price in near future until we can re assert ourselves as a country with a moral voice. Currently, no one is listening or interested in what we think of Russians frankly.

are those the fancy sandwiches? never mind when we recommission the trafalgars and swiftsures in mothballswe’ll have enough to deter them

Bold move deploying 3/4s of all available Typhoons for this escort mission!

I think the Admiral Kuznetsov should also be called the joke aircraft carrier of the century. What sort of credible statement does Putin think he’s making with a ship that trails a huge pall of smoke behind it, and has to have a tow ship in constant attendance for when it breaks down with monotonous regularity? An aircraft carrier that cannot reliably launch or retrieve aircraft​ and has to send them ashore to operate. A regular Russian dad’s navy.

What witless wonder in the MoD’s PR department came up with that rubbish?

And then wasted the RAF’s time sending out 3 Typhoons just to get a pretty picture.

In other news, the MoD has to make 6 billion cuts…