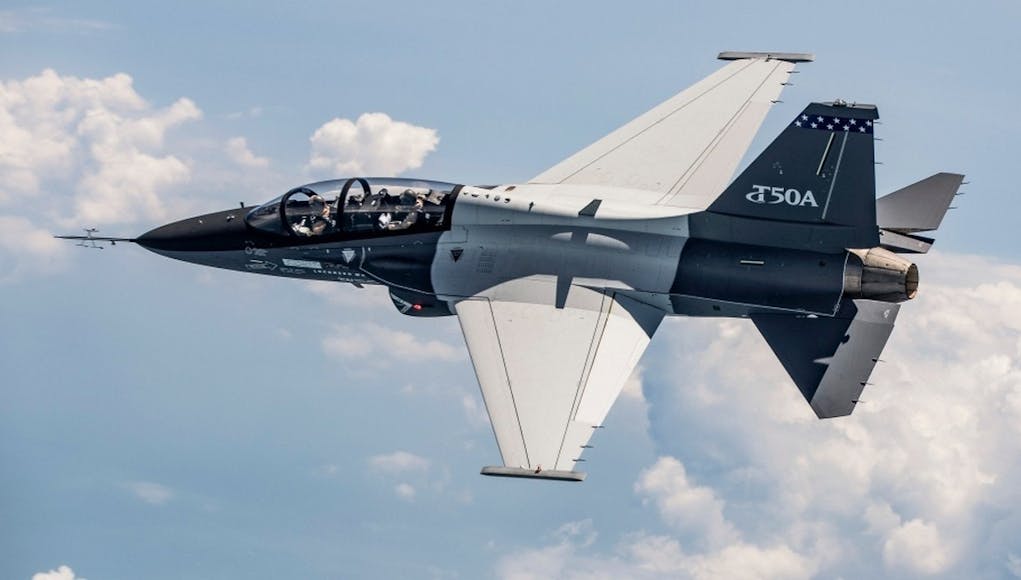 The T-50A is the company’s aircraft offering in the U.S. Air Force’s Advanced Pilot Training competition.

“We now have two aircraft in flight test proving our upgrade, and we’re nearing completion of our assembly and training operations centre in Greenville, South Carolina. We’re on track to provide the U.S. Air Force with a production line and training capability on day one of contract award.”

Lockheed Martin say that the T-50A is low risk, ready now and builds on the proven heritage of the T-50 with more than 100 T-50s flying today—100,000 flight hours and counting—and more than 1,000 pilots trained.

The T-50 Golden Eagle is a family of South Korean supersonic advanced trainers and light combat aircraft, developed by Korea Aerospace Industries with Lockheed Martin. The T-50 is South Korea’s first indigenous supersonic aircraft and one of the world’s few supersonic trainers.

Development began in the late 1990s, and its maiden flight occurred in 2002. The aircraft entered active service with the Republic of Korea Air Force in 2005.

The T-50 has been further developed into aerobatic and combat variants, namely T-50B, TA-50, and FA-50. The F-50 single-seat multirole fighter variant was considered. The T-50B serves with the South Korean air force’s aerobatics team. The TA-50 light attack variant has been ordered by Indonesia. The Philippines ordered 12 units of the FA-50 variant. The T-50 is also being marketed as a candidate for the United States Air Force’s next-generation T-X trainer programme. Thailand ordered 4 units of the T-50 advanced trainer variant.

The company claim that the T-50A is the only offering that meets all Advanced Pilot Training requirements and can deliver those capabilities on schedule at the lowest risk to the customer. Lockheed Martin teams studied clean-sheet alternatives and determined they pose prohibitive risk to APT cost and schedule requirements.

Taiwan is also looking to replace its current fleet of AT-3 jet trainers and F-5 LIFT planes with 66 advanced trainers, the Taiwanese Air Force released an Request for Information and two companies have responded including Lockheed Martin for the T-50 and Alenia Aermacchi’s M-346 responded to the request.

Rick Jose ??? oh dear . So far we have painted a yellow line on the floor from the hangar door to the airfield ?? i think we are a little behind