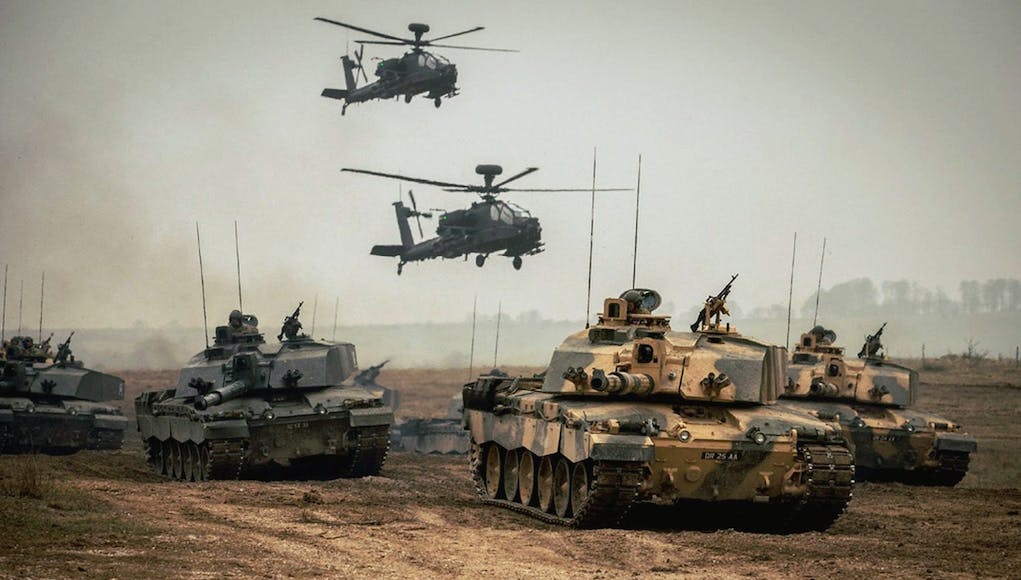 Leonardo has been selected by the UK Government to lead a team of UK companies for project Icarus.

Under a Technology Demonstrator Programme (TDP) called ‘Icarus’, the team will develop and demonstrate a way to affordably integrate technologies in a category known as ‘Active Protection Systems’ (APS), preparing them for deployment across the Army’s fleet of land vehicles.

“The project is responding to an operational environment where armour by itself will not be sufficient to defend against the capabilities of future weapon systems, in particular threats such as Rocket Propelled Grenades (RPGs) and Anti-Tank Guided Weapons (ATGW).

In order to counter this growing threat, a number of Active Protection Systems (APS) technologies have been developed by industry and are available as off-the-shelf solutions to supplement the physical protection that is offered by an armoured vehicle.”

These APS technologies generally fall into either of two categories: ‘soft’ APS solutions that are focused on early threat detection and which attempt to disrupt, decoy or spoof the incoming threat and ‘hard’ APS systems that seek to defeat the incoming weapon system by physically intercepting it, known in military terminology as a ‘kinetic effect’.

Whilst these APS technologies are currently available and will continue to be developed by industry, it is clear that no single solution is suited to every threat scenario or indeed all threats.

The key challenge say the MoD is to be able to rapidly and affordably tailor a vehicle’s combination of APS technologies to optimise survivability prior to, or during, deployment.

“The Defence Science and Technology Laboratory (Dstl) has placed a contract with Leonardo to improve the survivability and protection of Land Armoured Vehicles through Active Protection System (APS) technology. APS can detect and defeat threat missiles within 100 milliseconds, which is less time than half the time it takes a human to react to a visual cue.

The MIPS Electronic Architecture will provide a common infrastructure that will deliver UK operational sovereignty and enable “best of breed” commercial off the shelf APS sensors and countermeasures to be selected, integrated and deployed to defeat a wide range of current and future battlefield threats. This will enable the provision of a weight-efficient and affordable protection system capability that can be tailored to protect military vehicles against threats such as Rocket Propelled Grenades (RPGs) and Anti-Tank Guided Weapons (ATGWs) thereby helping to protect the lives of the UK Armed Forces.”

“By equipping land vehicles with a sustainable and effective active protection capability we will enable mission success to be achieved in ever-more challenging environments.”

“The MIPS electronic architecture to be developed under the Icarus TDP will enhance survivability across the UK Land Armoured Vehicle fleet by allowing vehicles to be rapidly tailored to counter threats in specific operational scenarios. We look forward to working with Dstl, our team members, and APS equipment vendors to deliver a future operational advantage to the British Army that will both save lives and protect equipment.”

Does the British government have any holding in Leonardo at all? BAE really did sell their crown jewels when they sold off their holdings in Airbus and Marconi, what is to stop Leonardo taking all of the uk intellectual property and uk money for developing these systems then manufacturing all of their export orders in Italy?
There are so many joint European initiatives now that the UK is the largest customer for but the bulk of the work still appears to take place in either France or Italy.

What do you expect? In Europes eyes it’s the British vs us and it was like this long before Brexit. They will always close ranks to favour each other.

That would depend on the contract which could easily give any intellectual property to the MOD. This article (http://www.defensenews.com/digital-show-dailies/dsei/2017/09/14/leonardo-to-lead-demo-of-mips-for-british-army/) talks about developing a “UK sovereign capability” which to me means the UK would own the IP.
But, hey, just cos it could easily be done doesn’t meant the MOD have managed it…

I read about this the other month. The thing is for some very strange reason the MOD are going down the soft-kill route rather than hard kill. As is whitehalls way in which to waste money, they are going to hand over millions to a foreign company to look into ways of duplicating what countries have already done in the field of Hard kill APS systems. If anybody from whitehall is reading this, do a google on Hardkill APS overview Go to the below the turret ring blog site and save the British Tax payers millions by reading it and… Read more »

Do a google on
QinetiQ to test MUSS APS for British Army
in which to find the story on the British army going down the soft kill APS route.

1,000 soldiers from the UK and 37 nations join Exercise Cambrian...