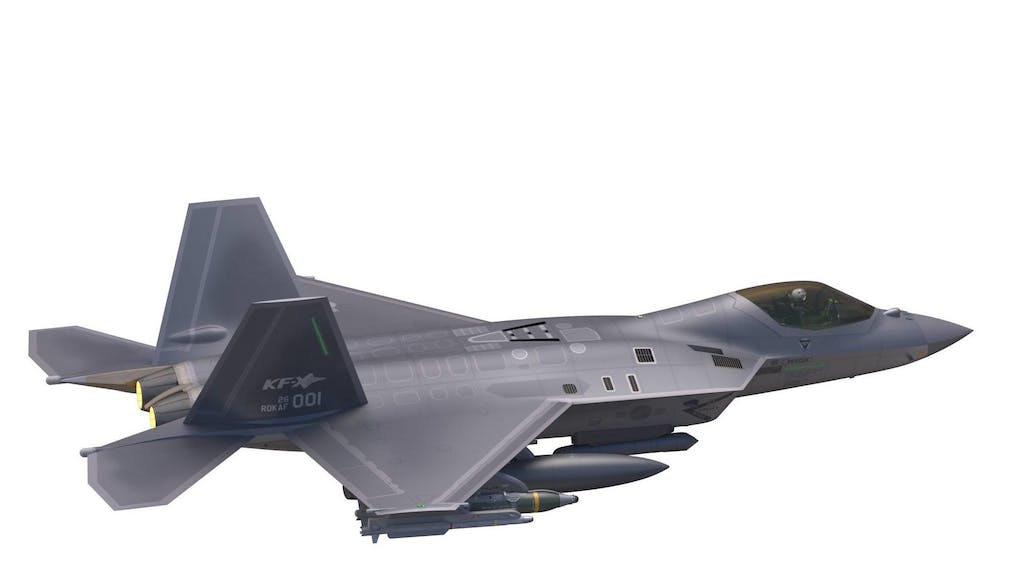 South Korea is starting production for its new cutting-edge stealth jet known as the KFX.

The design for the KFX, which stands for Korean Fighter Experimental, is the result of almost two decades of planning that cost the government approximately 8.6 trillion won ($7 billion).

Once production begins on 120 units of the new jet, local media reports that an additional 10 trillion won will be needed, putting the bill for the entire project at around 18.6 trillion won.

Production of a prototype model begins this month.

According to Ryu Kwang-soo, head business manager of the KFX project at Korea Aerospace Industries (KAI) – the project’s main developer, around 9,300 out of the approximately 12,000 detailed blueprints needed for the KFX project are complete – 78 percent of the project, including key components.

As a major national project, development for the KFX was led by the government’s Agency for Defense Development (ADD) and KAI, but approximately 225 private firms also partook in the process, including all of the country’s major defense contractors. Foreign stakeholders in the project include Indonesian Aerospace and the U.S. company Lockheed Martin, which provided technical assistance and several pieces of technology integral to the jet’s development.

They have spent $7bn planning without producing a prototype and they think they will produce 120 for just over $8bn. Sounds like the Koreans are being overly optimistic.

Yes that’s a staggering amount of money by anyones standards,in terms of sustaining and promoting ones own Aviation Industry it makes sense but when there are existing designs that will perform the same job and can be bought off the shelf for much less its hard to work out the reasoning.

If South Korea can do it why can’t we. South Korea has a huge army, builds its own tanks and has loads of warships, fair play to them.

They don’t have nukes. So I suppose that’s one reason.

Because it’s not a vote winner, in the UK defence comes low on the priority list, way, way down….

Now, if your nearest neighbour was as bark at the moon mad (and heavily armed) as Lil Kim, then it might be a vote winner!

Actually that does sound like Macron you’re describing there!! ?

Good point Sean, looks like the EU bun fight is heating up rapidly, so perhaps we do need to rearm!

We don’t want to be caught out in an Irish Republic/ French pincer movement on November 1st…..

No worries:-
• I’m sure we can handle the Irish Army Marching Band and the Irish Hot Air Balloon Squadron
• 1st is November is a Friday, so even if the French attack at dawn they’ll knock-off a lunchtime to start their weekend.

And with their excellent food, who can blame them.

I’ll bet French paratroopers have Michelin Star food supplied directly to the Drop Zone, with a wide choice of mains … And not forgetting the cheese course.

So, with that key weakness established, the stay behind auxiliaries first target, will be to blow up the French drop zone field kitchens in Kent … They will soon loose the will to fight after being forced to use our greasy spoons during the advice on London.

Bombard French airfields with black-pudding, tripe and haggis and I suspect the French paratroops won’t even bother boarding their planes – or is it just plane at the moment?

And I thought Corbyns defence plan was top secret.

As long as they have time to drop the croissant ? before their strategic withdrawal then bring it on

You beat me to it. A century ago indeed that would have been the standard view??=?

Aye, the South Koreans have a bit of an incentive to have a healthy arms industry. While I guess ‘normal service will be resumed’ once The Donald has had his moment and US foreign policy will go back to a more predictable level, it must be a concern for a lot of countries that they might not be as supportive on a whim.

Fair play to them I guess, there’s money to be made if they export their arms too of course.

we don’t have a land border with a country that wants to annihilate us. but id still like to see more investment

Tell that to the Anglo Saxons who had they not won a crucial battle around 8th century against the combined Irish/Scottish/Welsh hoards we would now be walking around in skirts, wearing blew eye makeup, playing bagpipes, drinking hopless beer eating haggis and smelling of leeks. Oh and supporting useless football teams, though no change there for me.

We do David, we have 2 in fact, called SNP voting Scotland and the federated EU republic lapdog of Ireland, both hate the UK and see Brexit as an ideal opportunity to push their nationalistic agendas. One Ireland, mandated by UK leaving EU treaty, with no rights or democracy for the people of northern Ireland, who are British not Irish citizens. No! Cannot ever be allowed to happen. Peace on the islands is not dependent on Brexit, if there is a return to the troubles it will have been engineered by our friends and allies in the EU and republic… Read more »

We do, we are building Typhoon, Hawk, 40% of Gripen E, 20% of F-35 and 20% all Airbus A200, 300, 400M, 500 and 800 models, Merlin, Wildcat, A189 and Tempest remember, not to mention Rolls Royce engines, BAe and Leonardo avionics, MBDA and Raytheon missiles, MB ejector seats, Cobham refuelling gear and lots of other aviation paraphernalia. Ok South Korea are better at land platforms than us – but they have a much larger army and bigger automotive industry. South Korea also has a large land border with a madman brandishing nuclear ballistic missiles behind it who is socializing with… Read more »

I think a plane with the ease of maintenance and low flight hour cost of an F/A18, the air defence capability of an F22 and the sensor fusion of an F35 would be pretty awesome actually…

From a design perspective it’s nice to see other types of aircraft being built, rather than everyone just operating the same thing! (albeit there’s a lot of subtle nods to Lockheed, there) And it will be interesting to watch how they get on, as they are presumably a bit further down the road with the KFX than we are with Tempest. I know BAES is at the heart of the JSF programme, but it’s good to analyse how an indigenous aircraft production line proceeds, what hurdles (technical, financial, political etc) come up and how they are negotiated. I do hope… Read more »

“I’m also curious as to why the KFA doesn’t feature a full bubble canopy” From what I understand about the F-35 and even the Typhoon (I may be wrong about the Typhoon’s capabilities) is that with Helmet Mounted Displays (HMDs) the need for a bubble canopy has been reduced. With a HMD, the “blindspots” are eliminated by a virtual display of the surroundings. This is apparently from other sensors on the aircraft that allow a realtime virtual view of the world around it. Literally, that means that a pilot in a F-35 can look through the floor of the fighter… Read more »

Thanks for your response, Rokuth, I wondered if that might be the case

I am struggling to see the advances that this aircraft brings over say an F16. Aerodynamically the wing planform is more akin to a F18 rather than a F35 or F22. The F22 and the F35 use a close coupled main plane and tail plane. This is to give it a very high pitch rate which when married with the inherent instability allows the aircraft to turn very quickly. Having close coupled wings also helps to minimise wave drag at supersonic speeds. The KFX in these pictures does not show that. It has a lot of separation between the main… Read more »

Surely all that external ordinance negates a whole lot of stealth?

But it looks more aggressive with weapons visible, and I suppose from a marketing perspective it shows that it can do multirole. In clean formation it just looks like a prototype, even if it would theoretically be more potent with just internal ordinance carried…

F-35 can hang a whole lot of extra ordnance off it too in non-stealth mode – stealth is not always needed, depends on the quality of air defences.