The firm say that the StormBreaker tri-mode seeker uses imaging infrared and millimeter wave radar in its normal mode to give pilots the ability to destroy moving targets, even in adverse weather, from standoff ranges.

Additionally, the weapon can use its semi-active laser guidance to hit targets.

“With its tri-mode seeker and datalink, this smart weapon will close a capability gap and make adverse weather irrelevant.”

Operational testing is complete, and early stages of StormBreaker integration work are underway.

The company describe the system as follows on their website:

“The weapon can fly more than 45 miles to strike mobile targets, reducing the amount of time that aircrews’ spend in harm’s way. Its small size enables the use of fewer aircraft to take out the same number of targets as previous, larger weapons that required multiple jets. The StormBreaker’s size has broader implications for the warfighter and taxpayers, as it means fewer attacks with less time spent flying dangerous missions.”

The US Air Force and US Navy have begun StormBreaker smart weapon integration activities on the F-35 Joint Strike Fighter and the F/A-18E/F Super Hornet aircraft.

Raytheon completed development and integration on the F-15E Strike Eagle in April 2018.

Shows how far ahead brimstone and SPEAR is , even the US lacks the capability until now.

I didn’t know SPEAR was operational? Also the Joint Air-to-Ground Missile that is replacing the Hellfire, Maverick, ect is now in production and it’s even more advanced that the Brimstone 2.

Spear is in testing just like SDBII. But being powered it is a little different. The SDBII competitor will be Spear Glide, which will do away with the propulsion to field a larger warhead. Spear EW is also on the way. But the JAGM is not more advanced than Brimstone 2. No tri-mode seeker, ‘just’ MMW and SAL like Brimstone. There are still no funded plans to field JAGM on fast air either, so it will be rotary wing and low speed fixed wing only. It also lacks the range that Brimstone has. Plus…. Brimstone 3 has is almost finished… Read more »

Forged from the heart of a dying star

Thanos should be worried by this…

Hopefully it will aim for the head….

Isn’t this Brimstone by any other name? If so why aren’t the US buying it? Because they are protecting their industrial base, which is something that our politicians are so very good at…….

Not really. It’s about twice the weight and is unpowered. Think of it as a cross between SDB1 and Brimstone. The UK will have Spear, which will have greater range, but smaller warhead. Plus Spear Glide which will be pretty much exactly the same as SDB2 (aka Stormbreaker). 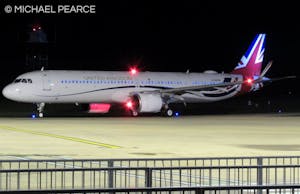