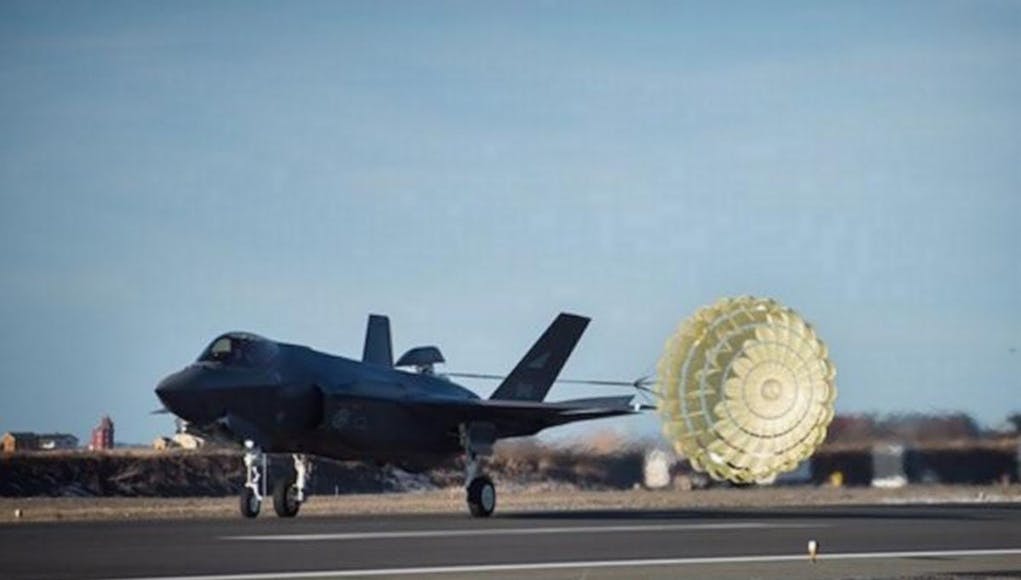 Norway has completed a successful verification of the F-35 drag chute system at Ørland Air Force Base.

Receiving the first three aircraft in November 2017 was a major milestone for Norway say Lockheed Martin.

Through the verification of the production version of the drag chute on our production model of the F-35, the weapons system is expected to fully qualify for arctic conditions this spring, says Major General Morten Klever, Program Director for the F-35 program in Norway’s Ministry of Defence.

The chute — unique to the Norwegian aircraft — is housed under a small fairing on the upper rear fuselage between the vertical tails. It is being added in order to rapidly decelerate Royal Norwegian Air Force F-35s after landing on the country’s icy runways when there are challenging wind conditions. Other country’s may adopt the system.

“Lockheed Martin is pleased with the successful first-time deployment of the drag-chute system on an operational RNoAF F-35A in Norway. This effort is the culmination of many years of design, testing, production and sustainment of the system by Lockheed Martin, and the US and Norwegian governments,” said Art Sheridan, Lockheed Martin Drag Chute System Program Manager.

Sheridan also noted that the first drag-chute deployment on an icy runway was accomplished on the same day by the F-35 Integrated Test Force at Eielson AFB, Alaska.

The Royal Norwegian Air Force had three aircraft delivered to Norway, Ørland in November 2017. From 2018, Norway will receive six aircraft annually up until, and including, 2024.

It’s great seeing F35 tested in lots of different environments and by differing air forces. what a way to get it into service

Considering testing. Will F35 go for testing to Boscombe down like all other British aircraft of the past? I’m only an hour away would love to see them from there.