Home Air Syria: Half of German Tornado fleet ‘not airworthy’ 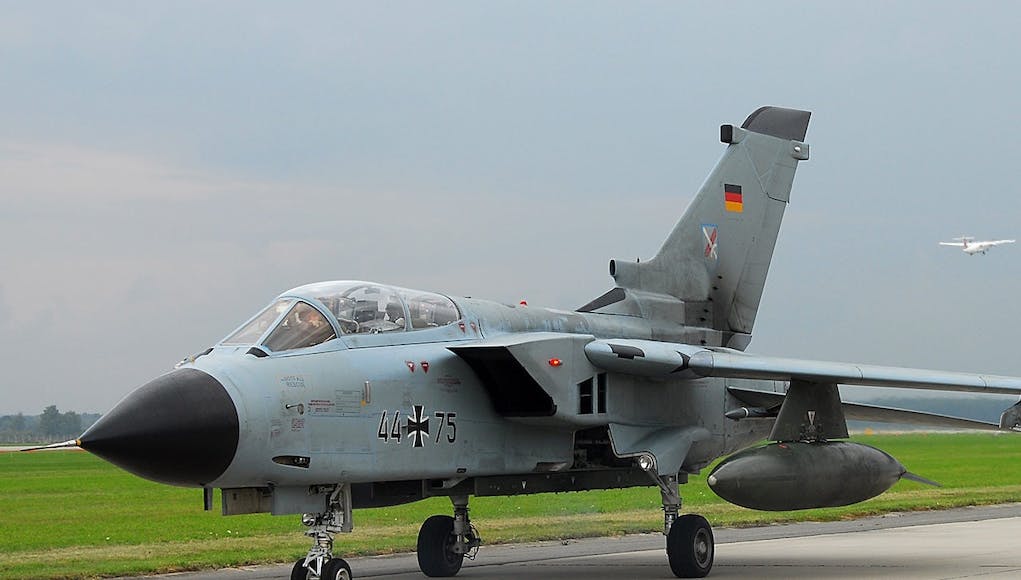 Only 29 of Germany’s 66 Tornado jets are airworthy, a defence ministry report has revealed.

Defence Minister Ursula von der Leyen has stressed that only six of the operational Tornado jets would be needed for the proposed German mission in Syria.

“The state of our flying systems remains unsatisfactory”

A defence ministry report obtained by German media blamed the problem on the “lack of availability of various spare parts”.

The readiness of Germany’s armed forces has long been the subject of criticism. Technical problems grounded German military aircraft delivering weapons to Kurds fighting IS in northern Iraq and medical aid to West Africa during the Ebola outbreak.

Defence cuts announced in March 2003 resulted in the decision to retire 90 Tornados from Luftwaffe service. This led to a reduction in its Tornado strength to four wings by September 2005.

In January 2004, the then German Defence Minister Peter Struck announced further major changes to the German armed forces. A major part of this announcement is the plan to cut the German fighter fleet from 426 in early 2004 to 265 by 2015.

The German Tornado force was reduced to 85, with the type expected to remain in service with the Luftwaffe until 2020.

The aircraft being retained have been undergoing a service life extension programme. Aircrew training takes place at Fliegerisches Ausbildungszentrum der Luftwaffe, based on Holloman Air Force Base in New Mexico, US.

They’ve never had to do anything, is it any wonder?

Nothing unusual there then,

But have had a fraction of the use….

The last of ours were built in 1998 I think, they’re not that old compared to other defence equipment and the avionics an weapons are constantly updated. The Germans have never deployed anywhere since the 40s.

Still the best value jet the RAF has ever purchased….It will be missed and deserves its place in history.

The Panavia Tornado and its variants have been an outstanding workhorse for the RAF. One the best multirole strike aircraft ever built. But like all electromechanical things, if you don’t look after it, it won’t return the favour.

Germany deployed to Afghanistan for a start

The Tornado is not multirole. The GR4 is an interdictor strike aircraft

Dave…Why? What difference would it have made. We had to make cuts and the Tornado is a far more versatile weapons delivery platform.

It is more costly to run and while as a platform it can hold more weaponry you need friendly airfields to fly from – the harrier was carrier borne – I ran the official numbers for an MA thesis a few years back – the Libya campaign was 3 times more costly than it needed to be, and nearly 40% of all the sorties launched were by a single French carrier, both aircraft were sufficient to the task but the Tornado was kept – I’d argue because the Navy were a bit wet when arguing their corner and the RAF… Read more »

The Luftwaffe also have the Euro Fighter so they are by no means under equipped to defend their skies. I never saw the logic in scrapping our carrier based Harrier force a good 15 years before the full introduction of its successor. But maybe the powers that be know something we don’t. F35 will be well worth the wait despite what the doomsayers and armchair Generals say. Its the love child of a Harrier and an F22.

The Tornado aircraft platform as a whole IS multirole as there are three primary variants: Tornado IDS (interdictor,strike)Tornado ECR (electronic combat,reconnaissance) and Tornado ADV (air defence variant) interceptor aircraft. They are multiroles. I repaired them for 20 years.

Yes yes I agree the tornado is a versatile airframe it’s bigger and had millions spent on converting it to a fighter variant etc, but it is inherently limited by being lame based, as I said, I feel the Harrier flown by the RAF or the RN) of a carrier would have been better until the F35 came along – what use would a tornado be in a Falklands style war?

At lest we arse still work

well some of them

Interesting how we Brits do most of the fighting, yet the Germans do very little but they lead Europe! why is that?

All those generous social programs at home and bailing out the rest of Eurozone economies comes at a price, their national defense, which they pass on to the US and the U.K.

You better think before you laugh…: http://www.independent.co.uk/news/uk/home-news/french-patrol-plane-aids-uk-search-for-russian-submarine-detected-off-scottish-coast-a6744171.html

Can they use there typhoons like we are or they limited to air to air sorties at moment?

They’re limited to reconnaissance just now. Everyone gets twitchy at the thought of Germany in action abroad.

We all knew that…

Read that they have 96 tornado’s and only 33 airworthy

Germany is not allowed to build their own weapons. If they are allowed, their weapons will be almost as good as those of Americans, just like what happened during WW2. This is especially in terms of aerial weapons.

So what’s the Leopard then?

The German approach to defence is typical of the cosy left wing perspective of most EU governments that somehow the world has evolved beyond war. There is a political reflex in these countries which makes then reluctant to spend even the minimum on defence. This is both a naive and criminally incompetent approach to foreign affairs. There is no guarantee that the world we live in based on international law will last. In fact the only reason this environment exists is because it was paid for out of the blood of British and American servicemen. In my view the current… Read more »

I wonder what percentage of our 98 tornados are available for us.

From what I’ve read the UK is in a similar situation.

It’s the eventual fate of all combat aircraft to take on a ground attack role when they become passé. Some of these were shot down in the first Gulf War, so not without risk.

It does kind of raise the question of just how much of each countries on paper military hardware, is actually in a useable condition and actually works.

Wasn’t there the story of our tanks stored in Germany not being in usable condition also.

The Germans are planning on replacing these aircraft from the mid 2020s. They will be attempting to to find partners to develop a new combat aircraft next year.

Get some fokkers, No not those type of fokkers, I mean someone else’s ! 🙂