Home Air The Rise of the Drone Swarm 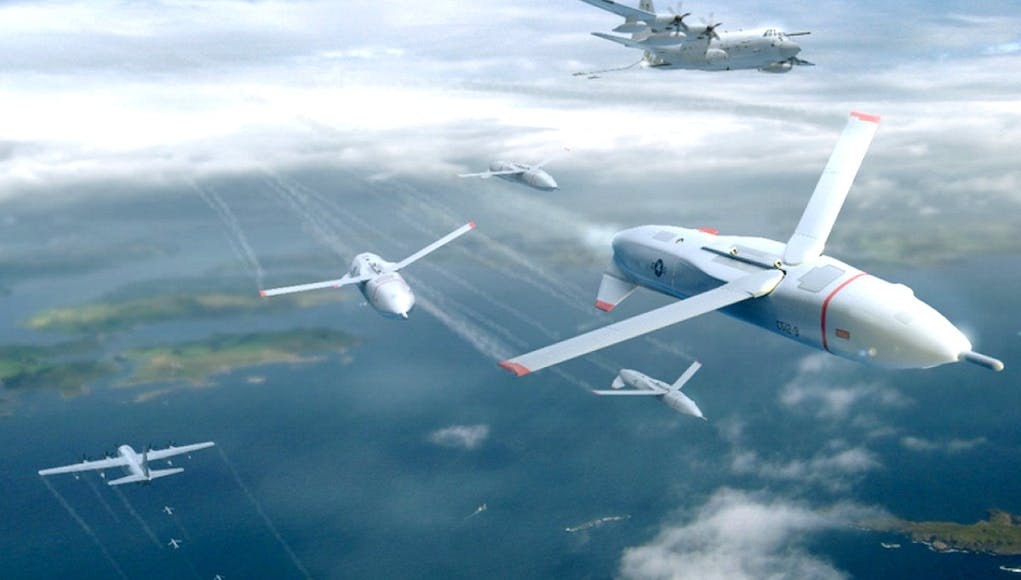 New technology is set to change how we utilise drones on the battleﬁeld.

This article was submitted to the UK Defence Journal by Jack Gimber. Jack is a recent graduate from an MSc in International Security from the University of Bristol, for which he was awarded a Distinction. His speciality is in China’s international relations but he has a passion for understanding all global security issues; situating them within their historical, political and geostrategic contexts.

The use of drones, or Unmanned Aerial Vehicles (UAV) in their current iterations have so far largely revolved around intelligence, surveillance, reconnaissance (ISR), and tactical strike capabilities. These systems have been predicated upon the need for continuous human control to not only pilot the craft, but also dictate how, when and what action the drone executes. While the need for human oversight into the actions of drones is required by US Defence policy, it is set to change in a dramatic way with the introduction of Swarm technology; which is currently under development.

While the role of drones may not be set to deviate from their current operational roles, the manner in which they achieve these ends, and the scope of what they are capable of, is set to evolve and broaden. Swarm technology enables a large number of drones to become highly interconnected, with the ability to eﬃciently plan and allocate mission objectives, make coordinated tactical decisions, and collaboratively react to a dynamic environment with minimal supervision whilst making recommendations to human operators. This inter connectivity with one another has led to many comparisons with the way bees and ants operate. Drone programs with insect related names such as the US ‘LOCUST’ program and the Russian ‘Repellent’ system reﬂect this characterisation.

The use of Swarm technology unshackles drone capabilities by diminishing the limitations of a one-pilot-one-drone dynamic, instead allowing for multiple assets to all be under the command of single human operator. This change allows for a broader range of operational capabilities, better scale-ability, favourable cost eﬃciency, whilst having many combat applications to air, ground and sea theatres. Once fully developed, Swarm technology will oﬀer an adaptable and malleable platform from which a commander can create the ideal combination of drone types to ﬁt the designated task at hand. This not only regards the size of the swarm, bigger not necessarily always being better, but also the internal make up of a swarm; which could consist of a variety of drones serving diﬀerent roles and operating in diﬀerent environments. Greater diversity in this regard would expand and strengthen a swarms capability for complex missions and targets.

This could mean ground or seafaring drones receiving guidance and intelligence from aerial drones, numerous smaller search drones could be used to ﬁnd targets for larger attack drones, or more dispensable drones could be used to absorb enemy ﬁre to protect other military assets. The race to develop this technology has been dominated by the US and China, both of which have successfully conducted demonstrations on swarm capabilities. In 2016, the US Defence Department dropped 103 Perdix micro-drones from three F/ A-18 Super Hornet jets. After being released, these drones displayed collective decision making, adaptive formation ﬂight, and self healing. China has successfully tested the largest single swarm to date, numbering 1000 individual but interconnected drones. China’s is purportedly exploring the potential to use such assets to target US aircraft carriers, which could eventually be used in conjunction with other more traditional attack craft to saturate a hard targets defence systems.

While Russian drone technology has trailed its Western and East Asian counterparts, there has been a recognition of the threat posed by advancements in Swarm technology, spurring an investment in anti-drone technology. Russia has developed programs such as ‘Repellent’, a mobile platform to suppress communications with obstruction and directional interference, whilst also disabling their controls. Russian progress in this area has been displayed in both Ukraine and Syria. Suspected Russian supplied jamming and hacking technology to separatist forces has denied Ukrainian forces the ability to use US supplied recon drones in the battleﬁeld. In Syria, Russian forces repelled what has been called the ﬁrst coordinated use of multiple drones in a ‘swarm’ formation attack. While it has been called a swarm, this is only true insofar as it employed multiple drone assets simultaneously in an attempt to saturate and overcome Russian defences. This is not to mean the highly sophisticated and integrated systems which are the focus here. Nevertheless, these examples highlight Russia’s engagement with Anti-Access Area Denial (A2AD) systems as a response to developments in drone warfare.

The US Defence Advanced Research Projects Agency’s (DARPA) collaborative operations in denied environment (CODE) program ran a simulation in which a drone swarm had to operate in an A2AD environment. Despite the swarms’ communication with a human supervisor being cut for an extended period, the group were still able to retain and execute mission objectives as planned. This means groups of drones would be able to operate in communication and GPS denied battle spaces, enabling military command to maintain, if only sporadically, oversight of a swarm to have it achieve its objectives. Once receiving a directive from mission command, the drones autonomously work together to navigate, locate and attack pre-planned and pop-up targets with only limited human direction.

Considerations Regarding the Dynamics of Warfare

While these developments in drone technology changes the nature of their use and capabilities, it may also result in changes in the rationalisation of conﬂict. Drones have seen an increase in use over the years due to their cost eﬀectiveness and in the elimination of danger to military operators.

These considerations drive down the political risk of deploying these kinds of forces, and Swarm technology may enhance these calculations. One risk is the proliferation of clandestine drone action around the world as more and more nations develop these systems, without international regulation being in place. Furthermore, the moral quandary raised by the increased automation of weapons of war should be considered.

While the CODE program attempts to enable as much human oversight of a swarm as possible, within an A2AD environment, a human operator with potentially only limited bursts of information may not be adequately informed to make decisions within a battleground situation. Under these circumstances, a human commander would have to rely heavily on the calculations of mechanical instruments when making decisions regarding the taking of human life.

Meanwhile, in Britain, one dipstick with an off the shelf drone causes days of disruption at one of the World’s busiest airports. I seriously lack confidence in our national defences.

You need to understand the difference between defence and public nuisance…

Tbf it’s still a relatively new technology for civilians to be able to have. I’ll ACTUALLY lose faith if after this wake up call they don’t require airports by law to have some sort of system to either catch or jam drones.

Those are both very difficult and very expensive things to implement. Not to say that I don’t think the major hubs should have the systems but they are probably not viable for smaller airports.

and worst of all, expenses eat profit….. up until the losses outweigh the gains….. don’t you just love capitalism? 😉

Pretty sure Sci Fi games and novals created the idea of drone swarms and named it such before Drones were even taken seriously as a feasible military asset.

In fact it’s interesting with the exsperimentaitons of Railguns how much military technology follow sci fi fictional weapons.

science fiction somehow has a way of becoming science fact…at least the good stuff does….. just look at lasers and railguns!

The communicator from Star Trek, as well as the needless syringe thing! to name a couple!

On future battle fields flesh will not stand much of a chance. If you’re not wearing an iron man outfit, a jager, or a personalised tank you’ll be toast.

I see human / animal analogues being an answer to fighting in the confines of cities before too long. I think non-state actors without access to similar will be on the back foot for decades. Think every time I see Asimo or one of those Boston Dynamic mules. Flying drones would fill niches because of ammunition, recoil, and the inability to sustain damage. If the first three ‘men’ through the door (or window, or wall, or floor) are bullet, fire, and shock proof the fight is won.

The original Brimstone missile had a swarming mode to prevent multiple missiles attacking the same target so nothing new.

Glass Half Full
Reply to  GWM

Any thoughts on Williamson’s drone swarms being based on the SPEAR 3 platform? There seem to be many reasons why this would make sense in terms of relatively quick to implement, relatively low cost and commonality of platform.

GWM
Reply to  Glass Half Full

It could be there’s so little real information it could be any thing, everything said so far is just speculation.MBDA have said there could be different versions of spear 3.There is a discussion on the Eurofighter site about spear 3 and Typhoon.

MOD has already confirmed that Williamson was lying. They are looking at imitating a tender process by the end of the year and this is based on LANCA program started a few years back.

If there is to be a rapid capability then it’s going to come from KRATOS and won’t be Taranis based or a British manufactured system. Great article form drive on it.

What is the reusable ratio of a swarm? Are they expendable similar to a cruise missile? I would assume, a percentage could fly to a pre-planned landing zone on land or ship?

It’s true, many look at drone swarms as being invincible when countered with the current generation of very expensive SAM missile. However we would likely see flak style systems and large scale EMP’s become popular to Attack swarms. EW will be even more important as a means to jam networked swarms.

There seems to be a blinkered view of operating UAVs in the autonomous mode of hunter killer. That is, operating with a man out of the loop to make a logic based decision to fire the weapon or not. Basically letting the UAV decide whether to kill or not. This must surely have legal ramifications, but as yet there are no legal conventions on how this will be controlled or used. At the moment anything goes, because everyone realizes how much swarm or autonomous technology will change how conflicts will be fought. The person with the best technology may be… Read more »

There was a story in one magazine of using the RAF Hercules as a mothership to release the drones near the target, supposedly in a safe area. The drones would complete their programmed mission and the survivors returned to the mothership, seems like a good idea.

Over 70 aircraft to engage in large scale ‘battle’ over North...