On Monday the 15th of October, two Tornado GR4s were tasked with the destruction of a terrorist observation post which had been identified to the south-east of Hajin.

A single Paveway IV guided bomb was released and this scored a direct hit on the observation post, destroying it.

I thought the Tornado was due to be retired in 2018. Has the date been pushed back?

Yeah a couple more years I think, but don’t be surprised if they keep them flying for longer, we only have 30 tornados these days though.

A quarter of a billion pounds destroying light armed and unarmored targets. I don’t understand the figures listed as it states number of air strikes 900 with 1276 (i think that should be sorties not strikes) in Syria, which doesn’t add up (how can the 2nd be higher), but assuming 1276 strikes, that’s 207k per strike. I suspect this type of warfare will be the future of warfare for many years to come, mainly due to lack of desire to commit ground forces to wars that can’t be won, and so we badly need to invest in some cheaper options… Read more »

Yeah drones, we need super long flight time drones,that’s the future, maybe even drone mother planes where the drones go to refuel and straight back on job. We still need pilots for this, but we dont need highly trained expensive pilots like for the f35.

We should have kept more than 30 tornado jets also as they are amazing proven assets for Syria and Iraq to fight Isis.

Obviously the job needed to be done but it doesn’t seem to be cost effective; wouldn’t a smaller lighter counter insurgent/ ground attack aircraft have been more appropriate?

2 squadrons left. One to stand down this month, the other to disband in march and with it the end of the tornado force. If there was a last minute reprieve, it would have been part of the £1BN announced this week. The supply contracts will expire very soon, it can’t soldier on without the supply chain.

An incredible aircraft and asset that has proved to be one of the best fighter-bombers of its era now comes to an end, but all things do eventually I guess.

Julian is right. The Tornado’s out of service date remains 31 March 2019. The drawdown will continue and there is no going back. On a positive note though, Project Centurion is on track for Typhoon to stand up with the capability we are losing with Tornado – brimstone, storm shadow, pave way. It will be a true swing role aircraft, with meteor AAM as well, and later e-scan radar, so even better. Tornado has been great, I love it, but it’s had its day.

The tornado is still a great weapons platform but it will go in 2019. I agree with previous comments though, how the hell do we manage to spend £265m on so little expended ordnance?? Bang for our buck or bang, there it goes?? 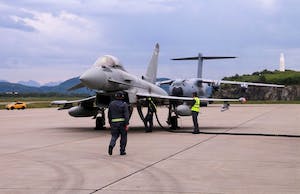