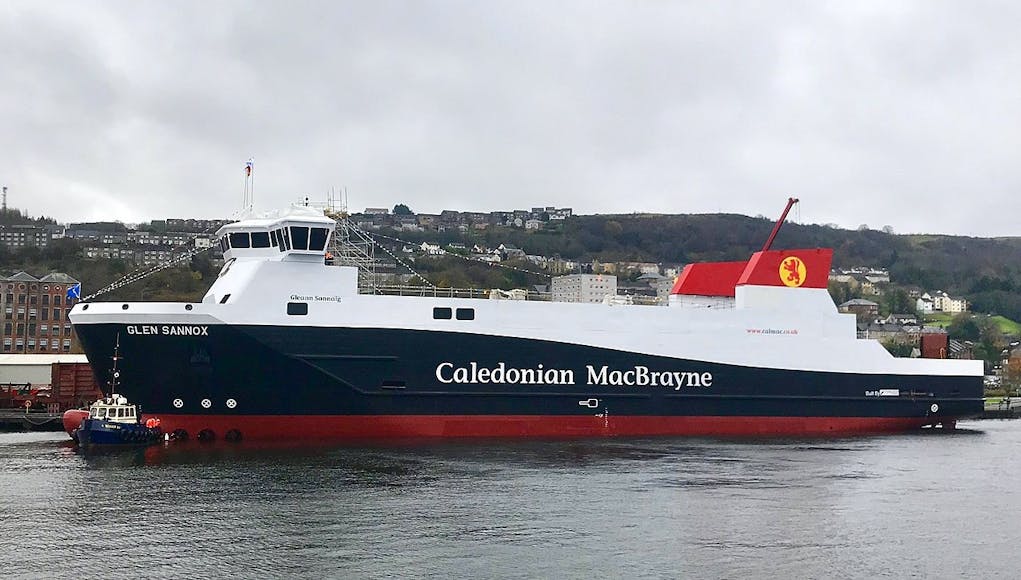 The MV Glen Sannox, currently four years behind schedule, has been moved down the Clyde to Greenock to rectify major build issues as part of a £400,000 contract.

Ferguson Marine Engineering had earlier joined a group of defence contractors bidding for the new £1.25 billion Type 31e general purpose light frigate programme, it remains to be seen if they still intend to take part.

The dry dock period is a major step in Ferguson’s revised programme to complete the two public sector vessels, say the firm.

“MV Glen Sannox requires a remediation package of work, including replacement of the bulbous bow, paint repair, removal of marine growth from the vessel hull, and other work. The repairs and rework were identified during the review of the condition of the two dual fuel vessels, conducted after the shipyard went into administration in August 2019, and are included in the programme review board report published in December 2019.”

The first steel for the troubled MV Glen Sannox was cut on the 7th April 2016 and Glen Sannox was launched on 21 November 2017 by the First Minister Nicola Sturgeon. In 2018, new Cabinet Secretary for Transport Michael Matheson said it had been confirmed that the ship was to be delivered in June 2019, followed by two months of crew familiarisation and sea trials. Further dispute over the contract overrun led to the shipyard going into administration and being nationalised by the Scottish Government. A report produced after nationalisation indicated that Glen Sannox should be handed over to CMAL in the last quarter of 2021 and that completing the two ferries is likely to increase the total cost to over £207M.

In 2020, Ferguson Marine contracted with International Contract Engineering, a marine design consultant, to revise the design and outfitting of Glen Sannox in advance of her eventual delivery.

She is scheduled to return to the Ferguson’s shipyard in Port Glasgow at the end of the month.

“This is a key milestone in the recovery programme for the dual fuel vessels.  Some work has been carried out on MV Glen Sannox at the shipyard, but the dry dock period is important because it will bring the vessel up to a condition that will allow us to move forward in earnest with the vessel completion plan.

It is also another clear sign of recovery for the shipyard business and comes only weeks after the launch of a steel barge for a customer in the offshore oil and marine sector. Obviously, the Covid-19 pandemic lockdown has impacted activity at the shipyard, but our workforce has been returning to outdoor working since the end of June and we are operating effectively with social distancing controls in place.”

Bloody heck! But Atleast the yards working again!, but why the hell do they need to replace the bulbous bow?, I can see marine growth removal and new paint but major steel work!!

Cam – The Bulbous Bow issue has been bought up on here before – basically it looks like something a First Year Apprentice knocked up in their Lunch Break.

Ah right Paul T, thanks for letting me know, I’m off to look at it now.

Jesus! What the hell! Who thought that was a good idea! Looks a mess! To be fair the rest of the ship looks great.

I’m afraid look at some other pictures, the windows are actually steel blanks painted black, she is suffering severe corrosion on many sections of hull inside and out due to multiple leaking rain water and improper application of corrosion protection. She has structural weakness in multiple areas due to ill advised cuts to the hull frames to make installing systems and pipes easier. Most of the pipework fitted has had to be removed, her main prop seals need completing replacing and probably the shafts as well. The steel plates that form her hull are showing signs of ‘Hungry Horse effect’… Read more »

Remind me again, who was the woman who launched this ship?

The face that launched a thousand quips…

Correct….only yard this should go to is the Knackers yard.

Good grief, that is a laundry list of problems and a half! How could they get this so wrong?

As a local boy, I see the current Isle of Arran Ferry nearly every day and this thing is about a quarter of the size. Its titchy and its a busy, busy route.

Is this replacing the Arran ferry?

Hopefully not — its far too small. During the summer if its very busy they press another ferry in to help out … so maybe its going to supplement the current ferry – which is much bigger.

The seas can get choppy if it is windy, wouldn’t like to be on it when the seas get up come the Winter.

Ferguson Marine is a small, modern shipyard that should have been ideally placed to react to this contract. Yes, it’s cutting edge i.e. the future of shipping, but it’s still a ferry, not a warship; and as Cam notes, the bow is just a piece of hull steel. How can it go so wrong? and have they convincingly learnt the basic lessons for any future orders?
On a related front, where’s Cammell’s RRS Sir David Attenborough?

Its perhaps not as cutting edge as we’re lead to believe. Wartsilla has been selling dual fuel engines since 2003.

Don’t doubt it for one moment, Expat – which hardly improves FM’s status.
Regards

I wouldn’t trust Ferguson with a meccano set. They should never be allowed anywhere near an MOD contract…ever. The average life of an underwater paint scheme is at least 5 years in water with some reaching out to 10 years. Yes moving through the water polishes the hull and removes marine growth but you can also remove it by using divers or robots. its a common enough evolution. If they are re-docking for a new bulbous bow and the paint scheme was Silicon based paint it will need a full re-blast and re-preserve. Its a nightmare to patch repair the… Read more »

The nationalisation was an act of desperation by the Scottish Parlie rather than some great master plan. This whole ferry thing has been an unmitigated disaster though. Its not had much mention up here in sunny Alba, plenty other distractions, be curious if it makes the news tonight.

Dreadful rail crash near Aberdeen will shove it out of the way. Sadly, it looks as if there may be significant casualties!

I was wondering why a couple rescue choppers flew over my house in That direction! I hope it’s not that serious…

Was speaking to a driver mate about it and she said the driver was dead. Not seeing that on the news yet but it looks a bad one. Hopefully still find some news time for SNP bashing over the results debacle and the ferries…..

Ah that sucks Andy P. No one deserves to die at work… RIP

Landslip. One of our nightmares when running water dislodges ballast.

Confirmed that 3 have died including the driver….was there an inspection after the heavy storm. Maybe this is another application for UAVs….cost effective safety monitoring?

Not always possible using P Way due to the distances, unless that is a known trouble spot. Too few P Way, too few S&T, too few MOMs.

Often a train running empty is used to examine.

Interestingly, NR were using a UAV at my location last year, but in a survey capacity not a safety inspection.

Scottish media suck up to SNP, they hate being crirical of Scotland, the “independent” inspector tasked by the SNP govt to look into what is widely known as the Scottish Exams fiasco is a pro (EU) SNP activist and avowed Boris hater. Go figure

All the parties do it TrevorH, they’re not going to appoint someone who’s going to turn round and give both barrels to the body that appointed them.

It will be interesting to see in the light of the ‘putting their hand up’ for the education debacle if they do the same with the ferries. Their prior stance suggests otherwise unfortunately.

The ship looks good and well built, apart from the obvious that is.

I don’t quite understand how a ferry project can go so awry? Shouldn’t it be a low risk endeavour?

There were snags with the ‘dual fuel’ stuff and then a shitfight about design changes which deteriorated into a ‘he said…. she said….’.

You’re right though Qbit, you’d think building a ferry would be relatively simple.

Initial independent project management might have helped. Probably still could; or come more to the fore in future

Curious as to what this has to do with defense?

It’s not often that a shipyard new to passenger ship building manages to establish itself in the sector. In Ferguson’s defence, it might be said that Meyer Weft in Germany and Meyer Turku Shipyard in Finland have both had problems with LNG- powered cruise ships, yet both are leading builders of cruise lines. This technology probably is on the complex side.

It’s been a disaster from the get go, the ranges these Ferries are expected to cover means there is 0 benefit to LNG so all the government did was increase risk and costs for 0 benefit so they could market their green credentials.

But thinking beyond the immediate contract in developing new technologies is what the UK has to succeed at if our industries are to survive. Not ‘retrench’, which we’re too inclined to do (BAe Hawk post 10th Aug). I give credit to the intent to avoid risk aversion, it’s the commission that was tiresomely at fault – perhaps a mindset rather than inevitable considering the investment in the yard? But we need to keep on keeping on – not with errors, but efficient coordination, etc.
Regards

Just don’t let them any where near the T31 program. It is a tight schedule as it is, where as the first will enter the fleet in 2027 which we all agree is a bit to long. It appears that all five will enter at about the same time 27-28. Out of interest how did the SNP manage to nationalise the yard, I thought that was against EU regulations.

All depends upon whether the nationalisation is viewed as illegal state aid.

This company how on earth can they be allowed to Tender for such an important RN contract. This is like giving a second command to the Captain of the Titanic.

🙂 but agree. Also the fact that this MV was launched by Nichola Sturgeon!!

The fact that Smith was given the Titanic confounded many at the time – he had form!

Hi Gavin – I think Captain Edward Smith was Commodore of the White Star line, so it was customary for him to take a new liner out on her maiden voyage.
But I agree, with the earlier collision between RMS Olympic and the RN cruiser Hawke – he did have form!

Sad to hear of the Aberdeen Rail crash and sympathies to the families of those who have died or been injured. On Subject, I see she is flying the Saltire from her bow. Each of the four Nations of course have their own flag in addition to the flags of the Union. There is a similar situation in the USA with the individual states but the Nationalists have used every opportunity not only to seperate Scotland from the Union in every aspect in infrastructure and symbolically but to flout the law in so doing. The vessel should fly the British… Read more »

Why is this defence related? Are these dual role ferries? 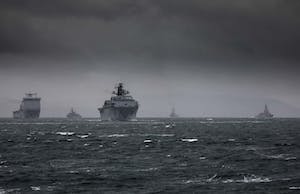