It has emerged that Typhoon jets went into combat earlier this month to assist Iraqi ground forces under fire from Islamic State.

The Ministry of Defence say that on Monday the 6th of September, Iraqi ground forces conducting security operations approximately thirty miles south of Erbil came under fire from a Daesh position in an area of heavy vegetation.

“Two RAF Typhoon FGR4s responded to a call for assistance and, working closely with the ground forces to ensure no risks were posed to either them or any civilians, used a single Paveway IV guided bomb to successfully eliminate the threat.”

Royal Air Force aircraft continue to fly armed reconnaissance missions as part of the coalition against Daesh to support the Iraqi Security Forces “keeping their country safe from Daesh terrorism”.

While British aircraft contiunue to patrol over Iraq, activity is less than it was in previous years. Back in January 2019, the number of airstrikes carried out in Iraq and Syria was described as “second only to the United States”. The operation is the most intense flying mission the RAF has undertaken in 25 years.

The most recent strike about which information has bene published happened on the 11th of May when Iraqi security forces encountered a group of Daesh terrorists in a strong defensive position some twenty five miles south west of Mosul.

“Coming under heavy small arms fire from the terrorists, the Iraqi troops requested air support from the global coalition, and a pair of Royal Air Force Typhoon FGR4s responded promptly. Liaising closely with the Iraqis, our aircraft attacked the Daesh terrorists with two Paveway IV precision guided bombs. The bombs hit the target and eliminated a number of the Daesh extremists. The Iraqi forces were then able to assault the position successfully and overwhelm the few remaining terrorists.”

US stands up first Europe-based F-35A squadron in UK

That’s a lot of hardware on the Typhoon in the headline picture!

It is certainly is an impressive loadout. I am struggling to think of any other western fighter type that can carry a similar warload – only the F-15E? Even Tornado could not approach that kind of load. I remember seeing a BAE demo at RIAT (2016?) of a similar loaded out Typhoon, I think it won an award for best display. And the weapon load did not seem to effect it’s performance in any way. An incredible fighter.

Rafale, Su-27 , all fighters with this configuration can have a similar load out.

The BBC news choose to ignore this story on the continuing presence of ISIS in IRAQ as they were busy interviewing that Baguin Bitch who wants to come back too Britain as an anti terrorist expert ? Thought had just been an ISIS Bride

20 Years Ahead Of Schedule, Why ‘Mighty’ Eurofighter Typhoons Are Being Retired By The Royal Air Force?
https://eurasiantimes.com/why-eurofighter-typhoons-are-being-retired-by-the-royal-air-force/

NAO REPORT: Also states which is interesting the Hawk T1s Typ Tr1s also due to the lack of suitable radars, NEED A E3 sentry to support them in Air to Air.

I hadn’t realised that cheers!

Yes the T1 don’t have radars but the multirole single seater Hawk 200 do and are equipped with a variant of the APG-66 normally found on F16 fighters. Hawk 200 were sold to Malaysia,Indonesia and Oman but not purchased by the RAF.

Its interesting and an indictment of the levels of corruption and incompetence in Iraq that the Iraqi air force that has F16 fighters and KAI T-50 jets cannot provide air support to their own troops on the ground. 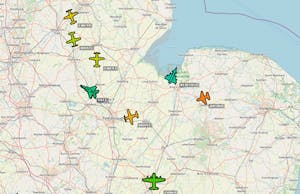 October 6, 2021
This week the panel discuss flight tracking and the tools they use to do it plus North Korea's recent missile tests and how diplomacy in the region is faring.