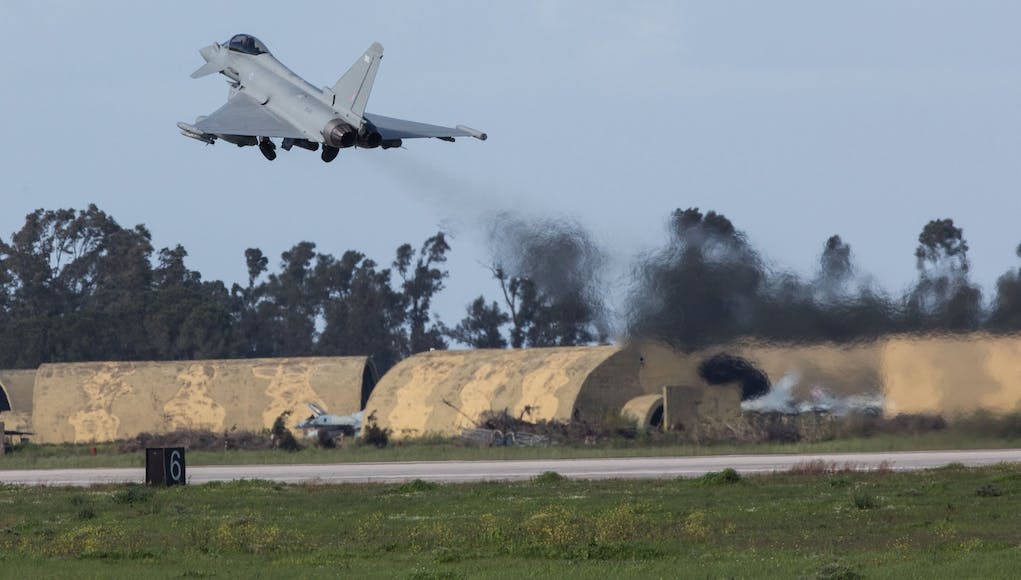 Typhoon jets are taking part in one of Europe’s biggest military air exercises to bolster NATO’s ability to respond to aggression, say the MoD.

Six jets from the Lincolnshire based 3 (Fighter) Squadron are in Greece to test their skills alongside the Hellenic Air Force and also pilots from America, Italy, and the United Arab Emirates.

It is the RAF’s first appearance at Exercise Iniochos and the Typhoons have been practising air tactics in a multinational environment in preparation for future Coalition operations in the Middle East and elsewhere.

“This is the first time that Typhoon has deployed to Greece. This Exercise offers us a great opportunity to prepare for future operations and strengthens our existing relationship with the Greek Armed Forces.”

“The exercise is run annually and is based at the Hellenic Air Force’s facilities at the Air Tactics Centre on the Andravida Air Base, located in the Northwest Peloponnese.

The exercise will last for 15 days and the intention is to provide high quality training, which is achieved by creating a realistic battle environment.  Participating personnel are exposed to an intensive battle rhythm with realistic attrition rates and challenging scenarios that include multiple modern threats and real-time events that are tailored to produce the fog of war. This therefore tests both the physical and psychological endurance of the airman.”

“Six jets from the Lincolnshire based 3 (Fighter) Squadron are in Greece to test their skills alongside the Hellenic Air Force and also pilots from America, Italy, and the United Arab Emirates.”

Anybody want to explain why Israel was left out of the above statement:
https://www.haaretz.com/israel-news/who-s-hiding-iaf-participation-in-major-exercise-with-uae-1.5919421

I think the whole facade of established ruling families of Saudi/UAE not recognising Israel is all but over. The Saudi’s and Israel have collaborated against Iran for decades (the enemy of my enemy is my friend and all that).
Unfortunately if ordinary citizens in those countries where to get wind of any kind of acceptance of Israel the same ruling families would find themselves chucked out on their ear.

The Arab nations despise Israel, but they fear the Iranians.

It could be said that Israel has had the most recent experience in combat with a peer opponent, especially when you regard the border disputes/incursions it has had with Syria over the last 10 years. Syria with the backing of Russia has had a relatively modern SAM network. This has definitely been upgraded since Russia has become an overt player in the region. I wouldn’t be surprised if their S400 was networked with the Syrian SA8, 9 and 11s. The other countries that surround Israel i.e. Lebanon and Jordan are not in a position to compete with Israel. The other… Read more »