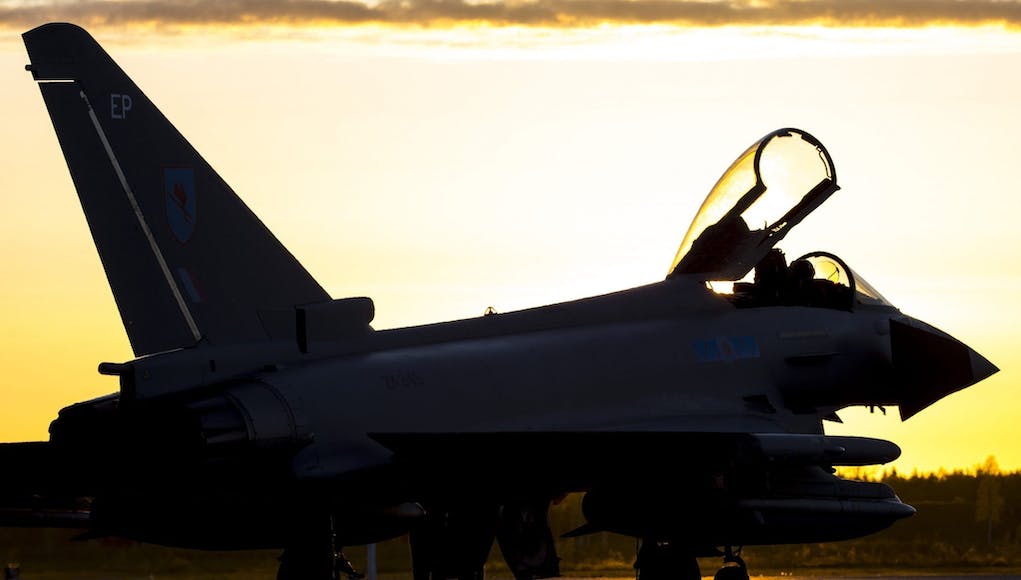 Four Typhoons from 3 Squadron have this week been undertaking Air-Land Integration training with the NATO Enhanced Forward Presence battlegroup in Estonia.

The aircraft based at RAF Coningsby have been operating with the British Army Battlegroup currently deployed in Estonia according to a press release. The training reportedly focused on working with the Joint Terminal Attack Controllers and those of NATO allies; Estonia, Latvia and Slovenia.

According to the RAF:

“Joint Terminal Attack Controllers usually known just as JTACs are personnel who are able to direct the action of combat aircraft engaged in close air support and other offensive air operations from a forward position on the ground.

The training has also gave the pilots flying time over an unusual and challenging environment, whilst continuing to build upon strong relationships between the UK and other allied NATO nations.”

The UK led multi-national battlegroup, which also has personnel from France and Denmark, is part of the 1st Estonian Infantry Brigade.

It forms part of the wider NATO Enhanced Forward Presence, with multinational forces deployed across the Baltic States and Poland, led by the US, Canada and Germany.

The UK has a further 150 soldiers based in Poland, part of the US led battlegroup and RAF Typhoons have recently completed a four month deployment to Romania, patrolling the Black Sea skies.

During the second half of the 20th-century, war and immediate nuclear destruction by the Russians were just minutes away. Somehow, we all lived with that sword of Damaclese hanging over our daily lives, and put such horrors to the back of the mind. Though the nuclear component may have reseeded a little in terms of immediate reprisal, the minutes have not diminished nor lengthened. I feel some disquiet, that UK forces are deployed along the most sensitive zone along the Russian border with Estonia. The Uk along with Estonian and French troops are just minutes away from conflict with Russian… Read more »

Yes, you are correct, when I said Balkans I meant Baltic, which I’m aware is geographically apart. It was a mental block. Sadly, it makes no difference to my prophetic worries about just how dangerous the situation is. Russia is not like any country we have fought against since WW2, and if provoked will spill a military bile across Eastern Europe, that will be catastrophic for all of us.

Provoked being the key word there. NATO should be very careful.