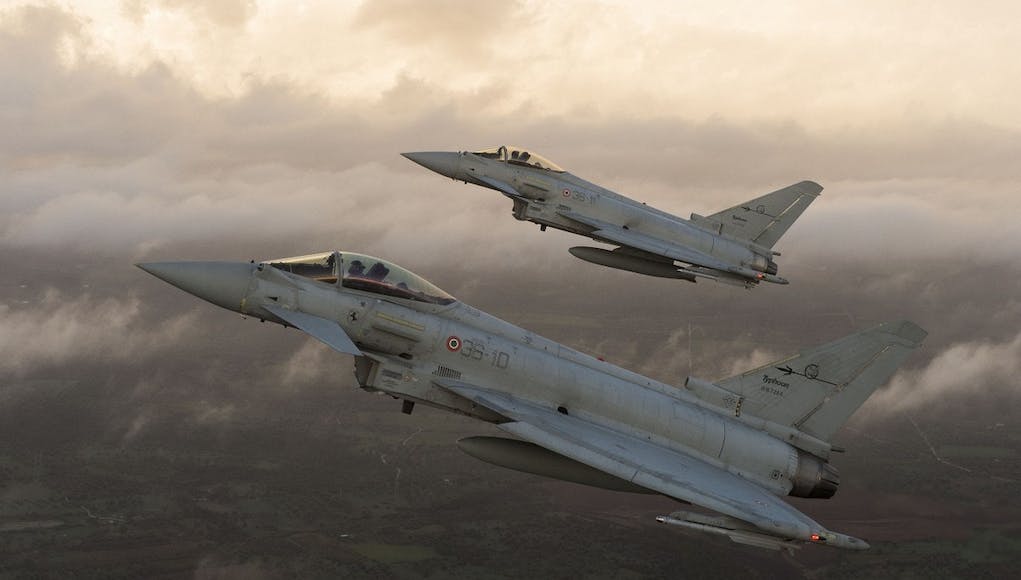 Italy and defence firm Leonardo have submitted their offer to the Bulgarian Ministry of Defence in response to the recent Request for Proposal for the acquisition of eight fighter aircraft to replace their ageing fleet.

The offer is based on the supply to the Bulgarian Air Force of Tranche 1 Typhoons from the Italian Air Force and includes also the option for the delivery of newly built aircraft as requested by Bulgaria. The proposal covers aircraft acquisition as well as training, three years in service support and weapons say Eurofighter.

Eurofighter said in a statement about the bid:

“Eurofighter Typhoon is the biggest and most successful defence collaboration project ever undertaken in Europe.  It is and will remain the backbone of NATO’s European air defence for the next decades and will be a central pillar of any European future combat air system.”

With 623 aircraft ordered, Eurofighter Typhoon is the largest military procurement programme in Europe.

Bulgaria should go for the Gripen as its the best value new airframe with low running costs. The next best option would be the F16, I understand Israel is offering these. My reason is the last thing we want is a NATO member with grounded aircraft because they can’t afford to maintain them. I can’t see Tranche 1 Typhoons being cheap to fly and can they really afford new Typhoons.

Lastly there’s a fair amount of UK kit in the Gripen so new sales would benefit the UK.

It would be secondhand Gripen C from the Swedes.

The issue for me is that the Eastern European nations need an aircraft that can match the latest versions of sukhoi su30+ series aircraft. Not sure the Gripen can do that with a good odds ratio. It is not about putting up an aircraft that is likely to be defeated with loss of life but more about a viable conventional deterrent. Eurofighter is a viable deterrent. Even tranche 1 aircraft are superior to all but the few, very best aircraft Russia can field. I would like to see the richer EU countries purchase more tranche 3+4 aircraft and the Eastern… Read more »

A new Girpen would be far superior to a Tranche 1 Typhoon, however Bulgaria can’t afford them. They will either purchase refurbished F16’s or the Italian Typhoons based on condition and running costs. If the F16’s are from Israel they are bound to be knackered.

I believe the Gripen has a better radar than the Tranche 1 Typhoon and is qualified for Meteor, the T1 Typhoon isn’t. would interesting to know what the T1s are going for. Spain offered used T1 Typhoons to Peru for 61m Euro each which I believe is more than a Gripen.

Looks like Israel didn’t respond but the US did with the F18 and F16.

Gripen has a mechanically scanned (PS-05/A); it shares a lot of technology with Captor but with lower performance because of its reduced size and power. Gripen E will have an AESA version (ES-05/A) and will be an attractive option.

Gripen C’s radar is a smaller variant of the radar currently fitted to Typhoon. It is much less capable. As to Meteor its unlikely the Bulgarians can afford it. In fact I’d be surprised if they even got Amraam’s. At best they’d get someones old Amraam B’s or C-5’s if they’re lucky, no chance of C-7’s or D’s. Not all of the Gripens are Meteor capable as it requires upgrades. Gripen E will be, but that isn’t in the mix it would be bought or leased Gripen C from the Swedes. A good aircraft, but also very limited. Probably the… Read more »

Bulgaria has a much smaller GDP than Scotland. Modern, capable fighter aircraft are prohibitively expensive to buy in numbers.

Overseas development aid? Aiding a democratic country with their security anyone?

Would prefer our money being retained in the UK to fund UK issues. Like the national infrastructure fund or to pump money into social care which is currently in crises due to austerity and governmental cuts.

Britain’s aim with any diverted money needs to be to raised GDP per person. Same people making more money = more money for services with no increase the volume of those using these services. So social care would get more funds but so would the MoD and other departments. Pumping money into social care is a one off hit with no return and appears to the right thing to do but its the short term solution. National infrastructure would reap productivity rewards if done right.

Social care is a fundamental requirement to keep our nation working, not investing the correct amount in it: 1)reduces the productivity of your workforce ( if social care are not looking after a disabled child or frail elderly person then their working age productive, engineer, teacher etc relatives will be). 2) means far more expensive acute health care services, provided by expensive ( comparative to domicilary care workforce) and harder to train/find Drs and Nurses get inundated with the frail elderly who could have stayed at home (for an extra £40 a day) instead take up a £200 day +treatment… Read more »

‘Pumping money into social care is a one off hit with no return and appears to the right thing to do but its the short term solution. National infrastructure would reap productivity rewards if done right’

Certainly agree about national infrastructure but not about social care. Help people in these areas gives you a long term gain as they are less likely to have children or families with the same problems.

Bulgaria is a tiny country with a tiny budget. Instead of buying planes they can’t afford they should spend it on infrastructure and police. And let their bigger and powerful NATO friends take care of the sky above.

Yes but Mrs May says austerity is over. There’s bound to be billions on its way to each government department ?. But seriously, we have talked about the benefits of selling war ships at an earlier date so we don’t have huge costs to refurb and upgrade, and renew with the latest platforms. Why can’t we do this with planes, thereby stimulating industry, lower maintenance costs, greater availability etc, then selling our older but still good assets to poorer NATO or friendly nations to aid there own self defence, thus taking the pressure of ours? We could also sell some… Read more »

Because Bulgaria is one of the poorest countries in Europe.

I think as a nation and collectively we need to be upgrading our armed forces.

How many countries are considering a typhoon purchase? Chances?

Anyone in the know?

Anthony – wiki lists pretty well all the successful,potential and failed bids to sell Typhoon around the world,out of your list I would say Germany would be my favorite,if that was the case Belgium’s choice might be easier,but as ive never been a gambling man I wouldn’t put too much faith in my assumptions to be honest.

Hi. I don’t think typhoon can drop nuclear bombs, so presumably this will be the main barrier.

How many nuclear armed countries either use Typhoon or are seen as realistic potential buyers?

It’s not cleared for B-61 at present. But there is nothing to stop the Germans in particular paying for the test and integration effort.
There is a good reason why this hasn’t been done already (apart from cost and necessity) and thats because the US is at this moment upgrading all of their B-61 stockpile to one new variant. All of the sub-variants that exist will be upgraded. That upgrade campaign is underway at present. Not much point integrating variants that won’t exist in the next couple of years…

Personally I think the best option for Bulgaria and similar NATO countries with a small GDP is lease hire. Therefor much like a car PCP you have a choice after 3 years of either an outright purchase, swap for a new upgraded version, or send back for refurbishment. This way the country will have an aircraft that is on par with the top NATO countries. Also the deal would include a full logistics, support and training package. Surely this would better for everyone’s interest rather tired hand me downs. The Typhoon could easily be modified to carry nuclear weapons although… Read more »

Have you told the Luftwaffe that Typhoon can easily be upgraded to carry nukes? Because that is not true and you omit mention of cost. Show again in the mirning 😉

Davey- that’s pretty much the arrangement the Czech Republic and Hungary have used for their use of Gripens from surplus Swedish stock as far as I know.

That is a lot of well paid nonsense nothing jobs. How do I apply. They are all earning more than me and I have worked in the public sector frontline for +20 years. Sad indictment of where we are as a nation

Morning
It will be run costs (cost per hour) that decides and unless the Italians are doing something we don’t know about then it’s going to be a tough sell.
F-16, too old – well used by the israeli’s but as the rest of European NATO nations divest their F-16 fleets for F-35 the Bulgarians would be hot by higher maintenance costs as the F-16 hubs are closed.
Grippen C would satisfy their requirements and would put them on a steady upgrade path to the E – at a cost that could be afforded.

Defence secretary to push for air strikes in Syria