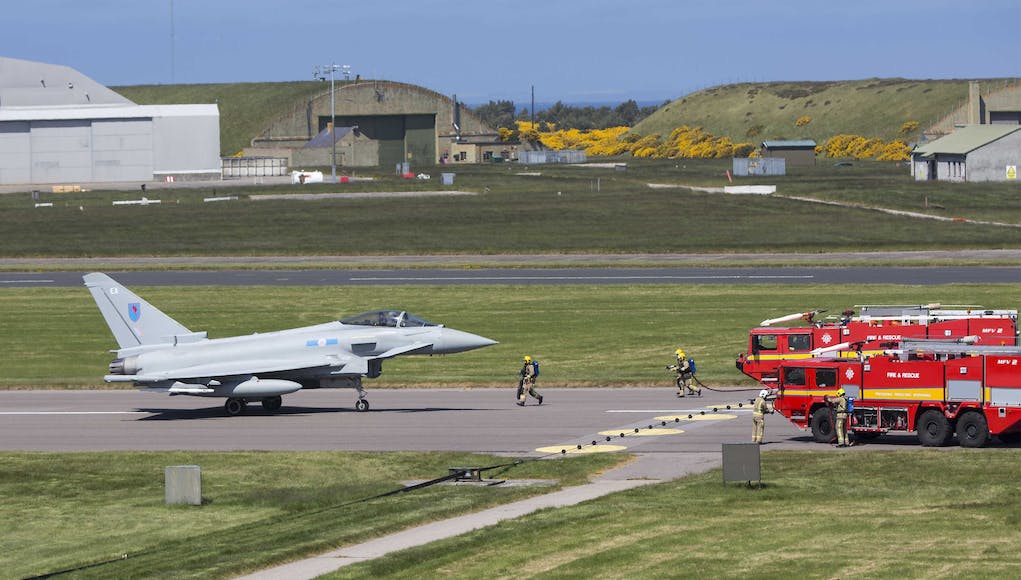 Typhoon jets landed at Kinloss, which is now an army barracks, to test how crews respond.

Kinloss Barracks is a former Royal Air Force station in the north of Scotland. The RAF station opened on in April 1939 and served as a training establishment during the Second World War. After the war it was handed over to Coastal Command to watch over Russian ships and submarines in the Norwegian Sea. Until 2010 it was the main base for the RAF’s fleet of Nimrod MR2 maritime patrol aircraft.

It was intended that the MR2 would be replaced by the Nimrod MRA4, but the MRA4 was cancelled in the Strategic Defence and Security Review of October 2010. This meant that Kinloss was no longer required by the RAF. Regular flying operations ceased in July 2011. However, the runways are still maintained to be used as a relief landing site, e.g. from RAF Lossiemouth in this case.

In November 2011 the Ministry of Defence and 12 (Air Support) Engineer Group announced that 930 Service personnel from 39 Engineer Regiment (Air Support) would move from Waterbeach Barracks, near Cambridge, to Kinloss in summer 2012.

“As we had not had to use Kinloss for a real Typhoon diversion, since its inception as a Relief Landing Ground, we planned this exercise in order to practice our procedures and aircraft recovery actions.

The exercise was an opportunity for the fire section, in particular, to practice their actions after the use of the Runway Hydraulic Arrestor Gear, alongside ground engineering personnel, and also for dealing with an aircraft with hot brakes.

All our procedures worked well and the exercise provided excellent training for the RAF personnel, based at Kinloss, as well as the Typhoon crews at RAF Lossiemouth.”

Tornado jets have already used the landing strip since it was transferred to the army. The exercise at the barracks will need to be repeated in the future to ensure that current procedures remain fit for purpose.

Plans to reopen it once the P8 Poseidon arrive?

Neptune? It’s all Greek to me 🙂

Only the Indian aircraft are Neptune, the UK ones will use Poseidon

The P8 is gonna be based at Lossiemouth

No at present the published plan is to base the P8s (Poseidens!) at Lossie. Reopening a full airbase would cost a large (and unavailable sum) never mind the annual running costs – one of the main reasons it was closed in the first place. However maybe SDSR2020 may provide an opportunity to reconsider this given by then there will be 2 more Typhoon squadrons with at least one based at Lossie, and the RAF’s aspiration to move to an eventual 15 aircraft P8 fleet will force such a rethink. For sure we can expect greater use of the RLG function… Read more »

It was stupid having Lossiemouth and Kinloss so close in the first place. Leuchars was the much better positioned airbase for many reasons.

Oh Dear …. Banging that drum is both pointless as well as missing the reasons it all happened. How much do you think it costs per year to keep an airbase open and active? Maybe we should close a hospital or two to pay for it?

I’m sure it’s because of the ground geology under the runway at Leuchars that the decision was taken to close it as an airbase..

What? No it was the lack of money post SDSR10 despite having invested many £Ms to make it a fully modern and capable Typhoon base.

All bases in Scotland should be closed.

Thank you for that “useful” contribution Oliver

Leeming has only 100 squadron of Hawks and could handle the extra Typhoon units if and when they are ever stood up.

A possibility for sure but has had no Typhoon infra investment so maybe unlikely in these cash strapped times. Leeming was part of the original 3 Typhoon base plan 10 years ago when we were to buy 232 and have 9 squadrons ….. But

Someone not get the memo?

Waterbeach Barracks, near Cambridge was in fact another old RAF station taken over by the Army. 39 Engineer Regiment (Air Support) was made up of many Fijians who’d joined the British Army. Poor so ‘n’ so’s, the north of Scotland must have been a shock for them. The Waterbeach Barracks will now be turned into a new satillite large village/town to Cambridge.

Surprised there’s anything left of it since those thick fucks have residence there with a history of meat headed destruction to fill their time.

That was a useful addition to the discussion Oliver! !!!!!