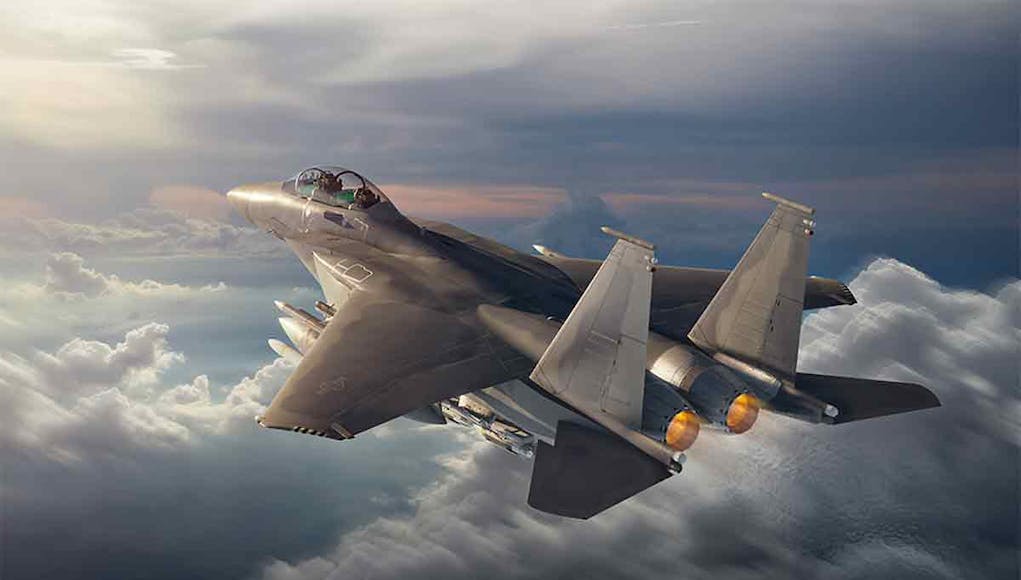 The U.S. Air Force have officially accepted the first F-15EX from Boeing.

The U.S. Air Force say that the new fighter is a two-seat aircraft—though operable by a single pilot—with fly-by-wire flight controls, digital cockpit displays, and advanced avionics systems, to include the Eagle Passive/Active Warning and Survivability System, an electronic warfare upgrade also being fielded on F-15E Strike Eagle models.

“This is a big moment for the Air Force,” said Col. Sean Dorey, F-15EX program manager with the U.S. Air Force, in a news release.

“With its large weapons capacity, digital backbone, and open architecture, the F-15EX will be a key element of our tactical fighter fleet and complement 5th-generation assets. In addition, it’s capable of carrying hypersonic weapons, giving it a niche role in future near-peer conflicts.”

“At an average age of more than 37 years, the F-15C/D fleet is fast approaching the end of its useful life and operating on the margins of structural integrity. The F‑15EX provides a cost-effective and expedient solution to refresh the F‑15C/D fleet and augment the F-15E fleet to meet National Defense Strategy capability and capacity requirements well into the 2040s, while preserving aircraft availability from significant impacts that service life extension and modernization programs would have on the F-15C/D fleet.”

I wonder if we can expect to see a large order placed by the US Airforce for a fleet of new F16V’s in the near future or a clean sheet design?

They should just buy some Typhoons. ?

The penny is dropping that trying to field an all 5th gen fleet is painfully expensive and not necessary to remain competitive.

They will no doubt curtail F35 and back-fill with both new F15’s and possibly other cheaper options.

No bad thing – a small amount of 5th gen stealth aircraft to kick down the door and large amounts of 4.5 gen aircraft with top notch stand-off weapons to do the grunt work.

Totally agree. F-35 has turned out to be far too expensive to operate at a fleet over 1000

Totally agree with you Nigel, not everything needs to be or indeed needs to cost as much as a 5th gen airframe.
Perhaps thats what the RAF should have looked at a dcade or so ago, some form of low end solution with low operating costs to bomb caves and sandpits. Might save and extend the life of high tech jets if we had….

Agreed, We have plenty of options available for Typhoon. LERX: “When compared to a standard Eurofighter Typhoon lacking the AMK retrofit, the enhanced Typhoon’s angle of attack (AoA) was 45% greater, with faster roll rates around 100% higher.” Thrust vectoring: “According to Eurojet, a Typhoon equipped with thrust vectoring nozzles (TVN) could reduce fuel burn on a typical mission by up to 5%, while increasing available thrust in supersonic cruise by up to 7%. Typhoon is already capable of performing ‘supercruise (flying supersonically without afterburner) and the proposed modification will further increase this capability. Other cost-saving aspects of thrust vectoring… Read more »

The low-end tech solution for Afghanistan was argued for by some pretty respected high rankers. We had a surplus Tucano stock. Instead, the hours on Harrier and Tornado airframes were increased at a cost. So we had the scenario where high-end aircraft were being used at Lord knows how much per hour. Some argued that the Harrier use was part of a “plan” to inflate JSF “need”. Don’t know if that’s the case but it seems to be how many think. There seems to be a reality dawning in the USAF at least, some airframes are best for certain jobs… Read more »

Hi Jan, have to agree with you about industry pushing high end solutions, however, there has to be some compliance from senior people in the MOD/AF for it to happen. I understand the need to get value from designs, but as we are now seeing, one size doesn’t necessarily fit all.
In the 80’s, the RAF had some 4/5 different airframes to cover all tasking, now we have one, with a second to come over the next few years…..

It is a sad fact that these contractors are multinational now. I take your point on legacy airframes. A small number of COIN airframes for contingency purposes would make good sense to me. Ironically Pucara/Bronco types spring to mind, and Cessna did a company build demonstrater with COIN in mind, though l recall Super Tucano won the favour of the USAF study on it. As for the compliance of Mod and senior Air staff, it would be easy to carp, but it’s true for all equipment. That’s why Dominic Cummings spoke a lot of sense and frightened the hell out… Read more »

And this shows F-35 failure.

No it just shows it is expensive and isn’t needed for all mission types, hence the purchase of cheaper options. Look at the list of countries buying the F35 and its development curve, its in its infancy. Judge it in 15 to 20 years time.

Your comment is a joke. The main reason behind the F15 buy is that the F35 cannot be built quickly enough and is far behind schedule. Boeing’s F15 production line was hot and able to deliver new jets now, and thus giving new wings to the usaf without waiting on an already maxed out f35 production line. The perceived affordability and differing capabilities is icing. The gap being filled is caused by delays to the f35, as I mentioned, but also because of the f22 cancelation, which these F15s would have originally been replaced by. Oh, and another reason for… Read more »

The US Air Force was placed in this position by the decision of Secretary of Defense Robert Gates,(And probably the worst SECDef since Robert McNamara) to curtail production of the F-22 at 186 instead of the planned buy of 381 in 2009. He put the money into the F-35 instead. The US still hasn’t recovered from that stupidity.

The USAF is now buying a 50 years old design. And remember they vouched that all future buys should be stealth designs.
F-35 failed to be the F-16 successor that was supposed to be and forces to USAF to buy non stealth designs.

Actually John, NO. The F35 has nothing to do with this purchase, this is being used to supplement the F22 in a ‘fighter’ role, as already mentioned, the US didnt buy enough F22 due to their costs.
The F35 might be many things, but a dog fighter it isnt, nor was it intended to be one, although, it may have to play this role in some airforces.

Deep32, before you say I’m wrong, how about you know what you’re talking about? The F15EX will in no way bridge the gap left by the F22 cancelation and will not be used as an air superiority fighter. The F35 will kick in the door while the F15 will be a standoff weapon platform/bomb truck. Your suggestion of the inverse is laughable. Countless exercises have shown in a2a that the F35 would crush the F15. USAF Chief of Staff Goldstein said in 2019: “We’ve got to refresh the F-15C fleet because I can’t afford to not have that capacity to… Read more »

Hi John, sorry fella, we are going to have to agree to disagree on this issue. The F15EX is a replacement for the C/D version which is an air superiority fighter and is not a bomb truck as you allude to, that’s the F15E (Strike Eagle) a different plane which is designed to be a stand off won platform/bomb truck. You are getting it F15 versions confused!!! The F35 was never intended to be used as a air superiority fighter in the USAF, that is the domain of the F22/15. As they don’t have enough F22’s they are assisted/supplemented by… Read more »

The F-15EX has a totally different mission than the F-35 or even the Raptor. It’s a long range, heavy lift fighter that carries vasty more ordinance than those stealth fighters and can carry many more types of weapons. The F-35 or Raptor was never meant to replace the F-15E.

Never meant to and is are two different things. When the f22 program was killed that was exactly the plan. The USAF has published plans stating exactly that… to replace f15s with f35s.

I brought quotes from the usaf in a similar reply, you bring your sources, please.

Ask the Israeli air force if they share that opinion

The F-35 is a Ferrari, [Air Force Chief of Staff Gen. Charles Brown Jr.] told reporters last Wednesday. “You don’t drive your Ferrari to work every day, you only drive it on Sundays. This is our ‘high end’ [fighter], we want to make sure we don’t use it all for the low-end fight.” …

The Main Issue with the F35 is it’s Operating Costs – the USAF have set a Goal of no more than $25,000 per Flying Hour,the F35 exceeds this by some margin,the F15 gets a bit Closer,thats why there is talk of an F16 clean sheet replacement.

This just shows how old aircraft can be nicely updated.
It’ll be interesting to see how new users of the Eurofighter update it in the next 2 or 3 decades as I think it can stay a great aircraft for quite a long time.

Iconic fighter made even better with many more years of service ?

We may find out how it compares to the Typhoon soon enough. The Qatari or Saudi jets would start to give an idea, as well, as they’re similar.

We can change everything except the body it seems, yet we can bolt wedge tails on to passenger airliners, turn the F16 into an “F21”, so why can’t we give original airframes new “stealthier” bodies, a face lift if you like? Yes it’s not ideal but it is incremental improvement. With AI and genetic algorithms youd have thought it possible to generate a stealthier body that remains true in most ways to the seed input, whether an F15 or a Typhoon…

Boeing has given a Stealth Makeover to the Eagle ( F15SE) but as yet none have gained any Orders.

I heard that the silent eagle was a bit of a flop… not only in sales but also in its stealth offering. The RCS was still quite large for a plane with such a name.

Until then we have a very useful EW suite, Brite Cloud and no doubt a very good understanding of the type of radar absorbing materials used on the F35.