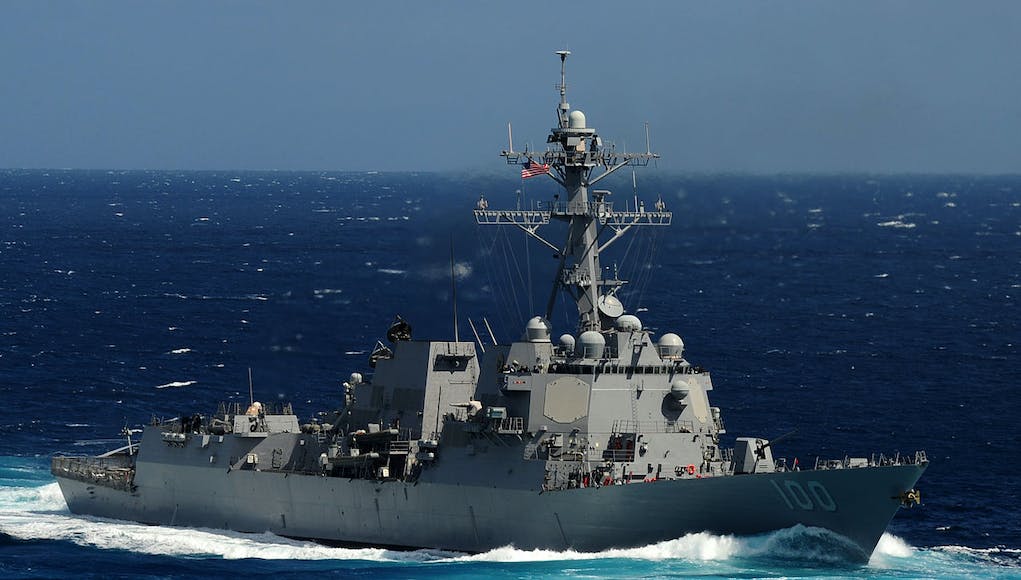 The Arleigh Burke-class guided missile destroyer USS Kidd (DDG-100) has had its official Facebook account hijacked by a light-hearted hacker who has been livestreaming himself
playing ‘Age of Empires’ on the page.

This article was submitted by Sam Wheeler.

The breach of the Facebook account appears to of occurred sometime on Tuesday 30th September 2021 and streams have been going up every day since. 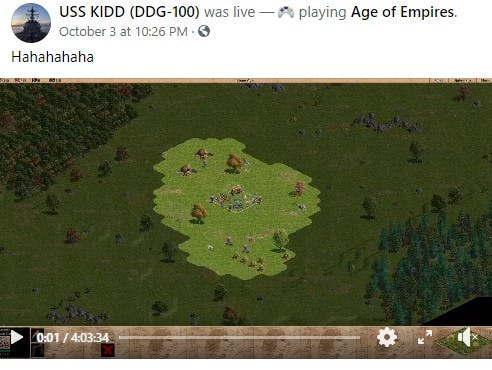 The US Navy still does not have control over the account, and whoever has taken control of the warship’s account has changed the page category to ‘Gaming Video Creator’.

When approached for comment, a Navy spokesperson, Cmdr. Nicole Schwegman, has said:

“The official Facebook page for USS Kidd (DDG-100) was hacked. We are currently working with Facebook technical support to resolve the issue.”

When probed a little further about how the hack had taken place, Cmdr. Schwegman stated that:

Several livestreams have appeared on the page over the past few days, the first appearing on Sunday at 2226hrs local time with the title ‘Hahahaha’.

Shortly after, a second video was posted at 0237 on Monday morning with the title ‘play game’ Three more videos followed with the final one being posted on Monday October 4th titled ‘POSC’.

Social Media Networks, Weapons of mass destruction I wonder if it was only their Facebook account that was hacked into but then again they won’t be telling the world if any thing else was WOT no Protocols in place who,,Where, Why, will have too be asked, Adept cyber savvy Teenages, messing around or something more Sinister? Where did it emanate from?

The Big Man
Reply to  Tommo

Apart from the fact it has not happened yet, I can’t see the ships CIC using the same platform as Facebook.

Tommo
Reply to  The Big Man

Any Chink in the Armour, so too speak the Attack on Facebook could also be akin to a trajan horse, Or the Magician’s slight of hand Misdirection maybe it is kids messing around, It would have been traced by now anyway wouldn’t it ?

Tommo
Reply to  The Big Man

DO, the US military still have their Psychic development unit The Men Who Stare At Goats , if so their just giving at heads up too the Future Hacker NOT to Do it

The Facebook account would be no different to anyone else’s. It is completely independent from any system or software on the actual ship.

It’s the double-edged sword of modern life, unfortunately. Various outlets and organisations around the world have turned to the use of social media to increase their online presence and promote what they do. That’s no different for branches of the military, or in this case, an individual vessel. The Royal Navy in particular has created profiles on Twitter for most of the surface fleet (including the RFA), with only submarines excluded. In practice, this means that TweetOs can share what the vessels have been doing, which in turn helps recruitment, showcases their work to the taxpayer and (for families) acts… Read more »

Much appreciated Lusty the generation that now man’s our Naval vessels are indeed grafted too their devices , is there a ruling on mobile devices on board , like not allowed in places Such as Ops rm MCO ,Computer rm .One never knows what is embedded deep within said Devices .

Mobiles are allowed, but (if I recall) their use needs to be authorised by command and even then, you’re limited by network ranges and OPSEC and COMSEC. All mobiles should be registered and using them during periods where you’re not meant to be could result in them being confiscated. An individual might want to limit their use even further, as one could quite easily ramp up a bucket load of costs associated with their use – especially when overseas. All personnel have access to email, sat phones, WelComE and postal services, which might be preferable (though no Tinder! ﻿😂﻿). For… Read more »

I remember that ,personal, in theory were supposed too Register Cameras with the Reg staff , never saw that happen , I would expect mobile phones are different Kettle of Fish altogether. And as these item’s are multimedia functional devices would have too be registered with the Reg staff just in case

I had one lad in my division run up a 1500 quid phone bill using his mobile off of West Africa. Upper deck every night looking for a signal to phone his GF. Not a scoobie what it was costing him until the Direct Debit hit his bank account and the cheques written for his run ashores went boing. Never ever use your phone on a ship with CTs onboard. They like nothing more than listening in to booty calls! Phone jammers exist and can be used if needed for Opsec… It was somuch more secure when all you got… Read more »

Gunbuster ,when CDs were prancing round with those Brick phones we were stationed in jebal Ali 88/89 we had a land line with trusty Phone Log , Honestly being the Key 1,of the diving branch would be phoning Canada every night and Logging 5 mins call time unbeknownst too him the Ships supply officer was getting an itemised bill through providers ,whoops done think he saw any of his LOA or dive pay when he got his bill. Back to Blueys for him

I was doing Gulf patrol on Brum around that time…we took the Scum through the SOH on her low loader… That was a good photo op!
The Dilly naval party lost a few guys in a car crash if I remember?

We had too esxort through to jebal Ali , A
little Hunt escorting a 42 all closed up in the straits her with pumps running lovely view of her Seadart mag from the outside The Dil lost them apparently hitting a Camel ?

Andy a
Reply to  Lusty

Have I been asleep for a couple of months?

I was just wondering the same, is time travel involved here? Maybe this hacker could be an interesting person to know!

Something odd happened to the Doctor Who accounts as well. Maybe someone got control of the TARDIS and went forward in time to bring us this story from November 2021? ﻿😃﻿

But the Kidd has been hacked? You’ve got to be kidding me.

It wasn’t the Kidd; the US military hasn’t been hacked. People are thinking US security protocols have been hacked but realistically it’s just Facebook. The Kidd doesn’t have a specially protected Facebook account.

I know full well. Let me make my shit jokes and puns in peace. 🙂

Oops 😂 didn’t see that. good one

So I would just love to have a recording of the help desk call from the US navy to the Facebook tec unhelpful desk.

Man, that is one badass (and heavily-armed) ship!

Offer him a job at the NSA.

But they missed a trick here. Why didn’t they play World of Warships?!?!?!

Lusty is ashamed and disappointed.

Or a a game of harpoon or even red storm rising, old but great games.

posting Uckers on a USN ships Facebook page, that would work.

Portsmouth Naval Dockyard 23rd Oct have just held the RN UCKERS competition 32 teams entered for it Johnathan made the Pompey evening News there was No up tables off bits mentioned seems quite tame , nothing like how we used too play