The Defence Secretary also commended the role the UAE, a Global Coalition partner, has played in the fight against Daesh.

“Our long-standing and deep relationship with our Gulf partners epitomises Britain’s global outlook. Be it through our involvement in the Duqm port project in Oman or the opening of the Naval Support Facility in Bahrain, we are committed to regional security and stability.

Gulf security is our security and what happens in the Gulf has a direct impact on the security of the British public at home.”

“The Defence Secretary also visited personnel on board HMS Middleton and HMS Bangor, which were alongside at Port Zayed. Mr Williamson reiterated how grateful he was for the access and facilities that the UAE provides the UK. The UAE is the most visited port globally by the Royal Navy, highlighting the value Britain places on this relationship in its support to regional stability and security.

The officials also reviewed the work taking place at the Duqm port facilities which, in time, will host UK warships and is large enough to welcome the aircraft carriers HMS Queen Elizabeth and HMS Prince of Wales.

We are a net importer of oil and gas now TH.

So until that changes, I think this is a rather a sensible use of funds.

What does sop mean?

Funding national security is not a nice to have or something optional. I do agree cut backs in government spending are required but this should be targeted at overseas aid which is often wasted in order to meet a 0.7% target, and the enormous public sector pension funding gap. If civil servants where brought in line with everyone else, where they receive what they put in to their pension like everyone else, the UK’s liabilities would drop dramatically.

“RFA Cardigan Bay leads Minehunters in the Gulf”-that is one impressive minehunter at the rear of the flotilla!!

Maybe Cardigan Bay was leading because the T45 was under tow!

It is high but a little context please. 70% of it is owned by UK banks and pension funds, including the Bank of England (which the Govt owns). In fact 25% of the total debt is with the BofE, so the Govt owes itself £500bn. I doubt that will ever be repaid, just written off somehow in the future. The interest payments to UK banks and pensions help fund people’s retirement. Yes the total debt needs to peak over the next few years then decline as part of a balanced public spending policy. Just cutting everything willy nilly doesn’t help… Read more »

What’s the difference between that and the common practise of exchange postings, especially with US and Australian forces. Are we borrowing them?? Is our manpower that bad!

You no we’re at a budget surplus now though right?

Oh look THs other account. Somehow and unsurprisingly praising his views that the Military is unnecessary. The media doesn’t cover these demonstrations. Well that would be because they do not exist or wouldn’t even be large enough to notice running down mainstreet in rush hour. A complete load of bull that the Christmas cabal of red and green anti-military socialists and progressives, who make up the media miss any opportunity to bash the Military or their country. That is all the loathsome creatures live for. That and to advocate stealing money they did not earn and to take away Liberty… Read more »

TH is certainly not as mil, as his off repeated gibberish and lack of understanding of military matters constantly shows when he starts to type. And if you read his posts Mr boring veterans for peace, then you would also see that he is certainly spent no time in the military…..but I am presuming you did more than 5 minutes before deciding the job you chose was a little to nasty for you and you left.

Thanks Harold. I have never been in the armed forces. I have my own SME and create employment for others. What really saddens me and more and more others is seeing our hard earned incomes taxed and then those taxes frittered by a government on posing and flouncing around the world showing off. Syria is nothing to do with this country. Trillions of debt is. It’s time to cut back heavily on government spending on vanity projects and to face reality. I ignore the kids on this site who really don’t know the cost of anything. However, I constantly email… Read more »

You don’t know his ex service credentials do you? People of principle? Really? Wow!

TH please don’t refer to me as a kid. I respect your opinion that defence should be cut, you have a right to that view. However I disagree. Wether this tension and potential military action is right or wrong, for me it is highlighting a worrying fact. If we are dragged into a major conflict (sometimes no matter how much you try to avoid something it comes to you anyway) our armed forces are just not equipped for a sustained peer on peer conflict. Too small, lacking in depth, and low on ammunition are but a few issues. I do… Read more »

Your last few sentences. That is indeed what the trolls want.

Procession or demonstration – which is it? Protesting against what war exactly? Who are you protesting against? As far as I am aware the U.K. isn’t actively engaged in any wars at the moment. I applaud you getting out there though, practicing your democratic right to protest and your right of freedom of speech. I forget how those rights were achieved though, in the U.K. and around the world? What I do see though are people in the world struggling to have the same rights you currently enjoy, being repressed, gassed by there own government in some cases – but… Read more »

Its to do with Terms and Conditions.
Loan service usually means you wear the uniform of the Armed services you are loaned to and come under their rules.
Exchange posts mean you keep your uniform and remain under your own countries rules and regs.

It also has lots of tax and bonus implications with regards to your pay at the end of the month.

Its to do with Terms and Conditions.
Loan service usually means you wear the uniform of the Armed services you are loaned to and come under their rules.
Exchange posts mean you keep your uniform and remain under your own countries rules and regs.

It also has lots of tax and bonus implications with regards to your pay at the end of the month.

Thank you so much Gunbuster.

All, please stop rising up to TH’s taunts. It doesn’t become anyone to do so. You’re just wasting your time. Anyway, I presume that when he talks of marching against war he means the war that Russia is waging against Syrians and Ukraine, doesn’t he?

Young Daniele, when you grow up, money will become more relevant to you. When you have to work hard to earn it, your views will change. I don’t see glory in the spending of hard earned tax payer pounds on weapons of war. That doesn’t make a country great. But why does the UK need such vanity anyway? It should be spending its money wisely and in caring for its citizens. And it should also keep its nose out of other people’s affairs. Other countries do, so should this. Indeed, neutrality would benefit the UK as it had done elsewhere.… Read more »

I seem to recall that Britain did the same back in 1939 and we know what happened there. Peace in our time is a fantasy so stop dreaming. 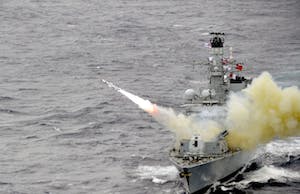 August 2, 2021
HMS Monmouth and HMS Montrose, two Type 23 Frigates, will be given to Greece as part of efforts to 'sweeten the deal' to sell the Type 31.