The British delegation to the Europe’s OSCE watchdog are demanding an answer regarding how a Russian missile system has ended up in the hands of separatist forces in Ukraine.

The TOS-1 “тяжёлая огнемётная система” in Russian (English: Heavy Flamethrower System) is a multiple rocket launcher and thermobaric weapon mounted on a T-72 tank chassis. TOS-1 was designed for defeating enemy personnel in fortifications, in open country, and in lightly armoured vehicles and transport.

The organisation had previously come under criticism in the Russian–Ukraine conflict. During the War in Donbass, an OSCE observer allowed Russian separatists to use the organisation’s marked vehicle, the organisation issued a statement regretting the incident. 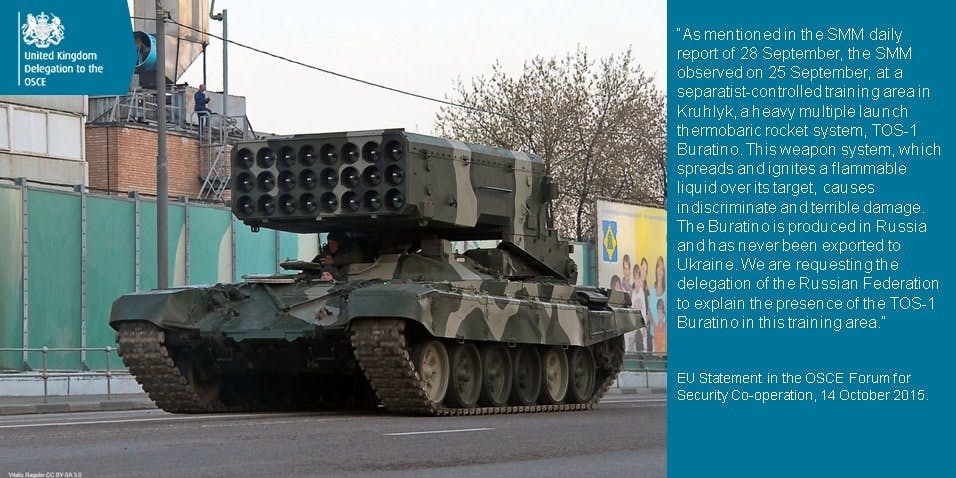 The UK’s Delegation to the OSCE said in a statement:

“The OSCE’s Special Monitoring Mission observed on the 25th September at a separatist-controlled training area in Kruhlyk, a heavy multiple launch thermobaric rocket system, TOS-1 Buratino. This weapon system, which spreads and ignites a flammable liquid over its target, causes indiscriminate and terrible damage. The Buratino is produced in Russia and has never been exported to Ukraine.”

The Organisation for Security and Co-operation in Europe is the world’s largest security-oriented intergovernmental organisation. Its mandate includes issues such as arms control and the promotion of human rights, freedom of the press and fair elections. It employs around 400 people in its secretariat in Vienna, Austria, 200 in its institutions and 2,100 field staff. It has its origins in the 1975 Conference on Security and Co-operation in Europe held in Helsinki, Finland.

I love the UK Arm forces and UKDJ but we are no longer a global player and should concentrate matters at home and affect us directly.

Incorrect. The organisation European Geostrategy rate the United Kingdom as a global power, they define this as: “A country lacking the heft or comprehensive attributes of a superpower, but still with a wide international footprint and [military] means to reach most geopolitical theatres, particularly the Middle East, South-East Asia, East Asia, Africa and South America.” The British Armed Forces comprise the Royal Navy, a blue-water navy with a comprehensive and advanced fleet; the Royal Marines, a highly specialised amphibious light infantry force; the British Army, the UK’s principal land warfare force; and the Royal Air Force, with a diverse operational… Read more »

The legitimate rulers of Ukraine are the Ukrainian Parliament and they don’t want Russian Troops in their country.

The article is Syria

No the article is about Ukraine.

Lol! Bloody join Russia and other good people.. bomb ISIS and the rebels guys, end that quick, while there is the thin opportunity.

This is petite, we have refugee infiltrators to attend to soon.

Russian answer would be dead jihadists…… I’d be happy with that!

They’ve already admitted to giving the Rebels modern weapons in one of their many excuses for MH17 being shot down so not sure why we are even asking!?

Putin does not give a damn how he gets back the land lost since the wall came down…he should be tried as a war criminal…..

those Russian tourists drive anything which is weaponized

Russia is THE axis of evil on earth. They need to be put back into their little box.

What like U.K and U.S never supply any “separatists” around the world weapons and/or training at all..? lol