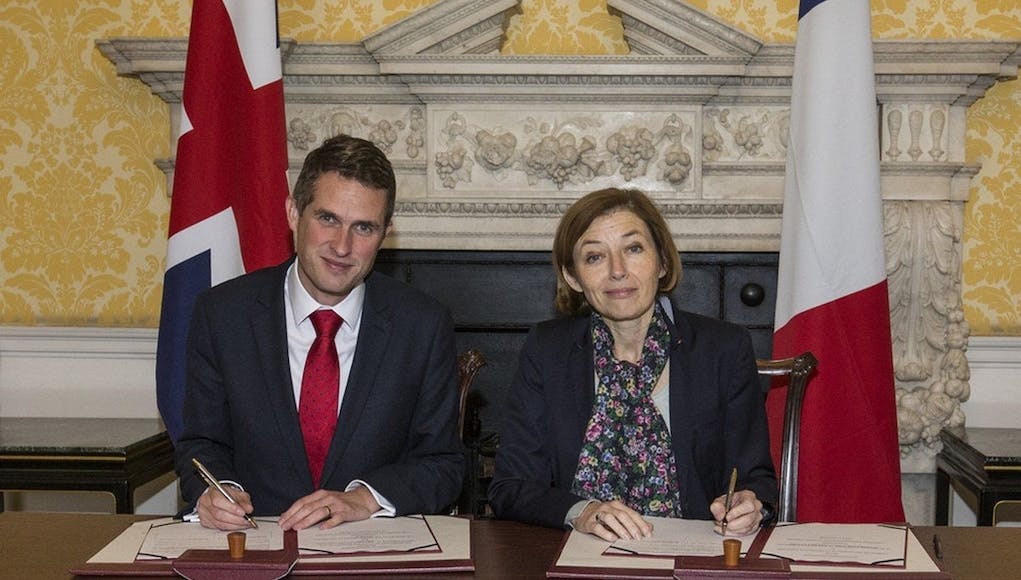 “As we leave the European Union we will continue our relationship with our European allies and a vital part of this will be through our defence relationship.

The Channel is of huge importance to both our countries and this new agreement demonstrates our commitment to work with international partners to help tackle the threat of piracy and terrorism around the globe and protect our people at home. The United Kingdom will always do what is necessary to protect ourselves and will work with our allies, like France, to achieve this.”

The agreement builds on existing maritime cooperation between the Royal Navy and French Navy, which includes joint exercises and intelligence-sharing. It will ensure both countries use the most modern technologies and share knowledge, to help identify suspicious activities and conduct maritime security operations.

The meeting came ahead of the next UK-France Summit in the new year, which will further strengthen the UK and France’s Defence cooperation under the Lancaster House Treaty.

“Following an inspection of a Guard of Honour at Horse Guards Parade, the Defence Secretary and the French Minister of the Armed Forces signed an agreement to increase British and French co-operation on countering terrorism and illegal migration in the Channel, one of the busiest maritime highways in the world.”

Maybe they should start increasing the funding then.

I’m hoping that is because the new Defence Secretary is not signing off on cuts but intends to get more funding. So no announcement today as talks will be ongoing.

Jordan – true, but then again I don’t know anybody who was seriously expecting it to be.

It’s the hope that kills

There has to be a corresponding increase in recruitment.

How much are we going to charge the French for our co operation on defence matters?

Mike, seen as we are the ones gaining out of less illegal immigration across the Channel, I think that it is more likely that they are charging us. Besides, it’s a two way deal, so at the very least we are charging each other the same. It doesn’t appear that they are running to us for help, more the other way around.

Despite the fact they have £80bn trade deficit in their favour.

If EU countries want access to our defence capability then we should charge them.

…Defence is the first duty of our country’s government; concepts connected with Trade but not dependent where strategy is concerned.

More Anglo-French cooperation can only be good thing, something both regional European powers are going to need to work on as we negotiate our exit from the EU.

Despite the inevitable grandstanding and point-scoring on both sides (UK and the EU-27) during these protracted and difficult talks – we need to carry on carrying on working with our French counterparts.

Vive l’Entente, as far as I am concerned. No downside, plenty of upsides whether you call it the channel or la manche!
best Tim

The French have repeatedly stitched up the UK on defence matters.

For example Sepecat Jaguar, AFVG, Lynx helicopters , Horizon destroyers and so on.

We offer the hand of friendship and co operation, they take our wallets.

I am sorry, but: “We offer the hand of friendship and co operation, they take our wallet”. You surely don’t expect this kind of remark to be taken seriously.

And elsewhere you seem to be linking the EU Brexit talks with this agreement with France. Why? the two are completely different.

Thankfully we are going to work more closely together – because the option of not doing so would be worse.
Best Tim

Tim62 – Sorry but when a country (France) is a leading party in the EU that is happy to threaten and blackmail us for its financial gain and be in breach of its own Treaty then they are not “completely different” and are absolutely connected and intertwined and we should not be having anything to do with them.

We should have declined to discuss matters until we are shown some damned respect ….

Hi Chris, The UK-France defence cooperation stands or falls on its own merits. The UK-EU Brexit talks are a different matter. Whether you want to acknowledge it or not is up to you. As for ‘not having anything to do with them’ I am very glad we are. The UK is not going to gain anything by withdrawing into itself – certainly not in defence terms. However, I do wonder whether both France or the UK will gain that much now as post-Libya, are where we both want to deploy military assets actually that aligned? For instance, France is understandably… Read more »

Evening
Don’t forget Typhoon – it is small for a reason, French needed to get it off a carrier.
Jaguar was a very productive bit of kit, especially as it was designed originally as a trainer.
Lynx, too small in today’s world.
Got to admire the French though, when they want something they don’t realyy give a rats how they get it.

I want defence co operation with the USA, Canada, Australia and NZ as a top priority.

Hi Mike
Would it be possible for you to elaborate on what you mean by defence cooperation and why?
Cheers
Lee

In R&D, and other classified stuff between the DSTL and DARPA.
In Submarine operations.
In SF.
In nuclear matters.
And concerning all 4 as part of the Intelligence alliance, our trump card.

While the Tusks, Junckers and Barniers of the EU, led by (currently dysfunctional) German Merkel and Macron in France, are blackmailing, extorting, threatening and otherwise being total bastards to a country that has been their 2nd largest contributor (more than France) and are happily in breach of an International treaty (Lisbon, Article 50) why are we even entertaining any idea of ‘co-operation’? Let alone signing agreements with people who happily ignore them when it suits their politics. The French have also proved especially troublesome and unreliable before and for those two reasons alone we should stay well clear. Sorry what… Read more »

Because we British are total idiots!

And pandering to the EU and others while ignoring our own a pastime of many a politician.
Just look at Mandleson and Campbell egging the EU, foreign powers, on against his own nation.

To me that’s treason.

Why? Why cooperate with France? They are a most unreliable ally Why should we pay the EU £40 billion why should we not just walk away heads held high and leave their stinking mess to themselves? I also noted no extra money for defence in the budget. i guess it is hard to put any extra money into defence when we are about to hand over £40 billion of taxpayers money free of charge and without any liabilities other than ” we please now talk about trade”. Teresa May should hand the EU a £600 billion bill for the UKs… Read more »

Defence expenditure does not normally get announced during the budget so I wouldn’t worry too much about that. We can now worry about everything else!

Just wonder if she mentioned to him that France was supplying 5 Super Etendards to Argentina ?

Anyone know what happened to that Taranis/NEuroN UAV merger the government through a few hundred million at back in 2014?

Joe – Yes. The French took all the clever guidance, control and other technology plus aerodynamic data and are happily building their own to sell to the rest of the EU …

And we think ‘co-operation’ is a good thing…….